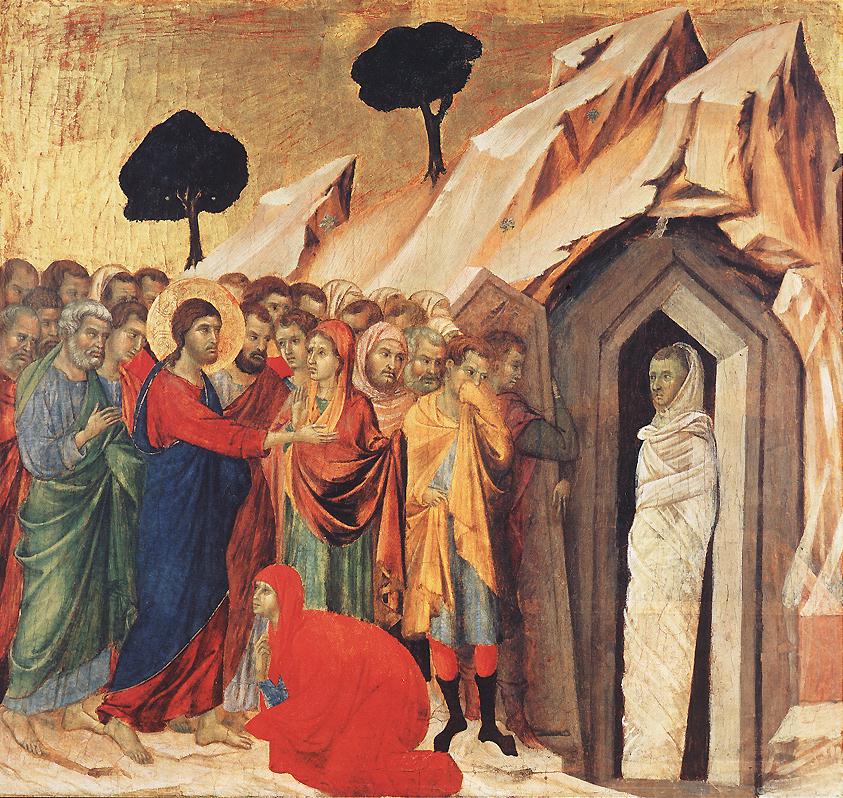 Jesus raises three people from the dead in the Gospel stories: the daughter of Jairus, the son of the widow of Naim, and Lazarus. In the symbolic language of the Gospels, these physical resuscitations are evocative of raisings from sin to spiritual health.

First, St. Augustine says that the young daughter of Jairus, who dies inside her house, symbolizes the sin that takes place in our thoughts and our hearts. That sin has not yet borne fruit in action.

Second, the dead son of the widow of Naim, carried to the gate of the house, represents sin that has expressed itself concretely in action. This dead man is raised and given back to his mother, who stands for the Church.

Thirdly, and most drastically, we have the case of Lazarus. He stands for the worst kind of moral and spiritual corruption, sin that has been expressed in the world and become embedded in evil custom and habit. This is the rot that has really set in, producing a spiritual stink.

In the Gospel of John, the raising of Lazarus takes place just before the Passion, just before the climactic moment when Jesus defeats death by succumbing to it. When told that Lazarus has died, Jesus says, “Our beloved Lazarus has fallen asleep, but I am going there to wake him.” With these words, he signifies we are in a new world. Within the confines of the old world, the old consciousness, death is ultimate, and its very finality gives it its power. However, by referring to it as “sleep,” Jesus is signaling that through God’s power and purpose, death is not ultimate; it is not the final word.

When Jesus first arrives at Bethany, he learns that Lazarus had already been in the tomb four days. This is to signal that there is no mistake; the man is truly and definitively dead. But it is no concern for the one who transcends both space and time, whose power stretches beyond life and death as we know them.

Martha comes out to meet Jesus and indicates her incipient belief in his identity and power: “Lord, if you had been here, my brother never would have died. Even now, I am sure that God will give you whatever you ask him.” Jesus replies, “Your brother will rise again…I am the resurrection and the life.” God hates death and doesn’t want its phony finality to ruin human life.

Coming to Lazarus’s tomb, Jesus feels the deepest emotions and begins to weep. This is God entering into the darkness and confusion and agony of the death of sinners. He doesn’t blithely stand above our situation, but rather takes it on and feels it. But then, like a warrior, he approaches the enemy. “Take away the stone,” he directs.

Those who are stuck within the confines of this world protest, “Lord, surely there will be a stench.” They are essentially saying, “Don’t mess with death; you can’t reverse it. Its power is final.”

But Jesus is undaunted. He commands, “Lazarus, come out!” This is the voice, not simply of a hopeful human being, not simply of a great religious figure; this is the voice of God who hates death and has dominion over it. And therefore, “The dead man came out.” Jesus then orders the onlookers to, “Untie him and let him go free.”

That command still echoes today. Just as he did with Lazarus, Jesus sets us free from death and the ways of death.