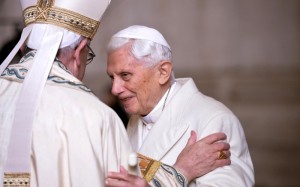 On March 16, speaking publicly on a rare occasion, Pope Benedict XVI gave an interview to Avvenire, the daily newspaper of the Italian Bishops’ Conference, in which he spoke of a “two-sided deep crisis” the Church is facing in the wake of the Second Vatican Council. The report has already hit Germany courtesy of Vaticanist Guiseppe Nardi, of the German Catholic news website Katholisches.info.

Pope Benedict reminds us of the formerly indispensable Catholic conviction of the possibility of the loss of eternal salvation, or that people go to hell:

The missionaries of the 16th century were convinced that the unbaptized person is lost forever. After the [Second Vatican] Council, this conviction was definitely abandoned. The result was a two-sided, deep crisis. Without this attentiveness to the salvation, the Faith loses its foundation.

He also speaks of a “profound evolution of Dogma” with respect to the Dogma that there is no salvation outside the Church. This purported change of dogma has led, in the pope’s eyes, to a loss of the missionary zeal in the Church – “any motivation for a future missionary commitment was removed.”

Pope Benedict asks the piercing question that arose after this palpable change of attitude of the Church: “Why should you try to convince the people to accept the Christian faith when they can be saved even without it?”

As to the other consequences of this new attitude in the Church, Catholics themselves, in Benedict’s eyes, are less attached to their Faith: If there are those who can save their souls with other means, “why should the Christian be bound to the necessity of the Christian Faith and its morality?” asked the pope. And he concludes: “But if Faith and Salvation are not any more interdependent, even Faith becomes less motivating.”

Pope Benedict also refutes both the idea of the “anonymous Christian” as developed by Karl Rahner, as well as the indifferentist idea that all religions are equally valuable and helpful to attain eternal life.

“Even less acceptable is the solution proposed by the pluralistic theories of religion, for which all religions, each in its own way, would be ways of salvation and, in this sense, must be considered equivalent  in their effects,” he said. In this context, he also touches upon the exploratory  ideas of the now-deceased Jesuit Cardinal, Henri de Lubac, about Christ’s putatively “vicarious substitutions” which have to be now again “further reflected upon.”

With regard to man’s relation to technology and to love, Pope Benedict reminds us of the importance of human affection, saying that man still yearns in his heart “that the Good Samaritan come to his aid.”

He continues: “In the harshness of the world of technology – in which feelings do not count anymore – the hope for a saving love grows, a love which would be given freely and generously.”

Benedict also reminds his audience that: “The Church is not self-made, it was created by God and is continuously formed by Him. This finds expression in the Sacraments, above all in that of Baptism: I enter into the Church not by a bureaucratic act, but with the help of this Sacrament.” Benedict also insists that, always, “we need Grace and forgiveness.”