The Catholic News Agency (CNA) news service (which is connected with the late Mother Angelica’s EWTN Catholic television network), has bureaus in a number of countries, and a journalist in the bureau in Germany, Anian Christoph Wimmer, has just published an interview with Spaemann. It appeared in German first and is now out in Italian thanks to the Vatican journalist Sandro Magister. (link)

Spaemann is a professor emeritus of philosophy at the Ludwig-Maximilian University of Munich. He is one of the leading Catholic philosophers and theologians in Germany. He lives in Stuttgart. His latest book published in Italy was God and the World. An Autobiography in the Form of Dialogue, published by Cantagalli in 2014.

Here is my own English translation based on the Italian.

It is worth noting that Spaemann is the same age as Emeritus Pope Benedict, who turned 89 in April.

Spaemann: “It’s chaos made into a principle with the stroke of the pen” 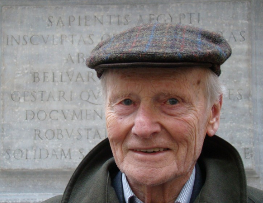 The following is a translation of the interview on Amoris laetitia that Spaemann (photo) gave exclusively to Anian Christoph Wimmer for the German edition of the Catholic News Agency on April 28:
Professor Spaemann, as a philosopher, you followed closely the pontificates of John Paul II and Benedict XVI. Many believers today are asking whether the post-Synodal Exhortation Amoris laetitia of Pope Francis may be read in continuity with the teaching of the Church and of these Popes.

Prof. Robert Spaemann: For most of the text that is possible, even though his line leaves room for conclusions that can not be made compatible with the teaching of the Church. In any case, Article 305, together with footnote 351, which states that the faithful “in an objective situation of sin” may be admitted to the sacraments “because of mitigating factors,” directly contradicts Paragraph 84 of Familiaris Consortio by John Paul II.

Spaemann: John Paul II declares human sexuality “real symbol of the giving of the whole person” and, more precisely, “a union that is not temporary or ad experimentum (“for an experiment”). In Paragraph 84 he affirms, then, with total clarity that the divorced and remarried, if they wish to receive communion, must give up the sexual acts. A change in the practice of the administration of the sacraments would therefore not be a “development” of Familiaris Consortio, as Cardinal Kasper holds, but a break with its essential teaching, on the anthropological and theological level, regarding marriage and human sexuality.

The Church does not have the power, without there being a prior conversion, to give a positive value to sexual relationships, through the administration of the sacraments, dispensing “in advance” the mercy of God. And this remains true no matter what the judgment may be of these situations whether on the moral level or on the human level. In this case, as in the case of women priests, the door here is closed.

Could one not argue that the anthropological and theological considerations you mentioned could perhaps be true, but that the mercy of God is not bound to these limits, but connects to the concrete situation of each person?

Spaemann: The mercy of God is at the heart of the Christian faith in the Incarnation and Redemption. Certainly the gaze of God falls upon every single person in that person’s concrete situation. God knows every single person better than that person knows himself or herself. The Christian life, however, is not an educational exhibition in which one moves toward marriage as toward an ideal, as it seems it is presented in many passages of Amoris laetitia. The entire scope of relations, especially those of a sexual nature, has to do with the dignity of the human person, with the person’s personality and freedom. It has to do with the body as the “temple of God” (1 Cor 6:19). Any violation in this area, no matter how frequent it may have become, is therefore a violation of the relationship with God, to which Christians are called; it is a sin against His holiness, and always and continuously is in need of purification and conversion.

The mercy of God consists precisely in the fact that this conversion is made continuously and ever again possible. This mercy, certainly, is not bound within certain limits, but the Church, for her part, is obliged to preach conversion and does not have the power to go beyond the existing limits by the administration of the sacraments, causing, in this way, some violence against God’s mercy. This would be proud arrogance.

For this reason, the clerics who stick to the existing order do not condemn anyone, but take into account and announce this limit with regard to the holiness of God.

It is a healthy proclamation.

To accuse them unjustly, for doing this, of “hiding themselves behind the teachings of the Church” and of “sitting on the chair of Moses… to throw stones at people’s lives” (Paragraph 305), is something that I do not even want to comment on. I note, just in passing, that this text is exploited, playing on a deliberate misreading of that Gospel passage. Jesus says, in fact, yes, that the Pharisees and scribes sit on the chair of Moses, but he stresses that the disciples have to practice and observe all they say, but do not live like them (Mt 23:2).

The Pope would like us not to focus on the individual phrases of his exhortation, but on the work as a whole…

Spaemann: From my point of view, focusing on the passages cited above  is entirely justified. Before a text of the papal Magisterium, one cannot wait for people to rejoice because it is a nice text and pretend not to notice decisive sentences, that change substantially the teaching of the Church. In this case there is only one clear decision between yes and no. Give or withhold Communion: there is no middle way.

Spaemann: I find it hard to understand what he means. That it is not licit for the Church to personally condemn anyone, let alone eternally — which, thank God, she cannot even do — is something quite clear. But, when it comes to sexual relationships that objectively contradict the ordering of Christian life, then I really would like to know from the Pope after how long and under what circumstances an objectively sinful conduct turns into a conduct pleasing to God.

Here, then, is there really a rupture with the traditional teaching of the Church?

Spaemann: That it is a rupture is something that is seems obvious to any person capable of thinking who reads the texts in question.

How was it possible to come to this rupture?

Spaemann: That Francis positions himself at a critical distance from his predecessor, John Paul II, was already seen when he canonized John Paul together with John XXIII, when he deemed unnecessary for the latter the second miracle that, instead, is canonically required. Many have rightly perceived that choice as manipulative. It seemed that Pope Francis wanted to relativize the importance of John Paul II.

The real problem, though, is an influential current of moral theology, already present among the Jesuits in the 17th century, which supports a mere situational ethics. The quotes of Thomas Aquinas used by the Pope in Amoris laetitia seem to support this line of thought. Here, however, the fact that Thomas Aquinas knows objectively sinful acts, for which admits of no exception linked to situations, is obscured. These acts include disordered sexual behaviors. As he had done already in the 1950s regarding the Jesuit Karl Rahner, in an essay that contains all the essential arguments, still valid today, John Paul II has rejected situation ethics and he condemned it in his encyclical Veritatis Splendor.

Amoris Laetitia also breaks with this magisterial document. In this regard, moreover, do not forget that it was John Paul II who made the theme of his pontificate divine mercy, dedicating to divine mercy his second encyclical, discovering in Krakow the diary of Sister Faustina and, later, canonizing her. He is her authentic interpreter.

What implications do you see for the Church?

Spaemann: The consequences can be seen already. Growing uncertainty, insecurity and confusion: from the episcopal conferences to the last parish priest in the jungle. Just a few days ago, a priest from the Congo expressed to me all his despair in front of this text, and the lack of clear guidance. According to the relevant passages of Amoris laetitia, in the presence of not-better-defined “extenuating circumstances,” not only the divorced and remarried may be admitted to absolution for sins and communion, but everyone living in any “irregular situation,” without requiring them commit themselves to abandon their sexual conduct and, therefore, without full confession and without conversion.

Every priest who holds to the sacramental order hitherto in force may undergo forms of bullying from their faithful and be put under pressure by their bishop. Rome can now impose the directive that from now on only “merciful” bishops will be appointed, bishops who are willing to soften the existing order.

Chaos has been erected as a principle with the stroke of a pen.

The Pope should have known that with such a step he splits the Church and leads her toward a schism.

This schism would not reside at the periphery, but in the very heart of the Church. God forbid.

One thing, however, seems certain: what seemed to be the aspiration of this pontificate — that the Church would transcend her “self-referentialness” in order to go out to meet persons with an open heart — with this papal document has been destroyed for an unforeseeable length of time.

One must now expect a secularizing boost and a further decline in the number of priests in large parts of the world. One can easily verify that, for some time, that the bishops and dioceses with an clear attitude in matters of faith and morals have the highest number of priestly vocations. It must be borne in mind here what St. Paul writes in his letter to the Corinthians: “If the trumpet gives an uncertain sound, who shall prepare himself to the battle?” (1 Cor 14: 8).

What will happen now?

Spaemann: Every cardinal, but also every bishop and priest, is called to defend in their own field of expertise the Catholic sacramental system and to profess it publicly. If the Pope is not willing to introduce corrections, it will be up to the next pontificate to put things back in place officially.