CP&S has posted on this amazing annual event before. It takes place in the Church of the Holy Sepulchre in Jerusalem on the feast of the Orthodox Church’s celebration of Holy Saturday. On 30th April this year, hundreds of pilgrims gathered once more to witness the miracle of the spontaneous lighting of the Holy Fire, and they were not disappointed. There are those who doubt the miracle [see below the following article] and now investigations are underway, but for almost 1.500 years that this has been occurring, not once has any trickery or intent to deceive been detected. Now a new investigation is being made by the Russian priest, Fr Gennady Zaridze.

By Victor Khroul in the Catholic Herald today. 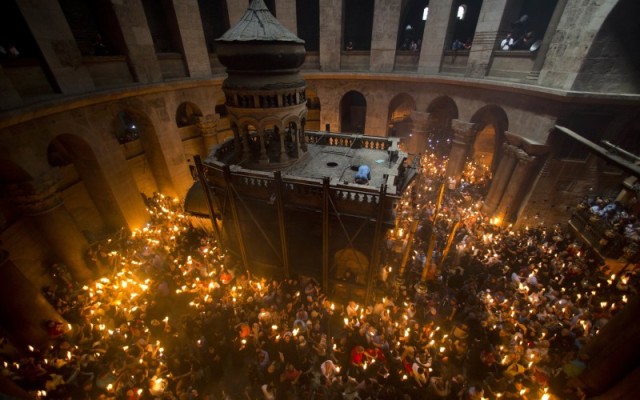 According to tradition, the Holy Fire ignites from the tomb of Jesus Christ at the Church of the Holy Sepulchre in Jerusalem. It has been descending on the church for more than 1,500 years and it is believed that the year when it fails to light will be the last year in humankind’s history.

In those first few moments after it descends, the fire is only slightly warm. Pilgrims can easily take it in their hands and wash their faces in it, without hurting either their hands or faces.

Is this a miracle? Some people, especially non-Orthodox Christians, have their doubts. But there was no doubt in the minds of the 100-plus pilgrims from Russia that they were witnessing a miracle: that was what had brought them to Jerusalem two days previously, on Friday. In total, thousands of Christians gathered in Jerusalem to light torches and candles from the holy flame on the eve of Orthodox Easter.

Orthodox priest Fr Gennady Zaridze from the Russian city of Voronezh was among them. He was there to receive God’s grace transmitted, as he believes, by the Holy Fire. But he was also there as a member of the union of Orthodox scientists to conduct an experiment: he measured the temperature of the Holy Fire with a very accurate device that uses lasers.

I was near him during the experiment and had the chance to see it for myself, close up. As a Catholic, I admit I was sceptical. But the results were surprising. The temperature immediately after we received the fire from the Patriarch of Jerusalem and All Palestine (around 2:34 pm Jerusalem time on Saturday, April 30) was 42°C, but 15 minutes later, at 2:49 pm, it was 320°C.

For Fr Gennady, these results offer a clear scientific argument for the existence of Divine energy in the flame, emanating from God.

A delegation from the St Andrew foundation, led by Vladimir Yakunin, took the Holy Fire from Jerusalem to Moscow, for the Easter service at the Christ the Saviour Cathedral.

The flame’s journey encompasses dozens of Russian cities, as it will share its light, the light of God’s grace, with believers across the country – from Sevastopol to Yakutsk, in addition to other Orthodox churches abroad.

The question of the authenticity of the miracle

“As with any other miracle there are people who believe it is a fraud and nothing but a masterpiece of Orthodox propaganda. They believe the Patriarch has a lighter inside of the tomb. These critics, however, are confronted with a number of problems. Matches and other means of ignition are recent inventions. Only a few hundred years ago lighting a fire was an undertaking that lasted much longer than the few minutes during which the Patriarch is inside the tomb. One then could perhaps say, he had an oil lamp burning inside, from which he kindled the candles, but the local authorities confirmed that they had checked the tomb and found no light inside it.

The best arguments against a fraud, however, are not the testimonies of the shifting Patriarchs. The biggest challenges confronting the critics are the thousands of independent testimonies by pilgrims whose candles were lit spontaneously in front of their eyes without any possible explanation. According to our investigations, it has never been possible to film any of the candles or oil lamps igniting by themselves. However, I am in the possession of a video filmed by a young engineer from Bethlehem, Souhel Nabdiel. Mr. Nabdiel has been present at the ceremony of the Holy Fire since his early childhood. In 1996 he was asked to film the ceremony from the balcony of the dome of the Church. Present with him on the balcony were a nun and four other believers. The nun stood at the right hand of Nabdiel. On the video one can see how he films down on the crowds. At a certain point all lights are turned off – it is time for the Patriarch to enter the tomb and receive the Holy Fire. While he is still inside the tomb one suddenly hears a scream of surprise and wonder originating from the nun standing next to Nabdiel. The camera begins to shake, as one hears the excited voices of the other people present on the balcony. The camera now turns to the right, whereby it is possible to contemplate the cause of the commotion. A big candle, held in the hand of the Russian nun, takes fire in front of all the people present before the patriarch comes out of the tomb. She holds the candle with shaking hands while making the sign of the Cross over and over again in awe of the miracle she has witnessed. This video appears to be the closest one gets to an actual filming of the miracle.”