Christ, you walked on the sea 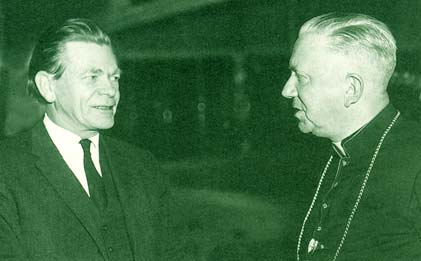 James McAuley, Professor of English at the University of Tasmania (1961-76) with Sir James Freeman, Cardinal Archbishop of Sydney (1971-83)

The recently posted article on CP&S  Six Cultural Trends That Challenge The Modern Evangelizer, written by Monsignor Pope, for me was pretty scary. I wonder too how many of us thought that Mons. Pope had stolen all our best original ideas? Or am I unique in that conviction? Well, it seems often to happen to me, I’m not sure why.

Meanwhile Professor James Phillip McAuley (1917-76) was an Australian poet. He was a founder in 1956 of the literary and cultural journal, Quadrant, and its chief editor until 1963. It is still running, as johnhenry, a subscriber, could tell us. McAuley also played the piano, pipe organ and virginal.

Dame Leonie Kramer, longtime professor of Australian Literature at Sydney University, said in her obituary for Professor McAuley that . . . at the centre of his intellectual interests was the large and complex set of problems related to the erosion of traditions, customs and beliefs in the modern world. She adds that . . . he was driven to search for the right word and the right phonetic structure in his poetry and the results were a number of the finest poems ever written in Australia. Dame Leonie edited all of McAuley’s works after his death and published them in 1988.

Two days ago on CP&S we enjoyed very much reading of all the sometimes shiver-inducing “cultural impediments” to evangelisation and faith in the West today. That would have been right up Professor McAuley’s alley as the following poem attests. In fact, it was his alley, mostly. There is much affinity in these few verses between Monsignor Pope’s most accurate observations about the modern West and the Professor’s own deep disappointments and concerns about same. I suggest so anyhow, as we can now see:

In the twentieth century

Christ, you walked on the sea

But cannot walk in a poem,

Not in our century.

Either with us or with you.

Our bright loud world is strong:

And better in some ways

Than the old haunting kingdoms:

I don’t reject our days.

But in you I taste bread,

Freshness, the honey of being,

And rising from the dead:

And water from a well.

Moving on a screen.

Our loves are processes

Our speech is chemical waste;

The words have a plastic feel,

And yet we dream of song

To find the living voice

That flesh once understood.

13 Responses to Christ, you walked on the sea