Vatican doctrinal chief: it’s not my job to engage in the dubia controversy 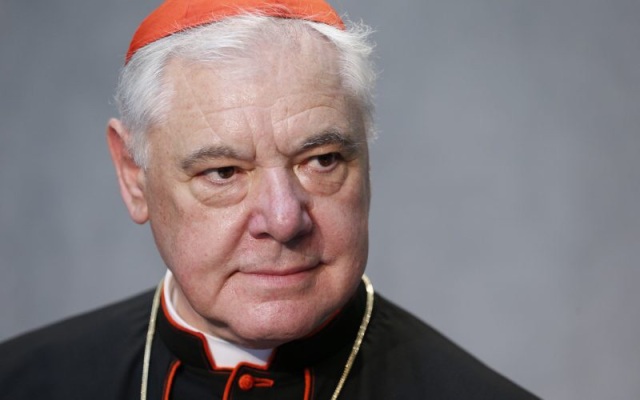 Cardinal Gerhard Müller, prefect of the Congregation for the Doctrine of the Faith (CNS)

by Staff Reporter at The Catholic Herald, posted Friday, 2 Dec 2016

Cardinal Gerhard Müller, the head of the Congregation for the Doctrine of the Faith (CDF), has said that his role is not to participate in the controversy over the four cardinals’ letter to the Pope.

He has also indicated that he does not believe Church doctrine can change on Communion for the remarried.

In an interview with the German website Kathpress, Cardinal Müller said that the CDF’s role was to speak with the authority of the Pope, not to “participate in the controversy of opinion”.

He was answering a question about the dubia – that is, requests for clarification submitted to the Pope by four cardinals. They ask whether certain teachings of the Church, repeated in the last 35 years by Pope St John Paul II, are still valid. The Pope has not replied to the dubia since they were submitted in September.

It is common for the Pope to ask the CDF to answer such a request. Cardinal Müller said the Pope could do so in this case.

In the interview, Cardinal Müller said that the CDF’s 1994 letter to bishops was still Church teaching, and that Pope Francis’s recent document, Amoris Laetitia, had not altered anything in this regard.

The 1994 letter repeated the teaching of St John Paul’s 1981 exhortation Familiaris Consortio, which says that the remarried can only receive absolution, and therefore Communion, if they resolve to live “as brother and sister”.

The letter, which was signed by the then-CDF head Cardinal Joseph Ratzinger and officially approved by St John Paul, says that the teaching of Familiaris Consortio applies without exception: “The structure of the Exhortation and the tenor of its words give clearly to understand that this practice, which is presented as binding, cannot be modified because of different situations.”

In the wake of Amoris Laetitia, some bishops have suggested that the Church’s doctrine on divorce, remarriage and Communion might admit exceptions. Bishop Robert McElroy of San Diego has issued guidelines which say “the conscience of the discerner” should decide whether to receive Communion.

The 1994 letter, however, says that the decision should be taken in obedience to the Church’s teaching, which conscience cannot override. It states: “The mistaken conviction of a divorced and remarried person that he may receive Holy Communion normally presupposes that personal conscience is considered in the final analysis to be able, on the basis of one’s own convictions, to come to a decision about the existence or absence of a previous marriage and the value of the new union. However, such a position is inadmissible.”

Cardinal Müller also downplayed the controversy over the dubia, saying that it was wrong to think of a power struggle: emphasis should be on “the victory of truth and not the triumph of power”, the cardinal said.

CP&S comment – Is this a form of hand-washing by Cardinal Müller of the sticky problem of the unanswered dubia? Or is it a strategic move from a true Cardinal of the Church not wanting to take on the responsibility for a Pope who could be trying to veer from the Catholic Faith’s dogmatic teaching?

LifeSiteNews has also reported on this

18 Responses to Vatican doctrinal chief: it’s not my job to engage in the dubia controversy