Reflections for the Third Sunday of Lent. (N.O. and E.F.) 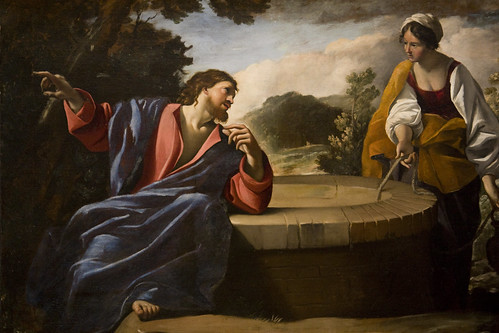 In order to grasp the meaning of today’s first reading from Exodus 17:3-7, we must recall what transpires in the preceding chapter. God’s little flock faced the hardship of a lack of food and protested to Moses. Just as the Lord had heard the cry of the people suffering the oppression of slavery (Exodus 3:7), God now hears their cry of starvation and provides them with nourishment in the form of manna and quail. While their lack of food had been stated in chapter 16, today’s passage confronts them with a new and dire challenge: the lack of drinkable water.

In 17:1, the narrator states this simple fact as a preface to the people’s quarrel with Moses. Perhaps taking a cue from the previous experience, Moses interprets their quarrel with him as a direct charge against God (17:2). He makes a similar move in Exodus 16:8: “What are we? Your complaining is not against us but against the LORD.” While Moses’ response centres on the conflict, God’s reaction delivers compassion. The God of Israel never condemns the grumbling Hebrews but simply instructs Moses to gather the elders, take them to a rock at Horeb, and strike it with the staff Moses had used to perform so many other miracles in Egypt. God grants Moses the reassurance of the Divine Presence: “I will be standing there in front of you” (17:6). In giving manna, bread from heaven, earlier, and now water (from an earthly rock), God provides for his people and shows his mastery over creation.

The two names Massah and Meribah become synonymous with the testing of Israel’s God, “You shall not put the LORD to the test, as you tested him at Massah” (Deuteronomy 6:16; Psalm 81:7). When the people put God to the test it suggests that they need to see God’s presence with them in a tangible fashion. The people’s action in testing God is interpreted in 17:7b as their lack of belief that God is with them. As soon as it gets difficult, the people’s immediate response is to doubt the presence of God.

The theme of thirsting and water continues in today’s fascinating and evocative Gospel story of the woman of Samaria and her encounter with Jesus at high noon (John 4:5-42)! The Samaritan woman is the most carefully and intensely catechized person in John’s Gospel. Today’s story is fraught with many moments of irony and several things are wrong with the whole scene at Jacob’s well deep in the heart of Samaria. First of all, the well is a public space common to both men and women, but they ought not to be there at the same time. Why does this woman come to the well at noon? Likely because the women of her village shun her for her shameless behaviour. She has had five husbands and is now living with someone other than her husband (4:16-18). It sounds like a contemporary Hollywood epic!

For a man to speak to an unchaperoned woman in a public place is very suspicious. Jews regarded Samaritan women as ritually impure, and therefore Jews were forbidden to drink from any vessel the women had handled. The disciples are utterly shocked (once again) at Jesus’ behaviour.

The startled woman asked Jesus if he thought he was greater “than our ancestor Jacob, who gave us this well and drank from it with his sons and flocks” (4:12). The comic relief of the story comes to an abrupt end with Jesus’ second command, “Go, call your husband” (4:16). In the course of the dialogue with the Samaritan woman Jesus reveals that he is indeed greater than the patriarch Jacob in that he, Jesus, inaugurates a new covenant, a new cult, and a new revelation.

When Jesus offers the woman “living water,” she replies that he doesn’t even have a bucket to draw with. The woman thinks of “flowing water,” so much more desirable than stagnant cistern water. But when she hears of the water welling up to eternal life, she understands enough to say, “Sir, give me this water…” (4:15). It is the water of life, i.e., the revelation that Jesus brings. The woman is invited by Jesus to see at a whole new level: there is water, and then there is living water; bread, and the food which is God’s will; Jacob, and Jesus; the promised Messiah, and Jesus; notions about worship, and genuine worship; and the list goes on and on. Jesus’ worship “in Spirit and truth” (4:23) is not a reference to an interior worship within one’s own spirit. The Spirit is the spirit given by God that reveals truth and enables one to worship God appropriately (14:16-17).

The woman, to whom Jesus revealed the truth in her life, left her water jugs behind and went into town to get people to come and see Jesus: “Come, look! Here is a man who told me everything that I’ve done. Is he not, maybe, the Messiah?” (4:29) Wouldn’t it also make sense for us who have experienced faith to drop, now and then, whatever we are doing in order to persuade others to come to HIM, the Source?

Who are the Samaritan women today?

Allow me to take the story of the Samaritan woman and apply it to some concrete situations today. In today’s provocative Gospel, Jesus transcends cultural barriers to reach out to the unnamed Samaritan woman as an equal. Women like her are marginalized in many patriarchal societies. Women like her still do the most backbreaking task of fetching water for their families and their animals. We see their images so often on the news, in pictures and images that cry out to us from the Third World. These women are responsible for hard domestic work.

In a way, the woman’s request for living water in today’s Gospel story can also be symbolically interpreted as an expression of her thirst, dryness, and emptiness longing to be filled. The Samaritan’s deep conversation with Jesus transforms her life totally. At the end, she leaves her jar – the emptiness, dryness, thirst – and goes to the people from whom she is hiding. She shares with them her liberating encounter with Jesus the Messiah. As a marginalized and perhaps excluded person, she thirsts for inclusion, and acceptance. She found in Jesus acceptance, and her true meaning and dignity for which she has searched so long!

Today, there are many “Samaritan women” in various forms longing to be liberated from life’s burden. They thirst for understanding and acceptance of who they are in society. We need only think of victims of human trafficking, especially women and girls, who need people like Jesus to listen to them, speak for them, and decriminalize them. Many people look on them as criminals, social outcasts, marginalized because they become illegal migrants in search of good jobs abroad in order to support their poor families. What are the terrible situations at home that compel them to go wandering? What are the sacrifices they are making for their loved ones? We need to help them reclaim their God-given dignity.

Today’s story of the woman of Samaria is a metaphor for our own lives – often lived in deserts of alienation, sinfulness, and despair. During the season of Lent in particular, we long for the refreshing waters of repentance, forgiveness, and wholeness. To repent is to acknowledge our own need for life in the midst of the desert, our need for breaking down the barriers that exist among us, our need for finding the living water that will truly quench our thirst. Lent invites us to join the woman of Samaria in today’s Gospel and the women of Samaria throughout the world and all those so desperately in need of life. May the Lord give us the courage to reach out to them, listen to them, feed them, and share with them the waters of life.

In his Lenten Message for 2011, Pope Emeritus Benedict wrote:

The question that Jesus puts to the Samaritan woman: “Give me a drink” (Jn 4: 7), […] expresses the passion of God for every man and woman, and wishes to awaken in our hearts the desire for the gift of “a spring of water within, welling up for eternal life” (Jn 4:14): this is the gift of the Holy Spirit, who transforms Christians into “true worshipers,” capable of praying to the Father “in spirit and truth” (Jn 4:23). Only this water can extinguish our thirst for goodness, truth and beauty! Only this water, given to us by the Son, can irrigate the deserts of our restless and unsatisfied soul, until it “finds rest in God,” as per the famous words of St. Augustine.

My eyes are ever towards the Lord: for he shall pluck my feet out of the snare: look Thou upon me, and have mercy on me; for I am alone and poor.  Ps: To Thee, O Lord, have I lifted up my soul: in Thee O my God, I have put my trust, let me not be ashamed.

The Mass of this Sunday shows us Jesus at grips with Satan. He overcomes him and drives him from the body of one possessed (Gospel).  From the beginning of His ministry Jesus was pitted against Satan; at the time of His passion He entered on the final combat but victory was assured to Him: “For the prince of this world cometh, and in me he hath not anything.”  Our Blessed Lord Himself summed up His whole work as the definitive victory over Satan: “Now shall the prince of this world be cast out. And I, if I be lifted up from the earth, will draw all things to Myself”.

Thus Our Blessed Lords’s whole mission is set before us as a struggle with, and a victory over Satan.  During Lent Holy Mother Church could not fail to emphasize this. At the outset, on the First Sunday, she appointed for the Gospel the account of the temptation in the desert and we have already seen its significance. Today, cast out of the body of one possessed, Satan finds that he has lost all of the kingdom he had seized. As the Passion and the baptisms of Easter draw nearer it is made clear to us that after the exorcisms have been pronounced over the catechumens will come the taking possession by Christ over the human souls He has redeemed.

The struggle against Satan goes on in our lives as baptised members of Holy Mother Church. Humanity, so long as it knew not Christ, was deaf and dumb to the devil’s prey; but once open to the light of our Saviour it can fix its gaze on Him and strong in His grace, begins in new ways, far from the darkness of sin.

1 Response to Reflections for the Third Sunday of Lent. (N.O. and E.F.)