Priest and churchgoers taken hostage by Islamic extremists in Philippines

We bring to your notice this report from Associated Press and published on the Catholic Herald, describing the disturbing situation in the Philippines. Please pray for the prompt release of the Catholic priest and churchgoers who were taken hostage by Islamic terrorists, and that the army is able to resolve the situation soon. 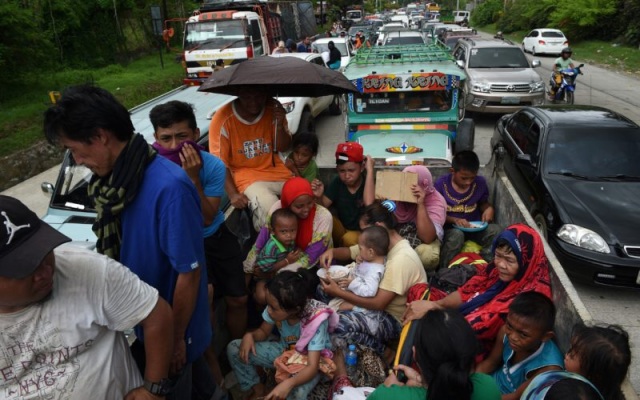 Muslim extremists abducted a Catholic priest and more than a dozen churchgoers while laying siege to a southern Philippine city overnight, burning buildings, ambushing soldiers and hoisting ISIS flags, officials said on Wednesday. President Rodrigo Duterte has declared martial law in the southern third of the nation and warned he would enforce it harshly.

The violence erupted on Tuesday night after the army raided the hideout of Isnilon Hapilon, an Abu Sayyaf commander who is on Washington’s list of most-wanted terrorists with a reward of up to $5 million for his capture. The militants called for reinforcements from an allied group, the Maute, and some 50 gunmen managed to enter the city of Marawi.

Archbishop Socrates Villegas, president of the Catholic Bishops Conference of the Philippines, said the militants forced their way into a cathedral in Marawi and seized a priest, 10 worshippers and three church workers.

The priest, Fr Chito, and the others had no role in the conflict, Archbishop Villegas said.

“He was not a combatant. He was not bearing arms. He was a threat to none,” Archbishop Villegas said of Chito. “His capture and that of his companions violates every norm of civilized conflict.”

The archbishop said the gunmen are demanding the government recall its forces.

Duterte declared martial rule for 60 days in the entire Mindanao region, the restive southern third of the Philippine archipelago. He had vowed to be “harsh.”

“I warned everybody not to force my hand into it,” Duterte said on a plane en route to the Philippines on Wednesday. “I have to do it to preserve the republic.”

A further report on the CH says that: “Thousands flee the city”, and that: “At least 21 people have died in fighting between the Philippines army and ISIS-linked militant groups”.

This attack is important in part because Our Lady help of Christians explained here https://en.wikipedia.org/wiki/Mary_Help_of_Christians represents a great Catholic victory against the Muslims at the battle of Lepanto.