Chief exorcist Father Amorth: Padre Pio said that the third secret of Fatima was about a “false church” in the end times 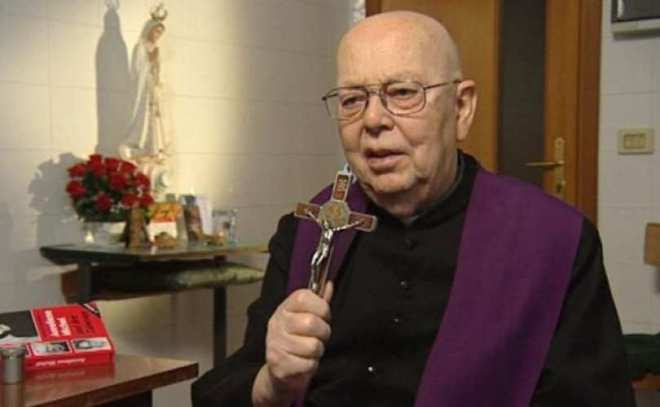 In a recent article on the “Secret of Fatima”, Steve Skojec, the founder and editor of OnePeterFive, published for the first time in the English language words from Rome’s chief exorcist, Father Gabriele Amorth (d. 2016), about Padre Pio and his knowledge of the Third Secret of Fatima. They come from a newly published book written by José María Zavala, entitled The Best Kept Secret of Fatima (El Sécreto Mejor Guardado de Fátima). Zavala interviewed Father Amorth in 2011, and was instructed to keep the interview secret until after the exorcist’s death.

In the interview, Fr. Amorth relates — as he has done elsewhere — that he does not believe the consecration of the world by Pope John Paul II in 1984 was sufficient to satisfy the requirements set forth by Our Lady.

“There was no such consecration then,” he [Father Amorth] says. “I witnessed the act. I was in St. Peter’s Square that Sunday afternoon, very close to the Pope; so close, I could almost touch him.”

Pressed by Zavala as to why he so forcefully believes that the consecration was not done, Fr. Amorth replied: “Very simple: John Paul II wanted to mention Russia expressly, but in the end he did not.”

Fr. Amorth said further: “I have no doubt that the consecration did not occur on the terms required by the Virgin. But we must not lose sight of what she herself wanted to tell us through Lucia: ‘In the end My Immaculate Heart will triumph.’”

Zavala then asked about the Third Secret:  “Forgive me for insisting on the Third Secret of Fatima: Did Padre Pio relate it, then, to the loss of faith within the Church?”

Fr. Gabriele furrows his brow and sticks out his chin. He seems very affected.

“Indeed,” he states, “One day Padre Pio said to me very sorrowfully: ‘You know, Gabriele? It is Satan who has been introduced into the bosom of the Church and within a very short time will come to rule a false Church.’”

“Oh my God! Some kind of Antichrist! When did he prophesy this to you?” I [Zavala] ask.

“Was that why John XXIII had such a panic about publishing the Third Secret of Fatima, so that the people wouldn’t think that he was the anti-pope or whatever it was …?”

A slight but knowing smile curls the lips of Father Amorth.

“Did Padre Pio say anything else to you about future catastrophes: earthquakes, floods, wars, epidemics, hunger …? Did he allude to the same plagues prophesied in the Holy Scriptures?” [asks Mr. Zavala]

“Nothing of the sort mattered to him, however terrifying they proved to be, except for the great apostasy within the Church. This was the issue that really tormented him and for which he prayed and offered a great part of his suffering, crucified out of love.” [says Fr. Amorth]

“The Third Secret of Fatima?”

“Is there any way to avoid something so terrible, Fr. Gabriele?”

“There is hope, but it’s useless if it’s not accompanied by works. Let us begin by consecrating Russia to the Immaculate Heart of Mary, let us recite the Holy Rosary, let us all do prayer and penance …”∎

70 Responses to Chief exorcist Father Amorth: Padre Pio said that the third secret of Fatima was about a “false church” in the end times