Reflection for the Feast of the Transfiguration of the Lord

From The Benedictine Monastery of Christ in the Desert (https://christdesert.org) by kind permission of the Abbot. 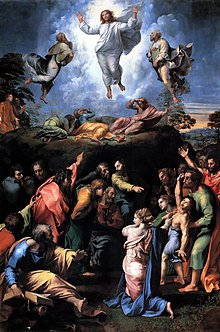 As I watched:  Thrones were set up and the Ancient One took his throne.  His clothing was bright as snow, and the hair on his head as white as wool; his throne was flames of fire, with wheels of burning fire.  A surging stream of fire flowed out from where he sat; thousands upon thousands were ministering to him, and myriads upon myriads attended him.  The court was convened and the books were opened.  As the visions during the night continued, I saw:  One like a Son of man coming, on the clouds of heaven; when he reached the Ancient One and was presented before him, the one like a Son of man received dominion, glory, and kingship; all peoples, nations, and languages serve him.  His dominion is an everlasting dominion that shall not be taken away, his kingship shall not be destroyed.

Beloved:  we did not follow cleverly devised myths when we made known to you the power and coming of our Lord Jesus Christ, but we had been eyewitnesses of his majesty.  For he received honor and glory from God the Father when that unique declaration came to him from the majestic glory, “This is my Son, my beloved, with whom I am well pleased.”  We ourselves heard this voice come from heaven while we were with him on the holy mountain.  Moreover, we possess the prophetic message that is altogether reliable.  You will do well to be attentive to it, as to a lamp shining in a dark place, until day dawns and the morning star rises in your hearts.

Jesus took Peter, James, and his brother, John, and led them up a high mountain by themselves.  And he was transfigured before them; his face shone like the sun and his clothes became white as light.  And behold, Moses and Elijah appeared to them, conversing with him.  Then Peter said to Jesus in reply, “Lord, it is good that we are here.  If you wish, I will make three tents here, one for you, one for Moses, and one for Elijah.”  While he was still speaking, behold, a bright cloud cast a shadow over them, then from the cloud came a voice that said, “This is my beloved Son, with whom I am well pleased; listen to him.”  When the disciples heard this, they fell prostrate and were very much afraid.  But Jesus came and touched them, saying, “Rise, and do not be afraid.”  And when the disciples raised their eyes, they saw no one else but Jesus alone.  As they were coming down from the mountain, Jesus charged them, “Do not tell the vision to anyone until the Son of Man has been raised from the dead.”

My sisters and brothers in Christ,

The first reading today comes from the Book of Daniel.  We are given a vision of heaven that is full of imagination and images and symbols.  Daniel is one of those who could see the Son of Man and know that a Savior was coming.  The Prophets in general were able to see that God’s love for His people would require a Savior to come.  What that would mean was not yet clear.  What was clear was the sinfulness of humanity and the love of the Father. Just as in the Transfiguration, we have the divinity of Jesus breaking through into our human situation, so also the Prophets could see that God must once again break into our human condition to draw us to Himself.

The second reading comes from the Second Letter of Peter and teaches us that the Transfiguration is given to us so that we can know the power and the majesty of the Lord Jesus.  The declaration from the Father, “This is my son,” is unique and helps all believe that truly, Jesus is God and has come to save us.

Today’s Gospel is from Saint Matthew.  We should note that the Transfiguration was experienced by Peter, James and John—not by the other Apostles or disciples or followers of Jesus—not even by Mary His Mother.  Peter will be placed by Jesus as the head of His followers.  James is the first to die for Jesus.  John is the disciple that Jesus loved.  Jesus does not always share with us his reasoning about why He does things and so we are invited to wonder—as surely did the other followers of Jesus.  And even though Jesus tells these three not to share the vision with anyone until He, Jesus, has been raised from the dead, surely the others were aware that something had happened.  We can try to imagine what answer these three would have given when the others asked:  what happened up there?

For us, the Transfiguration draws us deeper into the mystery of Jesus.  Our faith and the practice of our faith must rest on our belief that Jesus, fully human, is God.  God breaks through into our human history once more in Jesus Christ.  The Incarnation is not that God sent another Prophet or another Anointed one.  It is that, yes, but this Prophet, this Anointed One, is God Himself, present in our human condition, One like us in all things but sin.  God loves us!

Image: The Transfiguration of Our Lord by Raphael (1620)