A Priest Reveals the Dramatic Last Words of Cardinal Caffarra 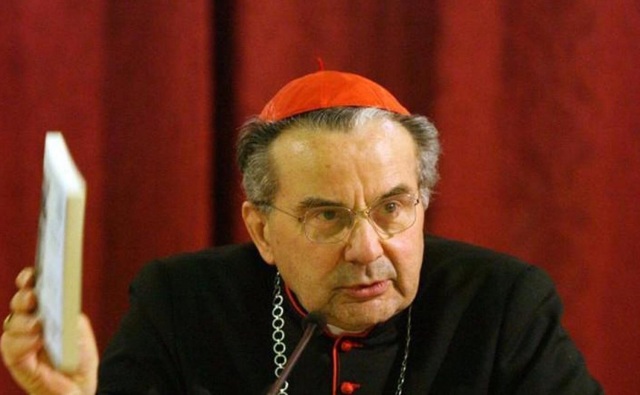 In recent years, many Catholics have looked to Cardinal Caffarra as one of the few lights in the present darkness.

A priest confided to me that in the past few days, he went to tell the Cardinal of his distress over the disasters that he endures in the Church every day, mentioning some incidents to him.

The cardinal burst into tears, saying:

“The Lord will not abandon His Church. There were twelve apostles, so the Lord will start again with a few. Imagine the suffering of Saint Athanasius, who was left alone to defend the truth for the love of Christ, of the Church and of men. We must have faith, hope and fortitude.”

The priest confided in me: “The cardinal was very sorrowful, but he conveyed to me so much courage and love for the Church.”

Caffarra’s reference to St. Athanasius refers to the darkest moment in Church history, when the Arian heretics took control of the Church in the fourth century.

Almost alone, Bishop Athanasius’ voice rose to the defense of Catholic truth. He was excommunicated by the pope and suffered exile four times.

But shortly thereafter, the Church returned to true faith and subsequently canonized Athanasius by proclaiming him Father and Doctor of the Church.

The priest that spoke with the cardinals repeated that he was very sorrowful. One might perhaps think that he died of a broken heart. Certainly in the secrecy of prayer, he had offered God his life for this poor, lost Christianity.

He was certain that in the world and in the Church, the Lord will win in the end. Thus, in recent years, he was found to be the protagonist of a powerful defense of the Catholic Faith and of the sacraments in the face of Pope Bergoglio’s Amoris Laetitia.

In this testimony, he was comforted by the prophetic words which he had received years ago from Sister Lucia of Fatima in a letter in which she wrote to him that “the final battle between God and Satan will be about marriage and the family”.

This story – in addition to revealing to everyone his wisdom, his faith, and his courage – also shed light on his deep humanity.

I have a personal memory of this. It was August 15, 2010, the feast of the Assumption. My daughter Catherine had just awoken from a coma and was admitted to the “House of Awakenings” in the Bolognese hills.

To our surprise, that day, we saw Cardinal Carlo Caffarra, Archbishop of Bologna, arrive in the intense heat, in his own humble and simple way.

He had come to see Catherine, whose plight he had followed, (we were in indirect contact) and he stayed with us the entire day.

He was dressed like a simple priest. He also went to greet everyone who was sick, as well as their relatives. A true man of God.

Up until then, I knew him as a very robust theologian, friend and collaborator of John Paul II and Benedict XVI who appreciated him so much.

But that day – in that place of pain and hope – I found him to be a true father. His humanity and his paternal wisdom struck me, and I found them all again in his last mission for the Church.