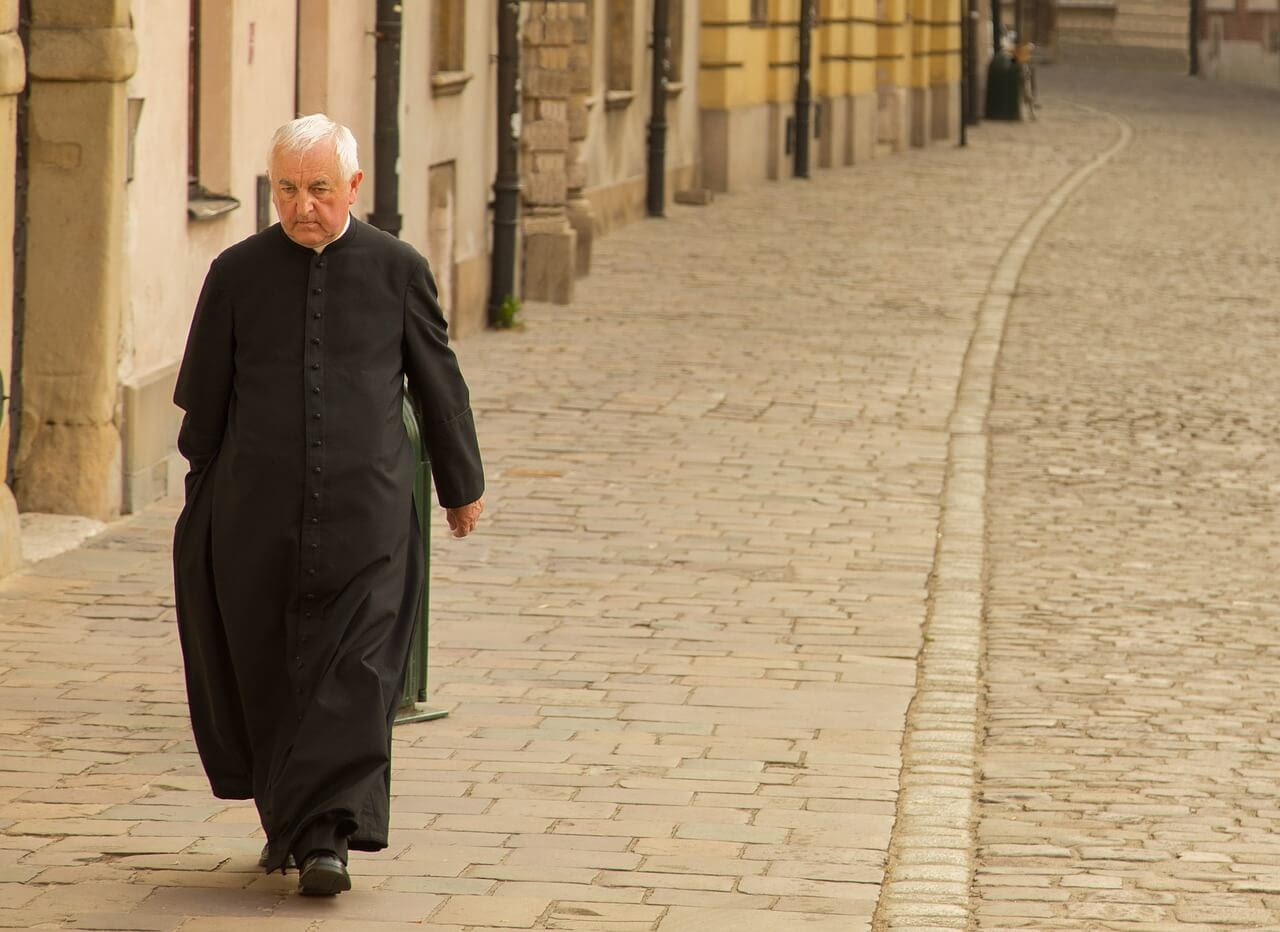 St. Thomas Aquinas wrote that servile fear is of the kind that a servant feels before his master — essentially, a fear of punishment. “Accordingly, ” St. Thomas writes, “if a man turn to God and adhere to Him, through fear of punishment, it will be servile fear; but if it be on account of fear of committing a fault, it will be filial fear, for it becomes a child to fear offending its father.” Elsewhere, servile fear is defined as “Selfish fear based on dread of pain to oneself that would follow if another were offended. It is the fear of punishment for wrongdoing, without being motivated by honor or a sense of duty, and least of all by love.” While servile fear “may co-exist with filial fear,” — and indeed, St. Thomas argues that “servile fear is from the Holy Ghost” — it is to be remembered that “purely servile fear, with no love of God but only self-love that fears the divine punishments, is at least in theory, inconsistent with the true love of God.”

In practical terms, servile fear is that fear which is primarily motivated by self-love. It seeks to avoid the loss of some good or goods, position, or status, or even the loss of Heaven out of the love of self — not the love of God.

It is of this species of fear to which many Catholic faithful, exasperated by the failure of leadership they perceive among their priests and bishops, accuse the clergy of falling prey. However, one thing is often overlooked when people discuss “fearful” shepherds — especially when they are quick to call them cowards — is that their first duty — after Loving God above all things and obeying Him no matter the consequences to themselves — is to love their neighbor as themselves, by forming, nourishing, and protecting the spiritual children of their particular flock.

One of the things I have spent much time on as a pastor is giving council to parents over their legitimate fears for their children (and their fears are legion.) Every good pastor has many of the same fears for his spiritual children that biological parents have for their children, and the primary fear is that they will be led astray.

There are, consequently, many pastors who may not speak out publicly in such a way that they are openly challenging the problems in the Universal Church, but this does not mean that they are not speaking out in their parishes — from their pulpits, in the confessional, or in the spiritual counsel they give to the members of their flock. They try to nourish and guide the souls entrusted to their care according to the fullness of the Catholic Faith even when their own bishops — or even the pope himself — are not, and they do so as a direct response to what those bishops and the pope are doing and saying.

They do this in order to keep their spiritual children safe from spiritual harm. And many of them have a legitimate concern that if they raised their voices in protest outside the parish walls, they might well be removed in retribution. The question that haunts them is, “If such a thing were to happen, who would be sent to replace me?” They know that the wolves and hirelings far outnumber the faithful shepherds and that if they are removed for speaking the truth to the whole world, those who would likely take their places would be chosen because they will not speak the truth to the parish, let alone to the world.

It is for this reason — a concern for what will become of their spiritual children — that many pastors of souls remain silent in the ‘press’, while they are anything but silent from the pulpit, the classroom, or the tables of the parishioners who invite them into their homes.

When I reflect on the fears that I have about being removed, excommunicated, or laicized for speaking the truth, I cannot deny that the questions of, “What shall I do? How will I live?”, arise in my mind. These are natural fears, but they are not the most pressing; these are the “servile fears”, and they are usually immediately quelled upon recourse to prayer and an act of spiritual abandonment to God. The fear that isn’t quelled so easily, is: when I am gone, what shall happen to my spiritual children?

Just recently I had several parishioners, at different times, express to me how they hoped that I would be able to stay here past the time of my current assignment because they have grown in their faith and know the wasteland that surrounds them in the various parishes in my small deanery. Their concerns were not because they thought I might be removed for speaking the truth, even though I have told the parishes I serve that this is a real possibility (I have spoken the hard truth several times at diocesan meetings with the bishop, and even with members of the laity present.) They were simply aware that even in the normal course of events, a pastor who gives bread instead of stones has become a rarity.

A priest — especially a parish priest, and most especially a pastor — is, as his title aptly suggests, a father. Thus, his natural place is in his home with his spiritual family. This is why the post-conciliar practice of shuffling the pastoral deck every few years is often so destructive to parish life. What would we say about a natural family that got a ‘new’ father every six or twelve years? Why is it considered a tragedy when an orphan is moved from foster home to foster home? This constant change in the paternal relationship is often a recipe for disaster that often begets chaos and ruin. I have expressed this concern to my bishop, and requested to be allowed to remain in my little parishes until I die, because they are my family and I am a father to them. That is not to say that tending to my spiritual family is always a picnic! Even so, I love them and desire to remain with them so that I can lead as many of them to Eternal Salvation as is possible by the Grace of God.

I have been in my assignment for several years and from the beginning had a parishioner who attacked my character and made life difficult. I prayed for him often and even rebuked him publicly and warned him of hell. After almost eight years he came to me and repented, and I absolved him and he died in a state of grace. Being a priest is the greatest blessing there is, and being separated from one’s flock, even the difficult ones, is the greatest suffering there is for a priest. This is what many of them fear because they know Hell is real and that many of their children will end there if they are not constantly guided and nourished with the Saving Truth of Jesus Christ.

What I always tell parents is what I must hear myself: God is in charge and if your children refuse your good council you must continue to pray, fast and do penance for them to merit actual graces for them so that they may repent and be saved. The vast majority of Faithful Catholics are so, because of Faithful Parents: naturally and spiritually. The fact that there are Faithful Catholics is due to the fact that there are Faithful Shepherds who taught them and nourished them with the Holy Catholic Faith, and much of that was face to face in a parish setting or at a conference or a retreat — in other words, through personal encounters, not through strongly worded essays in the paper or online. There is much to be gained through the Catholic Internet, but the people of God need shepherds of flesh and blood who will feed them the True Faith in their parishes, or they will perish.

It is my plea to you, therefore, that you resist rash judgment when it comes to the priests whom you wish would break their silence and shout the truth about the emperor’s wardrobe malfunction from the rooftops. Do not assume that their public reticence equals cowardice or consent. Please pray for the good shepherds that even now work amongst the Lord’s sheep. Pray that they are not inhibited by servile fear, and that that they will be governed instead by the Fear of the Lord and His Love above all things, but also remember that this does not necessarily mean that all of them need to preach to the whole world via the internet or the media. If, however, that is what God is calling them to, pray that they are able to discern it, and do so with Holy Boldness.

When the time comes for the majority of the good shepherds to be driven into exile — and that time seems to have already begun in some quarters — they will need to be supported by you, the faithful laity. They will need you to take them into your homes, to be succored and sheltered. They will need help with their debts and obligations, as many of them are too old or limited to be truly gainfully employed elsewhere. And they need to hear from you, the faithful laity, those face to face reassurances that, should the day come, you will support in this manner. Without such support, then the message being sent to these priests by the laity who most ardently desire their boldness is that they must go to Calvary alone.

Even Jesus went to Calvary with a faithful few who accompanied Him and remained with Him in His Holy Agony.

It seems to me that the Church at this time finds herself mystically within the following verses of Revelation (12:13-17):

So when the dragon saw that he had been thrown down to the earth, he pursued the woman who had given birth to the male child. But the woman was given the two wings of the great eagle, so that she could fly from the serpent into the wilderness, to her place where she is nourished for a time, and times, and half a time. Then from his mouth the serpent poured water like a river after the woman, to sweep her away with the flood. But the earth came to the help of the woman; it opened its mouth and swallowed the river that the dragon had poured from his mouth. Then the dragon was angry with the woman, and went off to make war on the rest of her children, those who keep the commandments of God and hold the testimony of Jesus.

The woman, of course, is Mary. But Mary is also the archetype of Holy Mother Church, who has been and is being persecuted by the dragon, who will make war upon the faithful until Our Lord Jesus Christ comes again in glory.

2 Responses to On Pastoral Fear