A Long Lent Commenced on the First Sunday of Advent, 1969

On November 30, 1969, the first Sunday of Advent, the Novus Ordo Missae took effect, and what is now known as the “Extraordinary Rite” was effectively abolished. The floodgates of mediocrity and stupidity flew open…
Or maybe it would be more accurate to say that the mediocrity and stupidity were merely unmasked.
Dr. Alice von Hildebrand, the wife of the 20th-century theologian Dietrich von Hildebrand, traces the historical roots of the crisis of the last 40 years:

“I relate in my biography of my husband, The Soul of a Lion, that a few years after his conversion to Catholicism in the 1920s, he began teaching at the University of Munich. Munich was a Catholic city. Most Catholics at the time went to Mass, but he always said that it was there that he became aware of the loss of a sense of the supernatural among Catholics. One incident especially offered him sufficient proof, and it greatly saddened him.

When passing through a door, my husband would always give precedence to those of his students who were priests. One day, one of his colleagues (a Catholic) expressed his astonishment and disapproval: “Why do you let your students step ahead of you?” “Because they are priests,” replied my husband. “But they do not have a Ph.D.” My husband was grieved. To value a Ph.D. is a natural response; to feel awe for the sublimity of the priesthood is a supernatural response. The professor’s attitude proved that his sense for the supernatural had been eroded. That was long before Vatican II. But until the Council, the beauty and the sacredness of the Tridentine liturgy masked this phenomenon.
…
…[My husband] believed that after Pius X’s condemnation of the heresy of Modernism, its proponents merely went underground. He would say that they then took a much more subtle and practical approach. They spread doubt simply by raising questions about the great supernatural interventions throughout salvation history, such as the Virgin Birth and Our Lady’s perpetual virginity, as well as the Resurrection, and the Holy Eucharist. They knew that once faith – the foundation – totters, the liturgy and the moral teachings of the Church would follow suit. My husband entitled one of his books The Devastated Vineyard. After Vatican II, a tornado seemed to have hit the Church.

Modernism itself was the fruit of the calamity of the Renaissance and the Protestant Revolt, and it took a long historical process to unfold. If you were to ask a typical Catholic in the Middle Ages to name a hero or heroine, he would answer with the name of a saint. The Renaissance began to change that. Instead of a saint, people would think of geniuses as persons to emulate, and with the oncoming of the industrial age, they would answer with the name of a great scientist. Today, they would answer with a sports figure or cinema personality. In other words, the loss of the sense of the supernatural has brought an inversion of the hierarchy of values.

Even the pagan Plato was open to a sense of the supernatural. He spoke of the weakness, frailty and cowardice often evidenced in human nature. He was asked by a critic to explain why he had such a low opinion of humanity. He replied that he was not denigrating man, only comparing him to God.

With the loss of a sense of the supernatural, there is a loss of the sense of a need for sacrifice today. The closer one comes to God, the greater should be one’s sense of sinfulness. The further one gets from God, as today, the more we hear the philosophy of the new age: “I’m OK, You’re OK.” This loss of the inclination to sacrifice has led to the obscuring of the Church’s redemptive mission. Where the Cross is downplayed, our need for redemption is given hardly a thought.

The aversion to sacrifice and redemption has assisted the secularisation of the Church from within. We have been hearing for many years from priests and bishops about the need for the Church to adapt herself to the world. Great popes like St. Pius X said just the opposite: the world must adapt itself to the Church.”

The interview concludes with the following summation:

“The devil hates the ancient Mass. He hates it because it is the most perfect reformulation of all the teachings of the Church. It was my husband who gave me this insight about the Mass. The problem that ushered in the present crisis was not the traditional Mass. The problem was that priests who offered it had already lost the sense of the supernatural and the transcendent. They rushed through the prayers, they mumbled and didn’t enunciate them. That is a sign that they had brought to the Mass their growing secularism. The ancient Mass does not abide irreverence, and that was why so many priests were just as happy to see it go.”

And so the ancient Mass went — but only temporarily. It is worth noting that, for all the anguish that the sudden shelving of the old rites caused, these rites have at least come down to us intact: if the Ordo Missae of 1962 was out of the reach of the faithful, it was also out of the reach of modernist tinkerers who have had a field day with the new Ordo.
Viewed in this light, the introduction of the Novus Ordo Missae and its constellation of latent follies was not the source of the crisis of the last four decades, but — thanks to the divine Providence that works all things to our good — its remedy. Because God is ultimately in charge, and not Archbishop Bugnini or any other infiltrators in the Church, the Novus Ordo was always bound to be an instrument of good, for all the damage that has been wreaked on its account. It has destroyed our illusions about our spiritual health. It has torn the veneer of holiness off the rot and the maggots and put them in our collective face.

A bitter cure, to be sure, but that is often the nature of a cure. A boil, after all, has to be lanced and drained. The process is painful and disgusting, but necessary.

And there is healing at the end of it. 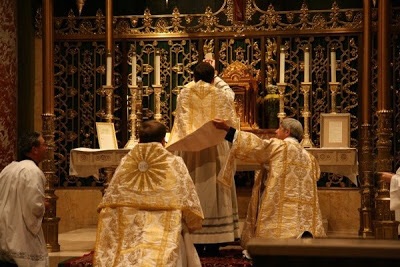 9 Responses to A Long Lent Commenced on the First Sunday of Advent, 1969