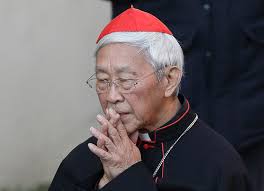 Taiwan News reported how, last Wednesday, Hong Kong’s 86-year-old Cardinal emeritus Joseph Zen (陳日君) appeared in Saint Peter’s Square, lined up in the cold with other petitioners, seeking to deliver a letter directly into the hands of Pope Francis. He was coming to deliver a letter from the “underground” Catholic congregation in China, so that the pope would better understand why they oppose submitting to the Communist regime. It was all in vain. See below this troubling article on 1Peter5 giving the latest information.

A new statement from the Holy See Press Office today indicates that despite assertions to the contrary from an outspoken Chinese cardinal, Pope Francis is fully aware and approves of recent diplomatic steps taken by the Vatican to appease the Chinese government.

Yesterday, we reported that Cardina Joseph Zen, bishop-emeritus of Hong Kong, had released a statement explaining recent events in Sino-Vatican relations from his own perspective — including his recent meeting with the pope on January 12th. Of that meeting, Cardinal Zen recounted:

[T]he conversation lasted about half an hour. I was rather disorderly in my talking, but I think I succeeded to convey to the Holy Father the worries of his faithful children in China.

The most important question I put to the Holy Father (which was also in the letter) was whether he had had time “to look into the matter” (as he promised Archbishop Savio Hon). In spite of the danger of being accused of breach of confidentiality, I decide to tell you what His Holiness said: “Yes, I told them (his collaborators in the Holy See) not to create another Mindszenty case”! I was there in the presence of the Holy Father representing my suffering brothers in China. His words should be rightly understood as of consolation and encouragement more for them than for me.

I think it was most meaningful and appropriate for the Holy Father to make this historical reference to Card. Josef Mindszenty, one of the heroes of our faith. (Card. Josef Mindszenty was the Archbishop of Budapest, Cardinal Primate of Hungary under Communist persecution. He suffered much in several years in prison. During the short-lived revolution of 1956, he was freed from prison by the insurgents and, before the Red Army crashed the revolution, took refuge in the American Embassy. Under the pressure of the Government he was ordered by the Holy See to leave his country and immediately a successor was named to the likings of the Communist Government).

With this revelation, I hope I have satisfied the legitimate “right to know” of the media and of my brothers in China.

In a clarifying note at the bottom of his statement, Zen re-iterated, however, that despite the “consolation and encouragement” he found in the pope’s words, the Vatican’s demand to replace certain legitimate Chinese bishops with government-appointed ones is a serious problem:

So, do I think that the Vatican is selling out the Catholic Church in China? Yes, definitely, if they go in the direction which is obvious from all what they are doing in recent years and months.

The impression of his overall assessment is that the compromises between the Vatican and Beijing — compromises Zen opposes — are the fault of Vatican diplomats, and not the pope.

Immediately after his statement began making the rounds, Crux, an American Catholic news outlet funded by the Knights of Columbus and seen by many as a virtual propaganda arm of the pope’s agenda of “reform,” ran a piece with the headline: “Cardinal Zen attacks Vatican efforts to rehabilitate government-appointed Chinese bishops“.

Such a bold headline — which almost instantly generated outrage from Catholics concerned for the plight of the faithful in China — was perhaps the first indication of how the Vatican viewed Zen’s statement.

Today’s statement from the Holy See was a less direct slap in the face of Cardinal Zen — but a slap nonetheless:

With reference to widespread news on a presumed difference of thought and action between the Holy Father and his collaborators in the Roman Curia on issues relating to China, I am able to state the following:

“The Pope is in constant contact with his collaborators, in particular in the Secretariat of State, on Chinese issues, and is informed by them faithfully and in detail on the situation of the Catholic Church in China and on the steps in the dialogue in progress between the Holy See and the People’s Republic of China, which he follows with special attention. It is therefore surprising and regrettable that the contrary is affirmed by people in the Church, thus fostering confusion and controversy”.

In other words, Don’t listen to the meddling old Chinese cardinal who is worried about his people who are simply trying to live their faith without communist interference. The pope is on board with the current Vatican Ostpolitik, and fully approves.