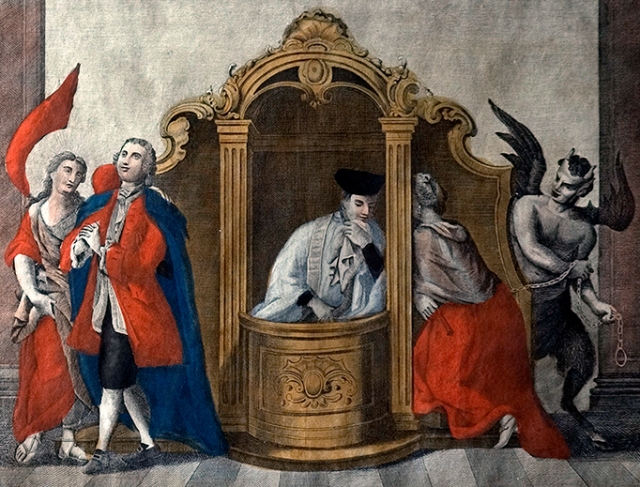 Before a man falls into sin, the devil labours to blind him that he may not see the evil he does and the ruin he brings upon himself by sinning against God. After the sin, the enemy seeks to make the sinner dumb, that through shame he may conceal his guilt in Confession. Oh, accursed shame! How many poor souls does it not send to hell! They think more of the shame than of salvation!

Set a door, O Lord, round about my lips. (Ps. cxl. 3). St. Augustine says that we should keep a door to the mouth that it may be closed against detraction and blasphemies, and all improper words, and that it may be opened to confess the sins we have committed. “Thus,” adds the holy Doctor, “it will be a door of restraint, and not of destruction.” To be silent when we are impelled to utter words injurious to God or to our neighbour, is an act of virtue; but to be silent in confessing our sins, is the ruin of the soul. After we have offended God, the devil labours to keep the mouth closed, and to prevent us from confessing our guilt. St. Antoninus relates that a holy solitary once saw the devil standing beside certain persons who wished to go to Confession. The solitary asked the fiend what he was doing there. The enemy said in reply: “I now restore to these penitents what I before took away from them. I took away from them shame while they were committing sin; I now restore it that they may have a horror of Confession.” My sores are putrefied and corrupted, because of my foolishness. (Ps. xxxvii. 6). Gangrenous sores are fatal; and sins concealed in Confession are spiritual ulcers which mortify and become gangrenous.

St. John Chrysostom says that God has made sin shameful that we may abstain from it, and He gives us confidence to confess it by promising pardon to all who accuse themselves of their sins. But the devil does the contrary: he gives confidence to sin by holding out hopes of pardon; but, when sin is committed, he inspires shame in order to prevent the confession of it.

To all who have sinned, I say, that you ought to be ashamed to offend so great and so good a God. But you have no reason to be ashamed of confessing the sins which you have committed. Was it shameful of St. Mary Magdalen to acknowledge publicly at the feet of Jesus Christ that she was a sinner? By her confession she became a Saint. Was it shameful in St. Augustine not only to confess his sins, but also to publish them in a book, that, for his confusion, they might be known to the whole world? Was it shameful in St. Mary of Egypt to confess that for so many years she had led a scandalous life? By their confessions these have become Saints, and are honoured on the Altars of the Church.

That man who acknowledges his guilt before a secular tribunal is condemned; but in the tribunal of Jesus Christ, they who confess their sins obtain pardon, and receive a crown of eternal glory. “After confession,” says St. John Chrysostom, “a crown is given to penitents.” He who is afflicted with an ulcer must, if he wish to be cured, show it to a physician: otherwise it will fester and bring on death. The Council of Trent says “that the physician cannot cure an evil of which he is ignorant.” If, then, your souls be ulcerated with sin, be not ashamed to confess it; otherwise you are lost. For thy soul be not ashamed to say the truth. (Ecclus. iv. 24). But, you say, I feel greatly ashamed to confess such a sin. If you wish to be saved, you must conquer that shame. For there is a shame that bringeth sin, and there is a shame that bringeth glory and grace. (Ecclus. iv. 25). According to these words there are two kinds of shame: one of which leads souls to sin, and that is the shame which makes them conceal their sins in Confession; the other is the confusion which a Christian feels in confessing his sins; and this confusion obtains for him the grace of God in this life, and the glory of Heaven in the next.

St. Augustine says that to prevent the sheep from seeking assistance by its cries, the wolf seizes it by the neck, and thus securely carries it away and devours it. The devil acts in a similar manner with the sheep of Jesus Christ. After having induced them to yield to sin, he seizes them by the throat that they may not confess their guilt; and thus he securely brings them to hell. For those who have sinned grievously, there is no means of salvation but the confession of their sins. But what hope of salvation can he have who goes to Confession and conceals his sins, and makes use of the tribunal of Penance to offend God, and to make himself doubly the slave of Satan? What hope would you entertain of the recovery of a man who, instead of taking the medicine prescribed by his physician, drank a cup of poison? O God! What can the Sacrament of Penance be to those who conceal their sins but a deadly poison which adds to their guilt the malice of sacrilege!

(Meditation for Third Sunday of Lent – by St Alphonsus Liguori)*

* We apologise for the late posting of today’s Lenten meditation.

6 Responses to Concealing Sins In Confession