Cultural Marxism in the World Today

The definition of CULTURAL MARXISM is given as:
The gradual process of destroying all traditions, languages, religions, individuality, government, family, law and order in order to re-assemble society in the future as a communist utopia. This utopia will have no notion of gender, traditions, morality, god or even family or the state. [Read More HERE]

It is an evil, ugly ideology that flies in stark contrast to Catholic teaching, and yet it has successfully penetrated the minds of countless millions today over the whole world, but in a very significant way in Western Nations. 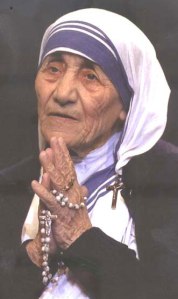 The beautiful face of Mother Teresa of Calcutta

We have all heard the saying: “the face is the mirror of the soul”.  A person who lives a life  full of love, generosity and kindness,, whose soul is pure and good, will possess an expression on their face that radiates the beauty of their soul. It has nothing to do with the person’s ethnic origin, age or the ‘perfect’ facial features and body dictated to the world by the superficial world of fashion. No: true beauty and goodness is in the soul, and this is transmitted outwards on a person’s countenance. (Think of the faces of the saints.)

On the other hand, a selfish, mean-spirited interior cannot be disguised outwardly by an evil-doer. They will reflect in their facial expression the ugliness of their soul. (Remember the Satanical look in the faces of Islamic jihadists, militant feminists, pro-choice demonstrators.)

Simply put: beauty is of God; ugliness is of the devil. Cultural Marxism in the world today is producing much ugliness. It has even infiltrated the Catholic Church.

The history of art and architecture in the Catholic Church also represents this contrast between beauty and ugliness. Although the Devil never sleeps, the magnificent and beautiful creations made when the Church was growing and flourishing came to an abrupt end after the Council once the Modernist ‘spirit’ of Vatican Two was let loose upon the Church. Hideous new churches were built under the pretense of Modernity; weird ‘religious’ paintings and sculptures were produced that often looked like anything other than the holy subjects they were supposed to represent; reverence at Mass disappeared; a banal Liturgy replaced the sublime Liturgy of the ancient Tridentine Mass; lovely pious devotions were abandoned – too beautiful for the progressives shapers of the Brave New World!

And with Ugliness entering as Cultural Marxism through those ‘open doors’ to the world, Beauty and Truth was all but kicked out. Thousands left the Church that they no longer recignised as Catholic, many of them harbouring broken hearts.

Hopes were raised in part during the strong dynamic Pontificate of Pope St John Paul II, and especially with the return of the holy Mass of the Ages under Pope Benedict XVI, that ugliness was finally on its way out. Under Pope Francis those hopes have been dashed to bits. Every part of the life of the Church is being threatened by the world, the flesh and the devil once more; although this time, and thanks to modern methods of communication, there is greater awareness of these dangers among the faithful.

On the ‘LES FEMMES’ blog the other day there was an article with a startling title:

Gucci Models Carry Their Own (Replicated) Severed Heads on Runway. “There’s nothing like Cultural Marxism to bring out ugliness and evil…” says the author.

In other words, Cultural Marxism bears the signature of the devil. This macabre fashion display is a perfect example. Many of the films being churned out by Hollywood these days are also a product of this growing Cultural Marxism. The films often exhibit a deep hatred of Catholicism.

But fashion displays and Hollywood form part of the secular world that has nothing to do with true beauty. True beauty comes from God Alone, and beautiful things in Nature draw us towards God Who created them. Devotional works in Christian art and literature are inspired by His grace.

The Catholic Church is Christ’s Holy Bride and must be a bulwark of shining beauty, teaching the fullness of the Faith at all times, and looking always heavenwards, caring only for the salvation of souls. This brings down the hatred and condemnation of the secular world upon us, but we must not be discouraged. Our Blessed Lord told us:

If we equate Cultural Marxism in the world with the devil, we know we should not fear if we are hated by its adherents. Progressive Catholics who deny the “hard truths” of the Faith in order to go along with the world are the ones who should be fearful! But no one can pretend it is easy to confront the establishment and its so-called ‘politically correct’ communist utopia. We must arm ourselves with all the virtues, notably much holy courage, and prayer and fasting.

For further information on the ways Cultural Marxism has infiltrated our way of life, watch THIS VIDEO from ‘Sensus Fidelium’.

10 Responses to Cultural Marxism in the World Today