HERE IS A PARTIAL TEXT OF THE NOW INFAMOUS LETTER

It is becoming increasingly obvious that Pope Francis’s spin doctors have rather spun this out of control, and instead of adding credence to AL it has highlighted the steps his friends will take to add legitimacy to what is, in parts, grossly heretical. 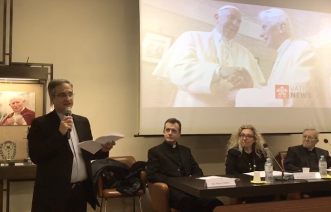 The press office of the Holy See has not released the complete text of the letter sent by Benedict XVI last February 7 to the prefect of the Secretariat for Communications, Monsignor Dario Edoardo Viganò.

Viganò has, however, given it a reading (see photo) on the occasion of the presentation to the press of the series “The theology of Pope Francis,” published by  Libreria Editrice Vaticana and made up of eleven booklets, by different authors, on various aspects of the written and oral magisterium of the current pontiff.

The letter bears the date of February 7 and is in response to a previous letter from Viganò of January 12. But given that it was made known on the evening of March 12, just before the fifth anniversary of the election…