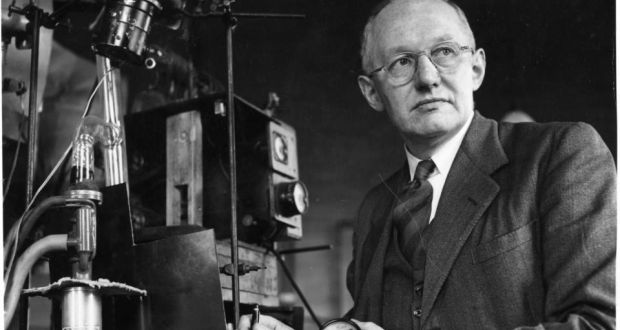 Ernest Walton (and John Cockcroft) were the first to split the atom in 1932. The rest is history. Ernest was born and raised in Dungarvan, the son of a minister.

I used to be a regular contributor here, of lightweight and humorous fluff pieces mostly, until mid 2015 when I took on some serious extra responsibilities in “meat-space” and had to take a sabbatical from this blog. Those burdens were not worth it: All I did was waste my talents, energy, and health in trying to achieve the impossible and evitable. Anyway, my membership as a CP&S author has not expired and so I have ventured back, as you can see.

For the last few years I have taken all my paid annual leave as a block to encompass Lent and Eastertide. I thought it might be wise to synchronise my holydays off from the profane world of paid employment, with THE Season of Grace. Let me tell you what: it works!!!

This year, after spending some time as a house-husband, supporting my wife for a change, I headed over to Ireland to attend to my grandmother’s old cottage which I inherited some years ago. Over that time, I evicted most of the spiders and woodlice, had it re-roofed and dry-lined etc. It is almost 20th century housing stock now. When funds arise, I shall really modernise it, with sensitivity I hope.

Last Sunday I went to Mass at the nearby Augustinian Friary in Dungarvan. Fr Seamus, who gave my father the last rites 12 years ago, was not presiding. Instead was the Provincial of the Irish Augustinians, his boss. His sermon started bleakly: all the friars of his Order are ageing and dying, friaries/parishes must be closed, decisions are difficult etc.

Instead of dictating a policy though, this wise and holy priest gave the members of the congregation five minutes in which to turn to their nearest neighbours and discuss why this parish should not be dissolved. As a visitor, I felt a bit awkward but took part. One other of my neighbours was also a visitor from the UK. In a speed-dating sort of way we all conflabbed and deduced that what made this particular parish great was its warmth as a community, its talented folk choir, and its long history as both. I contributed rather uselessly my observation that in recent years the liturgical abuses were much less, judging by UK standards. I got a lot of strange looks for that. I suppose it was like my attending the resuscitation of a seriously ill patient and remarking about the patient’s shoddy haircut.

Anyway, the Provincial gathered the consensus of the the people of God, by earwigging a lot I guess, and then the Mass continued as usual and I received my Transplant and Transfusion of Divine Grace, and then I returned to my usual life of moral confusion and sins-to-be-avoided, for another week. Next stop: Lunch with my long-lapsed older brother…..

[To be continued if any interest is shown…..]

7 Responses to Greetings From Dungarvan