The Shroud of Turin: Evidence for Easter

The Resurrection of Our Lord, Jesus Christ is the “miracle of miracles”. The Faith for the vast majority of Christians is based on the overwhelming testimony of the Apostles, and therefore the Shroud of Turin is no more than an object of special veneration that proves scientificially that which they already know to be true.  However, does the Shroud of Turin, once studied deeply and objectively, provide the material evidence for the sceptics of this fundamental truth on which Christianity is based? Is it God’s gift for the incredulous of the world? “Blessed are those who have not seen, but believe”, Jesus says to St Thomas. The Shroud of Turin has become the proof for many doubters who wish to “see” in order to “believe”. “Atheists often ask for evidence for the existence of God. I think the Shroud of Turin is the most convincing evidence available if they want scientific, archeological, historical, physical proof” – (Fr Dwight Longenecker). 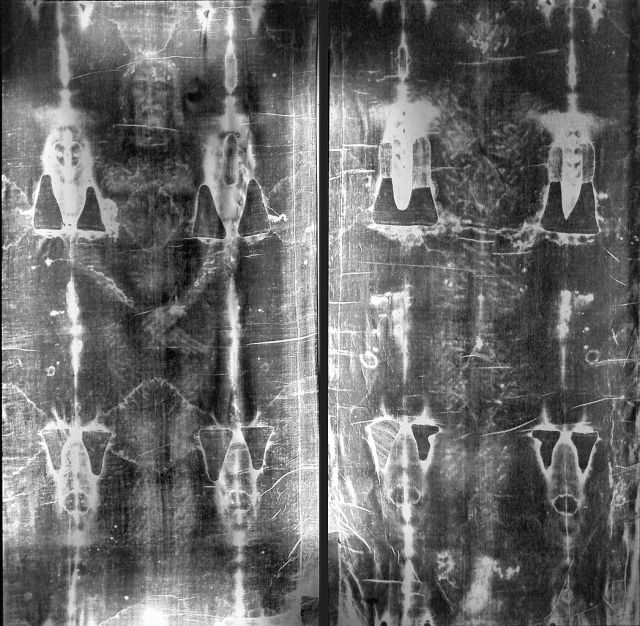 In 2015 when the Holy Shroud of Turin was last on public display I happened to be on that side of the Atlantic and made the effort to travel to Italy to venerate the shroud. I have written about it here, and here I have explained how the shroud is the scientific evidence that atheists are always asking for. Here I offer ten questions that non-believers should ask about the shroud.

Of all the mysteries about the Shroud of Turin, the most mysterious is the image itself. In 1978 a team of American researchers were finally given access to the shroud. They ran a whole series of tests covering the range of scientific disciplines. Their analyses found no sign of artificial pigments and they concluded, “The Shroud image is that of a real human form of a scourged, crucified man. It is not the product of an artist.” What formed the image? The scientists were stumped and admitted that “no combination of physical, chemical, biological or medical circumstances” could adequately account for the image.

More recently, Dr Paolo Di Lazzaro and his colleagues at Italy’s National Agency for New Technologies, Energy and Sustainable Economic Development (ENEA) experimented for five years, using modern excimer lasers to train short bursts of ultraviolet light on raw linen, in an effort to simulate the image’s coloration.So what formed the image? The best description is that it is an extremely delicate singe marking. Di Lazzaro concedes in an article for National Geographic that every scientific attempt to replicate it in a lab has failed. “Its precise hue is highly unusual, and the color’s penetration into the fabric is extremely thin, less than 0.7 micrometers (0.000028 inches), one-thirtieth the diameter of an individual fiber in a single 200-fiber linen thread.”

They came tantalizingly close to replicating the image’s distinctive color on a few square centimeters of fabric. However, they were unable to match all the physical and chemical characteristics of the shroud image, and reproducing a whole human figure was far beyond them. De Lazzaro explained that the ultraviolet light necessary to reproduce the image of the crucified man “exceeds the maximum power released by all ultraviolet light sources available today.” The time for such a burst would be shorter than one forty-billionth of a second, and the intensity of the ultra violet light would have to be around several billion watts.”

In another article at my main blog today I posit that this was the second Big Bang–that started the world into a new creation cycle.

4 Responses to The Shroud of Turin: Evidence for Easter