Reflection for the 2nd Sunday of Easter-Cycle B-2018 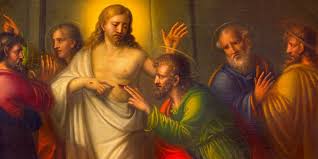 The community of believers was of one heart and mind, and no one claimed that any of his possessions was his own, but they had everything in common.  With great power the apostles bore witness to the resurrection of the Lord Jesus, and great favor was accorded them all.  There was no needy person among them, for those who owned property or houses would sell them, bring the proceeds of the sale, and put them at the feet of the apostles, and they were distributed to each according to need.

Beloved:  Everyone who believes that Jesus is the Christ is begotten by God, and everyone who loves the Father loves also the one begotten by him.  In this way we know that we love the children of God when we love God and obey his commandments.  For the love of God is this, that we keep his commandments.  And his commandments are not burdensome, for whoever is begotten by God conquers the world.  And the victory that conquers the world is our faith.  Who indeed is the victor over the world but the one who believes that Jesus is the Son of God?  This is the one who came through water and blood, Jesus Christ, not by water alone, but by water and blood.  The Spirit is the one that testifies, and the Spirit is truth.

On the evening of that first day of the week, when the doors were locked, where the disciples were, for fear of the Jews, Jesus came and stood in their midst and said to them, “Peace be with you.”  When he had said this, he showed them his hands and his side.  The disciples rejoiced when they saw the Lord.  Jesus said to them again, “Peace be with you.  As the Father has sent me, so I send you.”  And when he had said this, he breathed on them and said to them, “Receive the Holy Spirit.  Whose sins you forgive are forgiven them, and whose sins you retain are retained.”  Thomas, called Didymus, one of the Twelve, was not with them when Jesus came.  So the other disciples said to him, “We have seen the Lord.”  But he said to them, “Unless I see the mark of the nails in his hands and put my finger into the nail-marks and put my hand into his side, I will not believe.”  Now a week later his disciples were again inside and Thomas was with them.  Jesus came, although the doors were locked, and stood in their midst and said, “Peace be with you.”  Then he said to Thomas, “Put your finger here and see my hands, and bring your hand and put it into my side, and do not be unbelieving, but believe.”  Thomas answered and said to him, “My Lord and my God!”  Jesus said to him, “Have you come to believe because you have seen me?  Blessed are those who have not seen and have believed.”  Now Jesus did many other signs in the presence of his disciples that are not written in this book.  But these are written that you may come to believe that Jesus is the Christ, the Son of God, and that through this belief you may have life in his name.

Blesses are those who have not seen and have believed!  Jesus is clear in his words to Saint Thomas.  On the other hand, he accepts the doubts of Thomas, allows Thomas to touch Him and continues to be the friend of Thomas.

There are so many ways in which we could be closer to our Lord Jesus.  We cannot do everything at once.  Like Thomas, we must accept our defects and also acknowledge them before the Lord.

The first reading today is from the Acts of the Apostles and the basic teaching is this:  The community of believers was of one heart and mind, and they had everything in common.

We also know that this ideal state did not last for long before some began to withdraw from it or even to misuse it.  There are still religious communities today which try to live this way.  Most of us, however, share our goods with the causes that we find to be good.  Sometimes it is good to reflect that God shares Himself with both the good and the evil.  God gives to all.

The second reading is from the First Letter of Saint John.  The words that might touch us deeply today are these:  “The love of God is this, that we keep his commandments.”  Today so many people reject any kind of commandment, any kind of imposition from without.  If we ever want to know God, we must be open to allowing Him into our hearts.  God always brings commandments of one type or another.  If there are no commandments, then we are deluding ourselves about God.

Today’s Gospel is from Saint John.  Jesus has just been raised from the dead.  Now Jesus begins to appear to various of his followers.  He appears to His disciples and gives them the Holy Spirit.  This Gospel relates to us that Thomas was not present and would not believe the testimony of those who were.  This Thomas is hard headed.  So are so many of us today.  We find it difficult to accept the testimony of others, especially if we have doubts about what they are saying.  We want to see and touch and decide on our own and not just believe because someone else told me so.  This lack of faith has always been present, both within the Church and outside the Church.

This first week of the Resurrection, we place our lives and our faith in the hands of others and ask that they may learn and we may learn:  all for the glory of God.