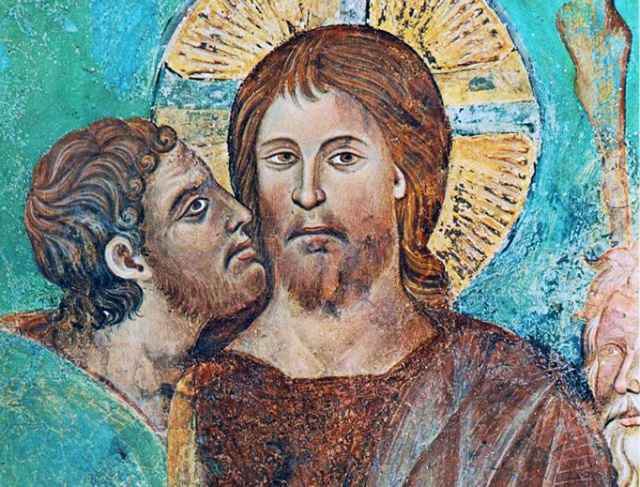 By Msgr. Charles Pope on 9th April at the National Catholic Register

Substituting sympathy for truth is a pervasive tendency in our times.

Rejoicing in the Easter glow, I hesitate to look back to two figures instrumental in the Passion and Death of the Lord, but I often get questions or comments about Judas and Pilate that demonstrate fundamental flaws in moral reasoning. Many people today either seek to exonerate them for their role in the crucifixion or they sympathize with them, citing what they view as exculpatory evidence.

One approach is to see Judas and Pilate as mere puppets in a play written by God; they were only doing what they had to do. Such a view robs both men of their dignity as free moral agents responsible for their actions (something at the very heart of being human). It also turns God into a kind of monster or manipulator, forcing people to do evil things. Further, it would have God break a fundamental moral principle: that we are not to do evil even if good may come from it. If Judas, Pilate, and others were forced by God to play a predestined role then God would be an evildoer because He would have compelled evil so that good would result.

None of this is acceptable. It involves deeply flawed moral reasoning and violates theological truth by misrepresenting God as an agent of moral evil. The fact that God permits evil and can draw good from it does not mean that He wills evil or that He directly causes others to do evil. This is a gravely offensive notion of God, who is Goodness, Truth and Love.

Regarding Judas, it is true that his betrayal of the Messiah was prophesied in Scripture:

*  Even my close friend in whom I trusted, who ate my bread, has lifted his heel against me (Psalm 41:9).
* Then I, [Zechariah] said to them, “If it seems good to you, give me my wages; but if not, keep them.” And they weighed out as my wages 30 pieces of silver. Then the Lord said to me, “Throw it to the potter”—the lordly price at which I was priced by them. So, I took the 30 pieces of silver and threw them into the house of the Lord, to the potter (Zechariah 11:12-13).
* And Peter rose and said, “Brothers, the Scripture had to be fulfilled, which the Holy Spirit spoke beforehand by the mouth of David concerning Judas, who became a guide to those who arrested Jesus. For he was numbered among us and was allotted his share in this ministry” (Acts 1:16-17).
* so [the Temple leaders] took counsel and bought with them the potter’s field as a burial place for strangers (Matthew 27:7).

It is also attested in the Scriptures that Jesus knew it was Judas who would betray Him:

* Jesus knew from the beginning who those were who did not believe, and who it was who would betray him…. Jesus answered them, “Did I not choose you, the twelve? And yet one of you is a devil.” He spoke of Judas the son of Simon Iscariot, for he, one of the twelve, was going to betray him (John 6:64, 70-71).
* Jesus became troubled in spirit and testified, “Truly, truly, I tell you, one of you will betray Me.” The disciples began to look at one another, perplexed as to which of them He meant…. [The beloved disciple] asked, “Lord, who is it?” Jesus answered, “It is the one to whom I give this piece of bread after I have dipped it.” Then He dipped the piece of bread and gave it to Judas son of Simon Iscariot. And when Judas had taken the piece of bread, Satan entered into him. Then Jesus said to Judas, “What you are about to do, do quickly” (John 13:21-27).
* Jesus said, “Father … While I was with [my disciples], I protected and preserved them by Your name, the name You gave Me. Not one of them has been lost, except the son of destruction, so that the Scripture would be fulfilled” (John 17:12).

None of this means, as many incorrectly assume, that God’s foreknowledge of Judas’ actions forced him to do them. I might observe you and see what you are inevitably going to do, but my knowledge of your certain course of action does not force you to do it nor does it rob you of your freedom in any way.

Further, that one is “destined” to do something does not mean that he is forced to do it. Rather, it means that God, who sees all history at once, knew what Judas would freely do and planned accordingly.

Judas remains a free moral agent throughout. He himself speaks of his own responsibility: “I have sinned,” he said, “for I have betrayed innocent blood” (Matthew 27:4).

What about Judas’ “repentance”? He realized that he had done what was wrong and threw the money back. Doesn’t this mean that he was contrite and deserves our sympathy?

This points to another common error of our times. Many people reduce contrition to “feeling bad” about having sinned or about something we have done. True contrition is more than a feeling. It involves a firm purpose of amendment. For Judas, amendment would have meant returning to the Lord and seeking God’s mercy. Judas does not turn to the Lord; instead, he turns inward and, deciding he cannot live with his anger or sorrow, kills himself. This behavior is quite different from that of Peter, who lived with his regret and faced the Lord, receiving His mercy at the lakeside in Galilee.

Thus, the notions that Judas was forced to do what he did and/or that he properly repented of his action must be seen for the errors they are. They do not comport with solid moral reasoning or proper theological notions.

Further, the widespread belief that Judas might be in Heaven may be just a tad optimistic. While the Church does not declare that any particular person is in Hell, we must recall that Jesus said the following about Judas: The Son of Man will go just as it is written about him. But woe to that man who betrays the Son of Man! It would be better for him if he had not been born. (Matthew 26:24). It is hard to imagine Jesus saying this of any person who ultimately makes it to Heaven.

The more likely biblical judgment on Judas is that he died in sin, despairing of God’s mercy on God’s terms. One is free to hope for a different outcome for him, but while the story of Judas and his possible repentance does generate sympathy and hope for him, the judgment belongs to God.

With Judas we have a hoped-for story that will never be told: The repentance of Judas and his restoration by Jesus! Think of all the churches that were never built: “The Church of St. Judas, Penitent.” Think of the feast days never celebrated: “The Repentance of Judas.”

Sadly, Judas went his way, freely. God did not force him to play this role. He only knew what Judas would do beforehand and based His plans on Judas’ free choice.

In Pontius Pilate we also have a figure who generates much sympathy today: “Poor Pilate, he really wanted to let Jesus go, but the angry crowd forced him to crucify Him. And Jesus didn’t help much, remaining rather quiet during the trial.” This is more flawed moral reasoning; it diminishes man as a moral agent capable of acting heroically in obedience to the truth. While fear can limit our perceived freedom and to some degree our culpability, we ought not to forget the virtue of fortitude, which equips us to do what is right even in the face of difficulty.

Pilate was not some forlorn figure thrust unprepared onto the stage of history. He was a local governor with the power of the Roman army at his disposal. While he is presented as a vacillating figure trying to placate the crowd and his conscience, proper moral reasoning demanded that he follow his conscience. Pilate knew that Jesus was innocent of the charges levied against Him. He had carefully interrogated Him on the charges and found them to be baseless. Jesus had no army nor were His supporters storming the gates to save Him. He represented no threat to Roman governance. Scripture presents Pilate’s conscience as clear on this point. Yet, he violated his conscience and did what he knew to be wrong and unjust. He did so to protect his career. Like each of us does, Pilate had to make a decision about Jesus—he failed to make the right one. Instead of taking a stand for Jesus, for justice and truth, Pilate assumed a seat, the Judgment seat, and condemned an innocent man to death.

None of us can be Pilate’s final judge; that role belongs to the Lord Jesus. He alone knows if Pilate’s fear was exculpatory to any degree.

Even if we cannot judge Pilate’s final place in Heaven or Hell, neither should we surrender important moral principles that summon us to stand up for what is true regardless of the cost. No one should violate his conscience for what is expedient or preferred. The truth is sometimes costly, and we cannot do what we know is wrong just because it might cost us something.

Ultimately, each of us has a decision to make about Jesus. Will we stand with Him even unto martyrdom or will we give way to what the “crowd” says? Will we crucify Jesus to save our own self or will we call Him Lord and allow Him to save us on his terms?

Yes, Pilate and Judas generate a lot of sympathy today. Sympathy has its place in understanding human affairs, but we cannot allow it to eclipse solid moral principles or to distort our understanding of God and the human person. We are free moral agents; this points to our dignity and to our responsibility. Robbing man of his dignity, eviscerating moral principles, distorting moral reasoning, and turning God into an evildoer shows the ugly side of misguided sympathy. This is a problem today that extends far beyond flawed modern notions of Pilate and Judas. Substituting sympathy for truth is a pervasive tendency in our times.

Why Didn’t Christ Stay with His Disciples Continuously from the Resurrection to His Ascension?

Four Qualities of Bold and Believable Witnesses to Jesus