The primary and true mission of the Church. An important reminder for Catholics at this perilous time!

“Go ye therefore and teach all nations, baptizing them in the name of the Father, and of the Son, and of the Holy Ghost” (Matt. 28:19)

“The Church would ignore the “real crisis” she faces today if she focuses on social justice issues rather than her basic mission to evangelize” – (Cardinal Robert Sarah).

‘The Church is gravely mistaken as to the nature of the real crisis if she thinks that her essential mission is to offer solutions to all the political problems relating to justice, peace, poverty, the reception of migrants, etc. while neglecting evangelisation,’ the cardinal told Aid to the Church in Need.

Sarah, who is the Prefect of the Congregation for Divine Worship, said that while the Church ‘cannot disassociate herself from the human problems,’ she will ultimately ‘fail in her mission’ if she forgets her real purpose.

The cardinal quoted Yahya Pallavicini, an Italian and former Catholic who converted to Islam, to drive home his point: ‘If the Church, with the obsession she has today with the values of justice, social rights and the struggle against poverty, ends up as a result by forgetting her contemplative soul, she will fail in her mission and she will be abandoned by a great many of her faithful, owing to the fact that they will no longer recognize in her what constitutes her specific mission.’

The Church’s mission is summed by Jesus in Matthew’s Gospel when he sent his followers to ‘go and make disciples of all nations, baptizing them in the name of the Father and of the Son and of the Holy Spirit, and teaching them to obey everything I have commanded you.’ This mission, according to the Catechism of the Catholic Church, means ‘proclaiming and establishing among all peoples the Kingdom of Christ and of God.’

Sarah’s remarks are interesting given the emphasis Pope Francis has placed on the Church working with migrants and refugees. In his addresses to world leaders, Pope Francis frequently highlights political problems, such as migration, with little mention of Christ or the Church’s evangelical call.” […]

In his interview with Aid to the Church in Need, Cardinal Sarah criticized charitable organizations, specifically mentioning “Catholic ones,” that focus “unilaterally and exclusively on addressing situations of material poverty” while neglecting spiritual poverty.

“But ‘man does not live by bread alone, but on every word that comes from the mouth of God”, as Jesus tells us,” the cardinal said.

Sarah said that those who work to make the world more just, mentioning especially priests and bishops, must continually draw strength from God if their work is to bear lasting fruit.

“For it is true that those bishops and priests who do not take the time – at least for a few days – to place themselves in the presence of God in solitude, silence and prayer, risk dying on the spiritual level, or at the very least, drying out spiritually within,” he said.

“For they will no longer be capable of providing solid spiritual nourishment to the faithful entrusted to them if they themselves do not draw strength from the Lord in a regular and constant manner,” he added. 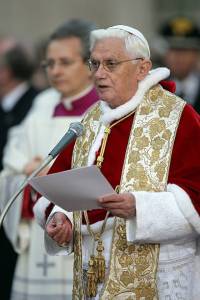 Pope Benedict XVI at the celebration of the Immaculate Conception at Spanish Steps in Rome..

Standing before a statue of Mary near the Spanish Steps some years ago, on the Feast of the Immaculate Conception, Pope Benedict XVI reminded his listeners that the Gospel is the good news of freedom from sin, that it is “the proclamation of the victory of grace over sin, of life over death.” Proponents of the “social gospel” have forgotten this. The mission of the Church is not to eradicate poverty or social injustice. As Dr. Dietrich von Hildebrand explains, while “a deep interest in the earthly welfare of our neighbor is a central duty of the Christian and an essential demand of the love of neighbor,” still, “it is definitely no part of the message of Christ that there is to be no more poverty, no more war, that the earth is to become a natural paradise.”

Proponents of the “social gospel” fail to understand, as Dr. Hildebrand reminds us, that “..the primary task of the Church is the proclamation of the divine Revelation, the protection of it against all heresies, the the sanctification of the soul of the individual, the securing of his eternal salvation – this is the spreading of the kingdom of God on earth, and not the attempt to build up an earthly paradise.” (Essay entitled This-Worldliness).

Dr. Hildebrand explains that, “…the motive of many for eliminating poverty (which itself is not morally wicked, but only a morally relevant evil) is not rooted in the spirit of Christ or His Gospel, but in a humanitarian ideal. The widespread tendency today to demand everything as a right and to refuse to accept any gifts is surely no manifestation of a Christian spirit. There is in reality a clear, sharply delineated difference between justice and love. Justice can and should be protected and demanded by state law; but love of neighbor could never be demanded by any law. For it is a duty before God, and no state law could or should prescribe it or enforce it. Love of neighbor presupposes the fulfillment of the claims of justice, but it goes far beyond this. The words of the Gospel, ‘if someone asks you to go one mile, go two miles with him,’ clearly go far beyond the sphere of justice. Of course, it is a pharisaical hypocrisy to the demands of justice as if one were giving alms. But it is a terrible pride not to want to accept any alms, and to demand that which comes as a gift. The true Christian should be happier to receive alms and to be grateful for them, than simply to receive what he has a right to. When he receives a gift he is happy not only over the good which is the gift, but also over the goodness of the giver; and he experiences it as a great source of happiness that he can and should be grateful.”

Priests and deacons who have succumbed to the distortions of the “social gospel” seldom, if ever, preach against sin or remind their listeners of the reality of Hell. Dr. Hildebrand addresses this fact saying that, “this-worldly tendency can be detected in various pastoral letters, and above all in countless sermons. One speaks more about the fight against poverty and for social justice and world peace – in a word, more about improving the world – than about offending God by our sins, sanctifying the individual, about heaven and hell, eternity and the hope of eternal union with God in the beatific vision. The this-worldly tendency emphasizes the earthly future more than eternity…” (This-Worldliness).

The true Christian, in the Creed, proclaims: Et exspecto resurrectionem mortuorum, et vitam venturi saeculi – ‘We look for the resurrection of the dead, and the life of the world to come.” But proponents of the “social gospel” have largely abandoned such a hope and prefer instead to embrace a humanitarian religion and to work for an earthly “utopia.” Robert Hugh Benson, in his classic work entitled The Lord of the World, describes this humanitarian religion:

“Humanitarianism..is becoming an actual religion itself; though anti-supernatural. It is a pantheism. Pantheism deifies all nature, God is the world, but naturally, man above all is God since he is the highest expression of nature. It is a religion devoid of the ‘super’ natural, because since God is nature itself, there is no longer a distinction between Creator and creature. The creature is God and hence arbitrator of his own destiny and establishes the moral law for himself….Humanitarianism is a religion devoid of the supernatural. It is developing a ritual under Freemasonry; it has a creed, ‘God is man’; and the rest. It has, therefore, a real food of a sort to offer religious cravings: it idealizes and yet makes no demands upon the spiritual faculties…” (Introduction, p. xvii).

The Church’s mission is not to solve poverty. In fact, Jesus said that we would always have the poor with us (Mark 14: 7). The Church’s mission is the salvation of souls. When a crowd of people went searching for Jesus and found Him on the other side of the Sea of Galilee, they said to Him, ‘Rabbi, when did you come here?’ And Jesus answered them, ‘Truly, truly, I say to you you seek me, not because you saw signs, but because you ate your fill of the loaves. Do not labour for the food which perishes, but for the food which endures to eternal life, which the Son of Man will give to you; for on Him has God the Father set His seal.” The crowd said to Him, “What must we do, to be doing the works of God?” And Jesus answered them: “This is the work of God, that you believe in Him who He has sent.” (John 6: 25-29).

The work of God is believing in Him whom the Father has sent. Jesus reveals Himself as the Bread of Life. He reveals in the synagogue who He is, where He comes from and the good things He has in store for those who believe in Him: faith, the Eucharist and eternal life.

Proponents of the ‘social gospel” have forgotten that “man shall not live by bread alone, but by every word that proceeds from the mouth of God” (Matthew 4: 4). Crippled by distorted humanitarian ideals, such confused souls forget Our Lord’s injunction to “seek first the kingdom of God and His righteousness, and all these things (food, drink, clothing etc) shall be yours as well.” (Matthew 6: 33).