Thomas Evans Breaks Silence: “They paid £143k on murdering my son and taking our lives away from us!!!! We are not done!” 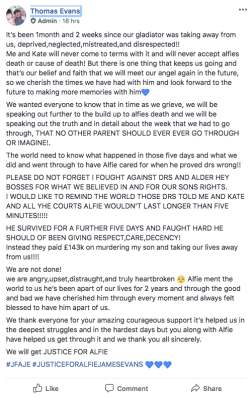 Yesterday, in a post on the Alfies Army Official Facebook group, Thomas Evans, the father of Alfie Evans, broke more than six weeks of silence on the death of his son.

This followed posts by Sarah Evans and Daniel Evans, the child’s aunt and uncle, revealing the results of a recent Freedom of Information Act request that Britain’s National Health Service had paid at least £143,000 in legal fees to keep Alfie Evans at Alder Hey hospital. 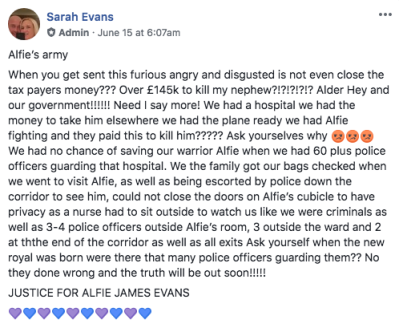 As far as I understand it, the parents of Alfie Evans had been effectively silent since Thomas Evans had made an accommodationist “statement” on April 26th, a few hours before Alfie Evans would pass away. This came after weeks of angry words against Alder Hey and the NHS from Thomas and Katie, as well other family members. Many felt that the apparent turnabout was due to some sort of deal with the hospital, perhaps made in return for a promise – a promise which would be tragically unfulfilled – that Alfie Evans would be allowed to be taken home.
In the statement at that time, partly addressed to the family’s supporters, Thomas Evans said:

We would now ask you to return back to your everyday lives and allow myself, Katie and Alder Hey to form a relationship, build a bridge and walk across it.

From this point onwards there will be no more statements issued or interviews given.

[Alder Hey] paid £143k on murdering my son and taking our lives away from us!!!!

We are not done!

Alfie Evans was murdered by the state, and abandoned by his Church.
An online mob, many members of whom would rather see an infant killed than be caught making a grammatical error on social media, bayed for his death.
But on this Father’s Day, I can’t imagine how he could have been graced with better parents than Tom and Kate.
Thomas Evans, June 16:

It’s been 1month and 2 weeks since our gladiator was taking away from us, deprived,neglected,mistreated,and disrespected!!

Me and Kate will never come to terms with it and will never accept alfies death or cause of death! But there is one thing that keeps us going and that’s our belief and faith that we will meet our angel again in the future, so we cherish the times we have had with him and look forward to the future to making more memories with him

The world need to know what happened in those five days and what we did and went through to have Alfie cared for when he proved drs wrong!!

PLEASE DO NOT FORGET I FOUGHT AGAINST DRS AND ALDER HEY BOSSES FOR WHAT WE BELIEVED IN AND FOR OUR SONS RIGHTS.
I WOULD LIKE TO REMIND THE WORLD THOSE DRS TOLD ME AND KATE AND ALL YHE COURTS ALFIE WOULDN’T LAST LONGER THAN FIVE MINUTES!!!!!

HE SURVIVED FOR A FURTHER FIVE DAYS AND FAUGHT HARD HE SHOULD OF BEEN GIVING RESPECT,CARE,DECENCY!

Instead they paid £143k on murdering my son and taking our lives away from us!!!!

We are not done!

we are angry,upset,distraught,and truly heartbroken

😔 Alfie ment the world to us he’s been apart of our lives for 2 years and through the good and bad we have cherished him through every moment and always felt blessed to have him apart of us.

We thank everyone for your amazing courageous support it’s helped us in the deepest struggles and in the hardest days but you along with Alfie have helped us get through it and we thank you all sincerely.

We will get JUSTICE FOR ALFIE

1 Response to Thomas Evans Breaks Silence: “They paid £143k on murdering my son and taking our lives away from us!!!! We are not done!”