The Chair of Peter.

CP&S:   I thought very hard about putting this post, from Bishop Emeritus Gracida  on Catholicism Pure & Simple following the discourse recently. I am not a Canon Lawyer and assume the quoted Canons to be correct. I also do not doubt that this post will produce differences of opinions. However, these contradictions are being talked about  throughout the Catholic world, and many are confused. One thing is certain irrespective of how you feel – the Chair of Peter IS NOT VACANT. 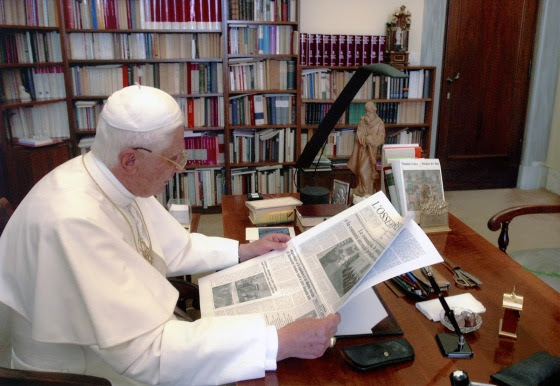 Pope Benedict XVI did not renounce the divine office that in 2005 made him Vicar of Christ, but only to the ministry of Bishop of Rome and to the administrative offices of the Papacy, by declaring (speech of February 27, 2013) that he would maintain the ” petrino primacy “, for which he showed that he still carries on his shoulders the burden and the vocation of being the Vicar of Christ. That can not be renounced, it is a quality “ad vitam” granted by Christ to Peter and his successors.

Pope Ratzinger pronounced, one day before taking the helicopter to temporarily retire to Castel Gandolfo, a speech that clarifies the situation that keep the two “Popes” who currently live in Rome.

In that speech he referred to the invitation he received from God when he was elected San Pedro’s successor on April 19, 2005. On that occasion he said (paragraph 23) that the vocation he received from Christ is ad vitam (for life) and that, for that reason, he will never be able to renounce it (as all Popes always understood in the history of the Church): “He is always also a forever, there is no more a return to the private”. “My decision to renounce the active exercise of ministry does not revoke this (the Petrine primacy).”

In addition, Benedict established, before the legal organs of the Church, that he would keep the white cassock, keep the name “His Holiness”, keep the keys of Peter on his shield, and continue to be Pope, simply adding the epithet “emeritus”. The latter is very significant because, when Pope Gregory XII resigned, he was again a cardinal, and when Pope Celestine V resigned, he became a monk again. This was not established by Pope Benedict XVI. He established that he would continue to be Pope, a case totally unprecedented in the history of the Church.

That speech clearly expresses the conviction that he would continue to be Vicar of Christ and spiritual head of the Church, and that he was only resigning from the administrative offices of the papacy. In his mind, one thing is the ministry of the bishop of Rome, and another thing is the Petrine primacy, which is ad vitam and can not be renounced. Sic et simpliciter.

Let’s see the literal tenor of Canon 332.2 CDC:
“If contingat ut Romanus Pontifex muneri suo renuntiet, ad validitatem requiritur ut renuntiatio libere fiat et rite manifestetur, non vero ut a quopiam acceptetur”. (“If the Roman Pontiff renounces his office, it is required, for validity, that the resignation be free and be formally manifested, and that it be accepted by no one.”

Reading the text of the resignation of Benedict XVI it is observed that the Pope did not renounce the Petrine munus but only the ministerium as bishop of Rome: “I declare to me the ministry of Episcopi Romae … commisso renuntiare”.

A person as wise as Benedict XVI understood perfectly that the renunciation of the papacy, to be valid, required to renounce the munus, not only to exercise it (ministerium). It is not possible here to claim ignorance. Not in him, who is one of the most learned and knowledgeable of ecclesiastical matters. Therefore, that difference in the formula used meant something. Something like: “I am still the Vicar of Christ, even if I renounce the executive government of the Church. I can not say it openly, but here I will continue, dressed as a Pope, living in the Vatican and calling me “His Holiness”, for those who want to understand it “.

Benedict XVI is still the Vicar of Christ, because he never resigned to such a position but, for clarity, he explicitly tells us that he only renounced the ministerium.

Remember that the papacy is a charge, as the Dogmatic Constitution Lumen Gentium reminds us: “Because the Roman Pontiff has on the Church, by virtue of his office (munus) as Vicar of Christ and Pastor of the whole Church, full, supreme and universal power, which can always exercise freely. ” This was also stated by Vatican Council I in 1870, repeating the previous Magisterium, in particular, that of the Council of Florence of the fifteenth century.

In the papacy, the munus is received with the election in the conclave and lost with death, and the ministerium, which is inseparable to him, is equivalent to the legal practice of the bishopric of Rome, today head of all episcopates. Having separated them, Benedict XVI is sending a very fine and delicate message to the world and to the Church.

The famous words of Monsignor Gänswein, German archbishop, jurist, personal secretary of Benedict XVI and prefect of the Pontifical House of “Francis”, on a “long ministry” (with two members) strongly confirm that same conclusion: Benedict XVI continues maintaining the investiture or munus, then Francisco is not really the Vicar of Christ.

Monsignor Gänswein recalled that Benedict XVI did not renounce either his name or his white talar habit: “He did not retire to an isolated monastery, but continues inside the Vatican, as if he had only stepped aside, to give space to his successor and a new stage in the history of the papacy. ”

That is why Benedict XVI is still dressed in white, with his skullcap, the fisherman’s ring, his title of Pope and the name of His Holiness. He did not become Cardinal Ratzinger again, as happened with Gregory XII, who once again became Cardinal Angelo Correr after resigning. Benedict remains in the Vatican and has not returned to his beloved Bavaria or to some distant monastery, and is not Cardinal Ratzinger.

Needless to say that Monsignor Gänswein did not make these very serious statements without the support of Benedict XVI himself. It was only an explanation of the conclusions in his farewell of February 27, 2013.

In fact, Benedict XVI did not use the resignation formula established by Boniface VIII. The norm expresses that regulates the discipline on the papal renunciation is found in the Apostolic Constitution Quoniam aliqui, which was fixed in the Code of Canon Law of 1917, and currently in the aforementioned canon of the CDC of 1983, # 322.2.

Let’s see the text of that Decretal by Boniface VIII:
“Decree of Boniface VIII (in 6 °), 1.1, T.7, chap. 1: De Renunciatione: “resignare valeat Papatui, eiusque oneri, et honori …”. That is to say, it is established that he must explicitly renounce his position and all his honors.

Nor did he use the formula used to resign used by the only pope who did it before him, Celestino V: “cedo Papatui, and expresse resignation loco, et dignitati, oneri, et honori” (“I withdraw from the papacy and, expressly, I resign to the place and its dignities, burdens and honors »).

On the contrary, Benedict XVI uses for the first and only time the explicit and clear formula “Ministry Episcopi Romae … commisso renuntiare” (renounced the ministry of Bishop of Rome).

Conclusion: in the Declaration of renunciation read by Benedict XVI on February 27, 2013, there is no mention of canon 332.2 of the CDC, which seems strange coming from someone so knowledgeable and thorough the theologian. Neither did he use the formula of the Decretal of Boniface VIII (renuntiare Paptui) nor the formula validly used by Celestino V (oneri et onori). Great message for the Church and for the world:

14 Responses to The Chair of Peter.