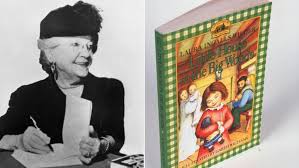 The Wilder award has been renamed because the author is out of step with ‘core values’. But there’s so much more to her work

I felt somewhat gloomy when I read that the Association for Library Service to Children (ALSC) in America has now renamed what was formerly the Wilder Award, electing to call it the deliberately impersonal Children’s Literature Legacy Award. As generations of parents and children know, “Wilder” refers to author Laura Ingalls Wilder, who wrote a series of books for children in the 1930s and 1940s describing – with some artistic licence – her late 19th-century upbringing in a pioneer family.

Now it seems that Little House in the Big Woods (of Wisconsin), On the Banks of Plum Creek (a dugout in Minnesota), By the Shores of Silver Lake (Dakota Territory), The Long Winter (De Smet, South Dakota) and the others in the series have fallen foul of the ever-vigilant body of people who decide what is “inclusive”, what reflects “diversity” – and what is not in step with “core values”.

Because Ingalls Wilder’s attitudes to Native Americans mirrored the attitudes of her day, she occasionally included phrases and opinions that have rightly been censured in today’s more multicultural society. Thus one character’s observation in the pioneer world of the US after the Civil War that “The only good Indian is a dead Indian” is seen as shocking – conveniently forgetting that another, Pa, responded in a way entirely consonant with his humane and tolerant personality: “The Indians would be as peaceable as anyone else if they were left alone.”

I read all the Ingalls Wilder books to our daughters. What remains in my memory is not the rare lapse referred to above but the enduring values of family life, in which a father and mother loved each other and worked hard to provide for their children; where life was materially very hard (Laura’s favourite doll which was simply a paper cut-out) and sometimes dangerous; where survival depended on each family member sacrificing their own wishes; yet where there was still time to sit and listen to Pa playing his fiddle in the evening, bake festive food or to make “sugar snow”.

I recall once going into the bedroom of my oldest daughter, then aged 8 or 9, and finding her crying. When I asked what the matter was, she sobbed, “Mary has gone blind.” This was Laura’s older sister, the less adventurous Mary, who went blind through contracting meningitis (in the story it is changed to scarlet fever). I also recall trying to make “sugar snow” with our younger daughters. And I recall marvelling at the way patient, resourceful Ma kept the children busy and their spirits up as they sat in one room all day trying to keep warm during the freezing months of The Long Winter.

Wilder’s books are, alongside CS Lewis’s Narnia series, Anne of Green Gables and others, rightly regarded as classics of children’s literature. They will be read and reread long after all the texts manufactured by committees about “relevant issues” gather dust in the classroom.

8 Responses to Here we go again!