The Pillars, the Trees and the Eucharistic Lamb

As we have stated, the battle between Satan and the Chuch began with the Holy Sacrifice and the Sacred Priesthood as seen in the Apocalypse. Today we repost the following in order to refocus our efforts on this most vital lesson.

The Apocalypse shows that the triumph of Christ will be a Eucharistic triumph. That is why the Message of Fatima actually began in 1916 with the Archangel Michael teaching the children Eucharistic adoration and reparation … This is another reason why the First Saturdays of Reparation are vital. Without them, the Pope will not be able to repent and Consecrate Russia.

We continue to explore the meaning of Chapter Five of the Apocalypse; and in today’s post we will look at a couple of church approved private revelations, one from St. John Bosco and one from Blessed Elizabeth Canori-Mora. Both revelations point to the same essential truth, which we affirmed above. 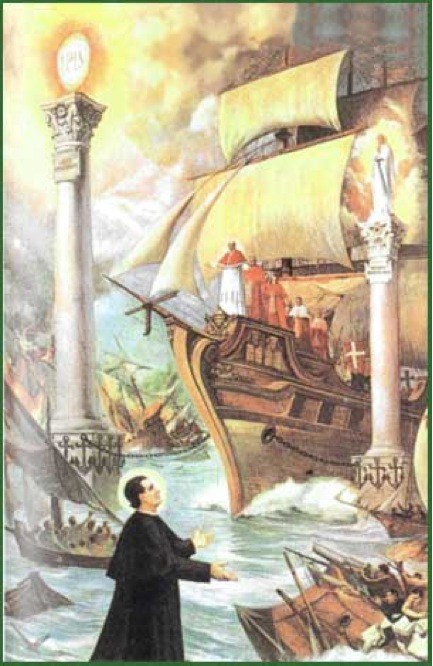 In May, 1862, Don Bosco told of a dream he had of the Church as a stately ship in stormy waters, being besieged by many lesser ships. The ship’s commander, the Pope, was attempting to bring the ship between two pillars to which he would moor it. After the Commander Pope was killed, another Pope took over and successfully moored the ship between the two columns. Don Bosco identified the smaller of the two pillars as Mary, Help of Christians and the larger one as the Most Blessed Sacrament, Salvation of Believers. Note, that in St. John Bosco’s dream, the ship of the Church was struggling to fight off attackers and return to safe harbor between the two pillars of devotion to the Blessed Virgin Mary and the Holy Eucharist. Thus, the Church was attempting to return to those devotions, implying that the Church had become unmoored from them. This was a vision of our post-conciliar church. (“Fatima, Vatican II and the Chastisement”)

(Note, that this vision is also a prophetic indication of the way in which the crisis will be resolved. That is, by a return to the Holy Sacrifice of the Mass, the Eucharistic Lamb.)

And now for Blessed Canori-Mora’s vision of St. Peter and the Cross-shaped Trees. This vision is a bit more complex and consequently has been the subject of more interpretation, thus confusion. Here is the account from Rev. Culleton’s “The Prophets and Our Times“:

It seemed to me to behold the heavens opening, and St. Peter, Prince of the Apostles, coming down, surrounded with great glory and by a numerous escort of heavenly spirits singing canticles. St. Peter was dressed in his pontifical robes, and held in his right hand the pastoral staff, with which he was drawing upon the earth an immense cross; at the same time the angels sang these words of the Psalmist, ‘Thou shalt make them princes over the whole earth.’

“After this the holy Apostle touched with his staff the four extremities of the cross, from which instantly sprung up four beautiful trees loaded with blossoms and fruits. These mysterious trees had the form of a cross, and were surrounded by a splendid light. Then I comprehended in the depth of my soul that St. Peter had produced these four symbolic trees to the end that they may serve as a place of refuge to the little flocks of the faithful friends of Jesus Christ, and in order to preserve them from the fearful punishment which shall convulse the whole earth. All good Christians shall then be protected under these trees, together with all those religious persons who shall have faithfully preserved in their hearts the spirit of their order. I say the same thing in relation to the secular clergy and to all other persons of every class who shall have kept in their heart the Catholic faith— they shall all be protected.

“But woe, to those religious who do not observe their rule! Thrice unhappy they! For they shall all be struck by that terrible punishment. I say the same to all secular clergy, and to all classes of people in the world who give themselves to a life of pleasure, and who follow the false maxims of modern ideas, which are opposed to the holy precepts of the gospel. These wretched people, who through their scandalous conduct deny the faith of Jesus Christ, shall perish under the weight of the indignant arm of God’s justice. Not one of them shall be able to escape the punishment.

“I beheld these good Christians, who had sought a refuge under those mysterious trees, in the form of beautiful lambs confided to the care and vigilance of St. Peter, their good shepherd, testifying to him the most humble and most respectful obedience. As soon as St. Peter, the prince of the Apostles, had gathered the flock of Jesus in a place of safety, he re−ascended into heaven, accompanied by legions of angels. Scarcely had they disappeared, when the sky was covered with clouds so dense and dismal that it was impossible to look at them without dismay. On a sudden there burst out such a terrible and violent wind, that its noise seemed like the roars of furious lions. The sound of the dreadful hurricane was heard over the whole earth. Fear and terror struck not only men, but the very beasts.

“All men shall rise one against the other, and they shall kill one another without pity. During this sanguinary conflict the avenging arm of God will strike the wicked, and in His mighty power He will punish their pride and presumption. God will employ the powers of hell for the extermination of these impious and heretical persons who desire to overthrow the Church and destroy it to its very foundation. These presumptuous men in their mad impiety believe that they can overthrow God from His throne; but the Lord will despise their artifices, and through an effect of His Mighty Hand He will punish these impious blasphemers by giving permission to the infernal spirits to come out from hell. Innumerable legions of demons shall overrun the earth, and shall execute the orders of Divine Justice by causing terrible calamities and disasters; … Nothing on earth shall be spared. God will allow the demons to strike with death those impious men, because they gave themselves up to the infernal powers, and had formed with them a compact against the Catholic Church.

“Being desirous of more fully penetrating my spirit with a deeper sentiment of His Divine Justice, God showed to me the awful abyss; I saw in the bowels of the earth a dark and frightful cavern, whence an infinite number of demons were issuing forth, who under the form of men and beasts came to ravage the earth, leaving everywhere ruins and blood. Happy will be all true and good Catholics! They shall experience the powerful protection of the holy Apostles, … Those evil spirits shall plunder every place where God has been outraged, despised, and blasphemed; the edifices they profaned will be pulled down and destroyed, and nothing but ruins shall remain of them.

“After this frightful punishment I saw the heavens opening, and St. Peter coming down again upon earth; he was vested in his pontifical robes, and surrounded by a great number of angels, who were chanting hymns in his honor, and they proclaimed him as sovereign of the earth. …

“Then a great light appeared upon the earth which was the sign of the reconciliation of God with man. The angels conducted before the throne of the prince of the Apostles the small flock that had remained faithful to Jesus Christ. These good and zealous Christians testified to him the most profound respect, praising God and thanking the Apostles for having delivered them from the common destruction, and for having protected the Church of Jesus Christ by not permitting her to be infected with the false maxims of the world. St. Peter then chose the new pope. The Church was again organized; religious orders were reestablished; the private families of ordinary Christians, through their great fervor and zeal for the glory of God, became like the most exemplary religious communities. Such is the glorious triumph reserved for the Catholic Church; she shall be praised, honored, and esteemed by all men. All men shall become Catholics, and shall acknowledge the Pope as Vicar of Jesus Christ.”

(The quotations above are excerpts from The Kindle Edition of Rev. R. Gerald Culleton’s book, “The Prophets and Our Times“ produced by KIC.)

In the prophecy of St. John Bosco we see that the smaller pillar is titled “Mary, Help of Christians” . Thus, Our Lady of Victory, she who is the help of Christians, will be triumphant over Islam, converting the survivors of this false religion to the true faith. We see also that St. Bosco’s vision shows that Rome shall have become unmoored from the Holy Sacrifice of the Mass and the sacred dogma of the Real Presence, but will return to it and be granted peace at last. How shall this be accomplished?

We know one portion already, that which is contained in the revelations given at Fatima by Our Lady of the Rosary. For the other portion, we began by our earlier post, “The Sacred Priesthood and the Holy Sacrifice“. Now we continue with Blessed Elizabeth Canori-Mora’s insights. In the very first paragraph, she quotes, “Thou shalt make them princes over all the earth” from Psalm 44, 17. That Psalm refers to the noble character of the Holy Catholic Church, the beautiful Bride of Christ and her Royal Priesthood.

And now we pass to the foretelling of the period immediately preceding the Chastisement, the period of most interest to us. This passage details the steps taken by the first Vicar of Christ to save the Church from ruin. St. Peter intervenes to establish four communities which Blessed Elizabeth describes symbolically a cross-shaped in order to emphasise that these sheltering communities are firmly rooted in the tradition of the Church, that is founded upon the Holy Sacrifice of the Mass and thus, the Eucharistic Lamb. Hence:

St. Peter had produced these four symbolic trees to the end that they may serve as a place of refuge to the little flocks of the faithful friends of Jesus Christ, and in order to preserve them from the fearful punishment which shall convulse the whole earth.

She then foretells the Chastisement, “demons were issuing forth, who under the form of men and beasts came to ravage the earth, leaving everywhere ruins and blood.” This also has been covered in previous posts but will be reviewed in a scheduled post.

“Then a great light appeared upon the earth which was the sign of the reconciliation of God with man”.

That is, the often foretold great Cross in the Heavens, after which the Church will be restored through those few faithful communities which have preserved the holy Sacrifice of the Mass and the Sacred Priesthood, that is, those who remain rooted in the true faith.

† Immaculate Heart of Mary, Queen of our hearts, Mother of the Church, do thou offer to the Eternal Father the Precious Blood of Our Lord Jesus Christ, for the conversion of poor sinners, especially our Pontiff.

[From RETURN TO FATIMA]

2 Responses to The Pillars, the Trees and the Eucharistic Lamb