Our Lady Instructs St. Dominic to Preach the Rosary

The month of October, dedicated in a special way to the Rosary of the Blessed Virgin Mary, is drawing to a close. So let us listen to the wise words of St. Louis de Montfort on the importance of preaching this holy prayer at all times since “all kinds of sin and disorder have spread far and wide”,  but the Rosary is the weapon we need to combat this evil.

The miraculous way in which the devotion to the holy Rosary was established is analogous to the way in which God gave His Law to the world on Mount Sinai, and it obviously proves its value and importance.

Inspired by the Holy Spirit, instructed by the Blessed Virgin as well as by his own experience, St. Dominic preached the Rosary for the rest of his life. He preached it by his example as well as by his sermons, in cities and in country places, to people of high station and low, before scholars and the uneducated, to Catholics and to heretics.

The Rosary, which he said every day, was his preparation for every sermon and his little tryst with Our Lady immediately after preaching.

One day he had to preach at Notre Dame in Paris, and it happened to be the feast of St. John the Evangelist. He was in a little chapel behind the high altar prayerfully preparing his sermon by saying the Rosary, as he always did, when Our Lady appeared to him and said:

“Dominic, even though what you have planned to say may be very good, I am bringing you a much better sermon.” St. Dominic took in his hands the book Our Lady proffered, read the sermon carefully and, when he had understood it and meditated on it, he gave thanks to her.

When the time came, he went up into the pulpit and, in spite of the feast day, made no mention of St. John other than to say that he had been found worthy to be the guardian of the Queen of Heaven. The congregation was made up of theologians and other eminent people, who were used to hearing unusual and polished discourses.

But St. Dominic told them that it was not his desire to give them a learned discourse, wise in the eyes of the world, but that he would speak in the simplicity of the Holy Spirit and with His forcefulness.

The pulpit of Notre Dame of Paris

So he began preaching the Rosary and explained the Hail Mary word by word as he would to a group of children, and used the very simple illustrations which were in the book given him by Our Lady. …

“Then St. Dominic explained the Angelic Salutation to them, using simple comparisons and examples from everyday life.”

Blessed Alan, according to Carthagena, mentioned several other occasions when Our Lord and Our Lady appeared to St. Dominic to urge him and inspire him to preach the Rosary more and more in order to wipe out sin and convert sinners and heretics.

In another passage Carthagena says:

“Blessed Alan said Our Lady revealed to him that, after she had appeared to St. Dominic, her Divine Son appeared to him and affirmed:

“Dominic, I rejoice to see that you are not relying on your own wisdom and that, rather than seek the empty praise of men, you are working with great humility for the salvation of souls.

“But many priests want to preach thunderously against the worst kinds of sin at the very outset, failing to realize that before a sick person is given bitter medicine, he needs to be prepared by being put into the right frame of mind to really benefit from it.

“That is why, before doing anything else, priests should try to kindle a love of prayer in people’s hearts and especially a love of my Angelic Psalter. If only they would all start saying it and would really persevere, God in His mercy could hardly refuse to give them His grace. So, I want you to preach my Rosary. ” (2)

In another place Blessed Alan says: 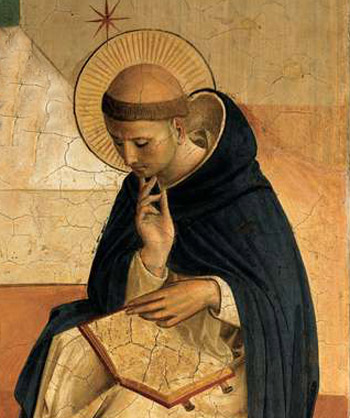 St. Dominic takes the instruction of Our Lady on the Rosary and reaps its fruits for his preaching

All priests should say a Hail Mary with the faithful before preaching, to ask for God’s grace. (3) They do this because of a revelation that St. Dominic had from Our Lady.

“My Son,” she said one day, “do not be surprised that your sermons fail to bear the results you had hoped for. You are trying to cultivate a piece of ground that has not had any rain. Now, when God planned to renew the face of the earth, He started by sending down rain from heaven – and this was the Angelic Salutation. In this way God reformed the world.

“So when you give a sermon, urge people to say my Rosary, and in this way your words will bear much fruit for souls.”

St. Dominic lost no time in obeying, and from then on he exerted great influence by his sermons.” (4)

I have been very pleased to quote these well-known authors word for word for the benefit of those who might otherwise have doubts as to the marvelous power of the Rosary. As long as priests followed St. Dominic’s example and preached devotion to the Holy Rosary, piety and fervor thrived throughout the Christian world and in those religious orders which were devoted to the Rosary. But since people have neglected this gift from Heaven, all kinds of sin and disorder have spread far and wide.