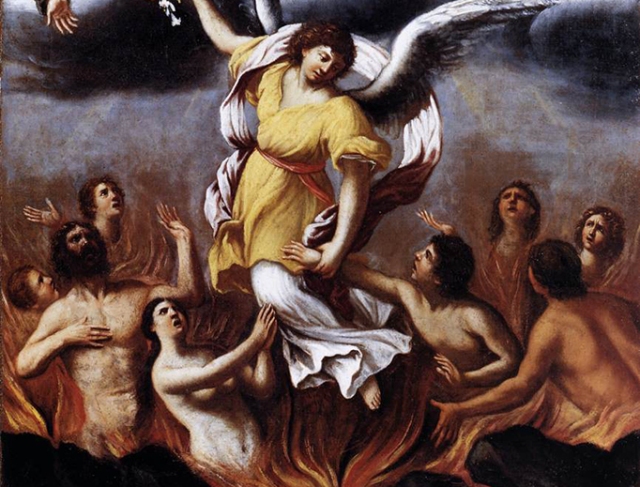 Admit it: You (and I) began this month of November praying for all departed souls in purgatory. And then, we seemed to have trailed off a bit. (I know that I have. Mea culpa!) However, it is never too late during this month when we remember our beloved dead, to pick up the prayers and finish strong — especially with the help of several powerful saints.

Last year I wrote about the moving and effective prayer of St. Gertrude the Great for the souls in purgatory.

Also, starting Nov. 30 through Christmas Day is the prayer of Saint Andrew, who holds the unique distinction of being the last saint named before consecration at Holy Mass according to the Extraordinary Rite. (For more on St. Andrew’s prayer, read this, which is more of a reflection on the Annunciation and Incarnation, but is a fitting close to the Month of the Dead.)

St. Cecilia (Nov. 22), is not only the patron saint of musicians, but is known for her “Passion” — a poem recounting her devotion to Christian virginity — and a martyr circa the third century, who died in Rome.

The end of November also provides a slew of other martyr-saints who are powerful intercessors for those still in purgatory. Nov. 23 was the feast of St. Clement of Rome, the fourth pope, who died around the year 100 under the Emperor Trajan. His famous “Epistle To The Corinthians” is the first volume in the acclaimed Ancient Christian Writers Series. This same Epistle is found in the Liturgy of the Hours.

On that same day we recalled Blessed Miguel Agustín Pro (d. 1927), a Mexican Jesuit who was murdered for the faith by his own government during its 20th-century purge of Catholicism. His last, edifying words were: “Long Live Christ The King.”

A couple hundred years prior (from the 1600s to the beginning of the twentieth century), and thousands and thousands of miles away, St. Andrew Dung-Lac (Nov. 24) and his companions all perished for the true faith in Vietnam — the total number is believed to be about 130,000. The Catholic Church has since flourished in that country.

And of course all these saints are subordinate to the Mother of God, Mary Most Holy, whose Presentation in the Temple we celebrated on Nov. 21. She is truly the mother of sorrows.

This title for Mary — “Our Lady of Sorrows” — recently reminded that my great-grandmother, Addoloratta (which is the Italian equivalent of “Sorrowful Mother”) Di Camillo, was a founding member of the Purgatory Society at St. Joseph’s Church here in Niagara Falls, New York — a tradition that was carried on by her seven daughters and now her last remaining offspring, my Great Aunt Angelica, aged 96.

One of the remarkable things about this society is that it prayed for all the holy souls in purgatory — not just friends and family — but everyone and anyone confined there. The fact that my great-grandmother and her friends at St. Joseph’s found this an important apostolate speaks highly of their care for all souls — both here and hereafter.

For good or ill — make that for ill — since the Second Vatican Council we have seen a waning of parish-based societies, sodalities and confraternities. True, most parishes have a Knights of Columbus Council and at the very least an Altar and Rosary society — but the latter seem to be (in my limited experience) toned-down affairs.

However, such was not the case with St. Joseph’s Purgatorial Society. In any and all parades and or processions, they had a beautifully hand-sewn banner, and in the church itself was (and is) a statue of the Blessed Virgin Mary standing above the sharp, purgatorial flames while heads, hands, and outstretched arms reached up for Our Lady’s succor. The inscription on this large statue was in Italian and read something to the effect of “Immaculate Mary, Pray For The Holy Souls in Purgatory”.

Further, the members of this pious Society — who spent every day of the month of November in prayer for the dead, along with certain days of the year as well — wore a unique exterior badge/scapular reminding them of their duty to offer up prayers and mortifications for all the dead.

Every Nov. 2, the Purgatorial Society held a breakfast in the church hall to recall those who had gone to their eternal reward and, at that meal, our family’s bakery (founded in 1920), presented each pray-er with a loaf of bread in gratitude for their membership and prayers.

So as we end November, please remember those souls in purgatory who have no one to pray for them — and I’ll try to remember them as well.

(I write this in honor of my great-aunt Angelica Di Camillo, who has spent the better part of her long adult life praying for the holy souls in Purgatory.)