The Virgin motioned to Alphonse to kneel down 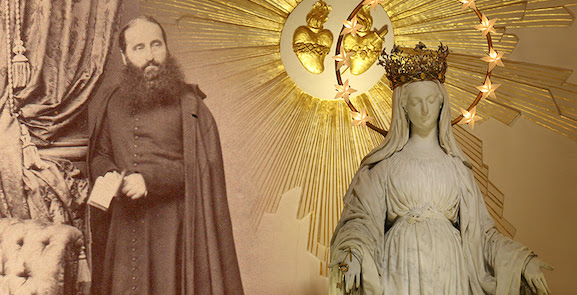 On January 20, 1842, the last day of his stay in Rome, Italy, a young and prominent French Jew and atheist, Alphonse Ratisbonne, encouraged by one of his friends from Strasbourg, France, entered the Church of Sant’Andrea delle Fratte. There the Virgin Mary appeared to him, her hands open and extended, motioning him to kneel. This apparition was officially recognized on June 3, 1842. Ratisbonne himself tells us what happened in those few minutes:

“I had only been in the church a short while when, all of a sudden, I felt totally uneasy for no apparent reason. I raised my eyes and saw that the whole building had disappeared. Only one side chapel had, if you will, gathered all the light. In the midst of this splendor, the Virgin Mary appeared standing on the altar. She was grandiose, brilliant, full of majesty and sweetness, just as she is on the Miraculous Medal. An irresistible force attracted me to her. The Virgin motioned to me to kneel down and nodded as if saying ‘very good!’ And although she did not say anything, I understood everything.”

Ratisbonne never could explain how, being in one of the lateral naves before the apparition, he was found in the other, since the central nave was obstructed. However, in face of the magnitude of the miracle of his conversion, this was but a detail.

The news of such an unexpected conversion, so fulminating and complete, immediately spread and caused a great commotion throughout Europe.

Pope Gregory XVI wished to meet the young convert and received him paternally. He ordered a detailed investigation with all the rigor required by canon law. The conclusion was that it was truly an authentic miracle.

Having taken the name Maria Alphonse at baptism, Ratisbonne chose to become a Jesuit and was ordained in 1847. After a while and at the suggestion of Blessed Pope Pius IX, he left the Jesuits and joined his brother Theodore in founding the Congregation of Our Lady of Sion, dedicated to the conversion of the Jews.
Father Theodore spread his congregation throughout France and England, while Father Maria Alphonse went to the Holy Land. In Jerusalem he bought a plot of land where the praetorium of Pilate had formerly stood. Here he established a house of the congregation. The two brothers died in 1884, both with the fame of exceptional virtues.

3 Responses to The Virgin motioned to Alphonse to kneel down