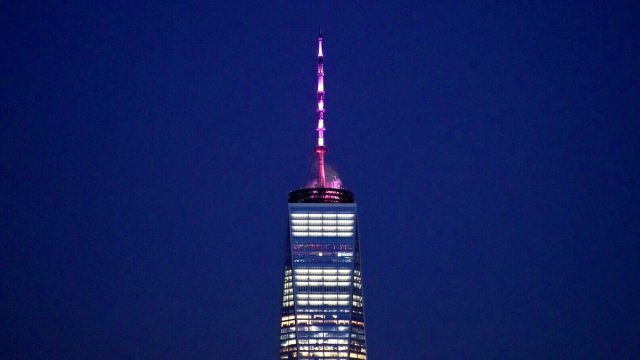 The mayor of a French town commissioned a statue of the rationalist Emile Zola and, intent on provocation, he ordered that the bronze for it be from the bells of a church. Similarly, Governor Andrew Cuomo chose to sign into law our nation’s most offensive abortion bill on the anniversary of the Roe v. Wade decision, to ecstatic applause in the state capitol. Then he ordered that the Empire State Building, the Freedom Tower, and the Alfred E. Smith Building in Albany be lit in pink. The ancient Caesars dressed in red as the emblem of victory; Cuomo drapes himself in pink.

Mark the ironies: The Freedom Tower is at the site of the memorial to the dead of 9/11, and listed on it are eleven “unborn babies” killed with their mothers. And Al Smith would have resigned rather than endorse infanticide.

In Orwellian “Newspeak,” just as a concentration camp was called a “Joycamp,” the killing of innocent unborn infants is sanctioned by a “Reproductive Health Act.” Now it is legal to destroy a fully formed baby one minute before birth and, should it survive a botched attempt to cut it up, there is no requirement to provide medical help. The abortionist does not even have to be a medical doctor.

The legislation was deferred over years by politicians who, if not paragons of empathy, were appalled by its excess. It has only passed because the Democrats now control both houses of the New York state legislature. Politics aside, the governor teased a religious question. Not only does he mention that he once was an altar boy, but he concluded the signing celebration by telling the legislators, “God bless you.”

Perhaps he is succumbing to the temptation that some of the senators of Rome detected as evidence of decadence: the apotheosis, or divinizing of emperors in an Imperial Cult complimentary to the traditional deities. Andrew Cuomo, over the objections of more than 100,000 petitioners, named the Tappan Zee replacement bridge in honor of his father. In the dark ages, there was a superstition that a bridge could only be safe if a sacrificial victim was buried in its foundation. There are many innocent bones that could be buried under the Mario Cuomo Bridge, and his son perpetuates the cult.

Doctor Edward Peters, one of our nation’s most venerable canon lawyers, has written: “Penal jurisdiction in this matter rests with the bishop of Albany (as the place where some or all of the canonically criminal conduct was committed, per Canon 1412), and/or with the archbishop of New York (as the place where Cuomo apparently has canonical domicile, per Canon 1408).”

These matters are beyond the ken or jurisdiction of a parish priest, but it is clear that it is not sufficient for Churchmen blithely to suppose that an adequate response to the massacre of innocents by the inversion of reason is nothing more than an expression of “profound sadness.”