Reflection for the 4th Sunday in Ordinary Time – Cycle C 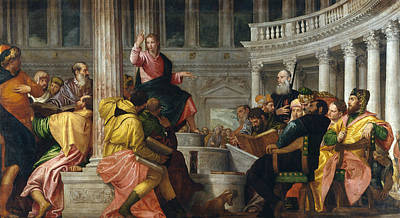 The word of the Lord came to me, saying:  Before I formed you in the womb I knew you, before you were born I dedicated you, a prophet to the nations I appointed you.  But do you gird your loins; stand up and tell them all that I command you.  Be not crushed on their account, as though I would leave you crushed before them; for it is I this day who have made you a fortified city, a pillar of iron, a wall of brass, against the whole land:  against Judah’s kings and princes, against its priests and people.  They will fight against you but not prevail over you, for I am with you to deliver you, says the Lord.

Brothers and sisters:  Strive eagerly for the greatest spiritual gifts.  But I shall show you a still more excellent way.  If I speak in human and angelic tongues, but do not have love, I am a resounding gong or a clashing cymbal.  And if I have the gift of prophecy, and comprehend all mysteries and all knowledge; if I have all faith so as to move mountains, but do not have love, I am nothing.  If I give away everything I own, and if I hand my body over so that I may boast, but do not have love, I gain nothing.  Love is patient, love is kind.  It is not jealous, it is not pompous, it is not inflated, it is not rude, it does not seek its own interests, it is not quick-tempered, it does not brood over injury, it does not rejoice over wrongdoing but rejoices with the truth.  It bears all things, believes all things, hopes all things, endures all things.  Love never fails.  If there are prophecies, they will be brought to nothing; if tongues, they will cease; if knowledge, it will be brought to nothing.  For we know partially and we prophesy partially, but when the perfect comes, the partial will pass away.  When I was a child, I used to talk as a child, think as a child, reason as a child; when I became a man, I put aside childish things.  At present we see indistinctly, as in a mirror, but then face to face.  At present I know partially; then I shall know fully, as I am fully known.  So faith, hope, love remain, these three; but the greatest of these is love.

Jesus began speaking in the synagogue, saying: “Today this Scripture passage is fulfilled in your hearing.”  And all spoke highly of him and were amazed at the gracious words that came from his mouth.  They also asked, “Isn’t this the son of Joseph?”  He said to them, “Surely you will quote me this proverb, ‘Physician, cure yourself,’ and say, ‘Do here in your native place the things that we heard were done in Capernaum.’”  And he said, “Amen, I say to you, no prophet is accepted in his own native place.  Indeed, I tell you, there were many widows in Israel in the days of Elijah when the sky was closed for three and a half years and a severe famine spread over the entire land.  It was to none of these that Elijah was sent, but only to a widow in Zarephath in the land of Sidon.  Again, there were many lepers in Israel during the time of Elisha the prophet; yet not one of them was cleansed, but only Naaman the Syrian.”  When the people in the synagogue heard this, they were all filled with fury.  They rose up, drove him out of the town, and led him to the brow of the hill on which their town had been built, to hurl him down headlong.  But Jesus passed through the midst of them and went away.

Jesus is the fulfillment of the Old Testament prophecy of Jeremiah.  The great prophets of the Old Testament were able to foresee, although probably without clarity. The Old Testament prophets were convinced that God’s Will is inevitable, intractable, and inviolable.  God will win in the end and His people will return to Him.  We need to look at our faith in this regard.  Do we really trust that God is acting in our world?  Do we really believe that God is more powerful than all of the evil forces that now seem to work in our world?

“There is nothing more powerful than an idea whose time has come” is a quote attributed to the great French poet and author Victor Hugo who wrote Les Miserables.  Jesus is more than a powerful idea. Jeremiah invites us to trust more deeply:  for him, a Savior will come.  For us, a Savior has come.  Nothing, especially no man, will stop this.

After John 3:16 which used to be displayed auspiciously in camera range in crowded sports stadiums, concerts, behind goal posts at professional and college football games, and behind clear Plexiglas basketball backboards at basketball games of all levels, these verses from First Corinthians are some of the most popular verses we see or hear today.  We hear them at weddings, reminders to the couple that love feels good, but it is hard work at times. They give us the path on which to walk today:  Love God and love all other people.  Serve God and serve others.  This letter gives us clear advice of what love means– and it does not sound like the love we hear about in our cable mini-series or read in eye catching tabloids as we check out our purchases at large box stores. This is a love that always seeks the good of the other– not my good nor my happy feelings.  It is sometimes going through the unimaginable, as the character Angelica sings about Alexander Hamilton in the musical Hamilton. Sisters and brothers, let us love the Lord and one another.  Faith, hope, love remain, these three; but the greatest of these is love.

The Gospel continues the story of the beginning of the public ministry of our Lord Jesus.  Jesus does the works that the prophets foretold.  By doing those works, He attracts little notice and a great deal of opposition.  Christians should prepare themselves for be ignored, overlooked, or marginally known.  In Pope Francis’ address to the U.S. Congress, Dorothy Day stood out as the only woman the Pope mentioned. Among Catholics, Day’s name is probably familiar, but to the broader public, her legacy isn’t quite as well-known. As for the opposition, it is not just angry at Him; it wants to kill Him!  Joyously, we can look ahead to his triumphal entry in Jerusalem, when so many of His followers believed Him.  Our ancestors exuded resilience to opposition; Catholic missionaries continue in this holy tradition today.

In the West today, Catholic missionaries from the global south seek to come to spread the Gospel to recalcitrant and fallen away Catholics.  Often, it is tricky for missionaries from poor countries to get visas to the West. Skeptical officials sometime suspect them of seeking a better life in this modern, industrialized, and politically stable world for themselves, rather than eternal life for others. Yet even as the West seems increasingly unwelcoming, the new missionaries will keep coming. The early evangelists braved stormy seas and the risk of being thrown to the lions. Their modern heirs will not be deterred by a few rude atheists or long waits for visas, according to a recent article in The Economist.

Prophesy is fulfilled.  Love conquers. And, in spite of the antagonism, Jesus prevails. Whatever people do or however they resist, God’s Will be done.  We can oppose God’s Will, and if we do it to the end, we will face the judgment.  In the end, God’s Will will be done at the cosmic level; we love and live our lives and pray for God’s mercy that we will be on the right side of His Will at the individual level.  The Cross of our Lord is a stumbling block and causes all kinds of problems for people who might want to believe.  The freedom of Jesus causes others to stop believing.  Those who want to keep everything under control and not let anything unusual happen cannot believe.  And you?  And me?  Can we believe?  Do we believe?  Are we ready to follow our Lord and die with Him?