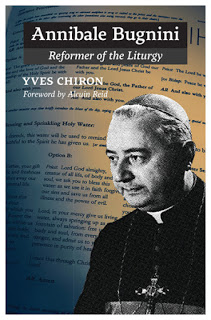 The CATHOLIC HERALD published an article a few days ago with revelations taken from Annibale Bugnini’s biography that are producing some strong repercussions on Catholic Media. These revelations describing the slapdash methods used by Bugnini for his “reforms” to the holy Liturgy have been rumoured and reported all along, although progressives refused to believe they mattered. Or perhaps they even hailed them! In fact these methods, and the Protestant influence he invited in, were firmly denounced by Archbishop Lefebvre at the time once the wool was removed from his eyes, and by many other orthodox Catholics too who were appalled at what they were witnessing. [I wrote about it HERE.]

Once more we have the proof that the making and forming of the ‘New Mass’ (the ‘Novus Ordo Missae’) had some very dubious origins.

A biography of Bugnini paints a startling picture

For Christmas I was given a copy of the newly translated biography of Annibale Bugnini, architect of the Novus Ordo Mass – and hero or éminence grise of the Council’s liturgical reforms, depending on your viewpoint. It is difficult not to tend towards the latter, though I don’t think the author intends it so.

Startling things emerge: many facts once dismissed as conspiracy theories because they were originally reported by those who opposed some reforms are here held to be historically accurate, perhaps the most notorious being the revelation that Eucharistic Prayer II was substantially composed in a Roman trattoria, since its authors were given only 24 hours for the task.

… I recently visited a religious house where I was told that plainchant is banned. The Constitution says it is to occupy “pride of place” in the Roman liturgy, but if you suggested reintroducing it you would be accused of wanting to “turn the clock back”. Yes, to the very point at which the Church said reform begins.

Ask for how to get to somewhere in rural Ireland and your interlocutor will reply, “Well, I wouldn’t start from here.” It is clear that the approach of the committees responsible for preparing and implementing the liturgical Constitution took a similar approach. Many of their minutes record discussion of radical innovations like Bugnini’s own unauthorised experiments from the 1940s, and several practices which would subsequently be introduced in the name of the Council. The discussion is followed by the request to omit them from the preparatory schema for the Council or postpone specifying details until afterwards, precisely because the measures were too radical to be agreed by the bishops.

Reading this makes me angry. Perhaps Lefebvre had a point inasmuch as he realised that when it came to the liturgy, the Council was sold a pup.

“A  trattoria is an Italian-style eating establishment, less formal than a ristorante, but more formal than an osteria. There are generally no printed menus, the service is casual, wine is sold by the decanter rather than the bottle, prices are low, and the emphasis is on a steady clientele rather than on haute cuisine.” (H/t to ‘Southern Orders’)

The HOLY MASS: From Holy Sacrifice to 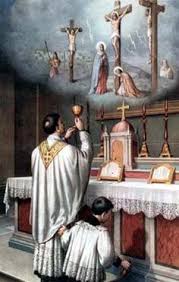 The Holy Mass is the central act of Catholic worship. As such, it is not surprising that the liturgical actions, gestures, and prayers must reflect the true Catholic Faith to a tee. In all its details, the Catholic Mass reflects what Catholics believe, and vice versa: What Catholics believe is reflected in the Holy Mass. It therefore follows that if someone were to change the liturgical actions or prayers of the Holy Mass, this would necessarily change or impact the belief of Catholics. A common Catholic adage is that the law of prayer is the law of belief: “Lex orandi, lex credendi.” Therefore, whenever changes were made to the Catholic Mass, these changes were minor and never substantial, and complete orthodoxy was always ensured so that the faithful would always have pure and sound doctrine in this principal act of worship to the Most Holy Trinity.

Excerpts from the writings of Archbishop Marcel Lefebvre:

In order to judge the dogmatic, moral, and spiritual worth of this reform, we must briefly recall the immutable principles of the Catholic Faith concerning the essence of our holy Mass. These propositions are “de fide divina catholica definita”—defined truths of Divine and Catholic faith. They are therefore dogmas, such that someone who did not believe them would by that very fact be outside the Church.

It is obvious that these three fundamental truths are—not to be severe in our judgment of the Novus Ordo—at least clearly weakened, and this we can easily prove whether by internal or external factors, that is to say, by an analysis of the Ordo itself; also, by what outsiders say about it; and, lastly, by the realities that flow from this reform. But it is especially by the internal proofs, that is to say, by studying the Novus Ordo itself, that we reach this conclusion.

1. The absence of sacrifice in the liturgy

It constitutes a diminution of what is the center of the Mass, of what the sacrifice of the Mass truly is.

2. Suppression of the propitiatory prayers

All the texts that very clearly affirm the propitiatory end, the essential end, of the sacrifice of the Mass have been removed. One or two faint allusions still remain, but that is all. This was done because the propitiatory end is denied by the Protestants.

3. A suppression inspired by Protestantism

The result, unfortunately, of the post-conciliar reforms has been to affect the notion of sacrifice, the notion of the Passion continued in the sacrifice of the Mass. Not that the innovators have denied it outright, but that they do not mention it, with the result that men forget it; they no longer think of it. Certainly, the authors of the new, post-conciliar liturgy have not denied the sacrifice of the Mass, but by the fact that they put so much emphasis on the table, the Eucharistic meal, and by omitting the term sacrifice, or at least by speaking of it only occasionally so that they can claim that they are not unaware of it, people stop believing in the virtue of Calvary.

4. Suppression of the gestures symbolizing the sacrifice

Moreover, to analyze the new rite it is necessary to consider not only the texts, but also all the rubrics and the new gestures that are required: the genuflections, the Signs of the Cross, the inclinations…and even the change in the objects. Thus, in the first Canon, all the Signs of the Cross have been suppressed!

5. The altar cross suppressed or relegated to the side

The crucifixes on the altars have also often been suppressed, or at least moved to the side of the altar. Consequently, there is not even a reminder of the Passion of Our Lord Jesus Christ for something that is the true, real reproduction of Our Lord’s sacrifice. The suppression or displacement of the altar cross betokens a diminution of the idea of sacrifice. The Church requires a crucifix on the altar; it must be there precisely because it reminds us of the sacrifice of Calvary.

The innovators no longer see in the Mass a propitiatory sacrifice, but we must always come back to that. We must always put the faithful at the foot of the Cross, before the sacrifice of Our Lord. This must be our recurrent theme. The Mass is a sacrifice. A sacrificial action is effected, and we partake of the Victim. It is not a “sharing of bread”; it is not a “sharing of the word.”

People want nothing to do with the Cross of Our Lord Jesus Christ. They want nothing to do with His sacrifice, because His sacrifice reminds us that we must sacrifice ourselves, that to have life we must die to our sins, and men who seek their pleasures and satisfactions cannot stand to see it, hear it, or understand it. They want no part of the Cross. That is why so many crucifixes have disappeared in our day.

6. The Mass celebrated facing the people in the Roman basilicas

The priest turns towards the crucifix for the offering of the sacrifice. Thus the Mass celebrated facing the people takes away this notion of sacrifice. Some argue that at Rome the altars on which the pope celebrates are altars facing the people.[38] That is true, and yet it is not true, because the pope celebrates with his entire chapter, which is behind him. Thus, when the pope would celebrate, he did not turn towards the notables present—all the priests, and cardinals, and his entire court. He turned towards the faithful, but he was at such a distance that his face could scarcely be seen. On all these altars there was a crucifix, candelabra, and other ornamentation that created a separation. And then, he celebrated facing Our Lord Jesus Christ. It was not in order to celebrate Mass facing the people that he was turned towards the people, but it was because of the orientation of the basilica.[39]

7. The sacrifice of the Mass is no longer visibly signified in the churches

In the beautiful basilicas that our ancestors built, one can see that the altar is truly the heart of the edifice. You have the building’s main nave and the transept representing the Cross of Our Lord, and the altar is in the place of Our Lord’s heart. Having lost the notion of sacrifice in the Mass, the innovators now create any kind of building for a church. They construct some kind of hall, and a multi-purpose hall at that, suitable for all kinds of events, and there they “do the Eucharist,” as they call it. A table can be put anywhere. It isn’t necessary to have a building that represents the Cross. It has no meaning at all.

14 The Council of Trent enounces this condemnation: “If anyone says that the sacrifice of the Mass is only one of praise and thanksgiving, or that it is a mere commemoration of the sacrifice consummated on the Cross, but not one of propitiation…: let him be anathema” (Session 22, Canon 3, DS 1753 [Dz. 950]). Propitiation restores man to the Divine friendship (renders God “propitious”) by the remission of sins.