The Church at the Service of the Neo-Pagan Agenda 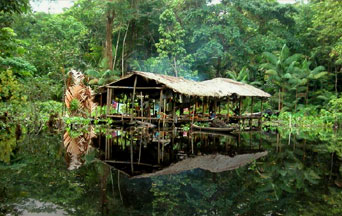 The Church at the Service of the Neo-Pagan Agenda

The working document (Instrumentum laboris) for the coming Extraordinary Assembly of the Synod of Bishops on the Amazon totally opens the gates of the Magisterium to Indian Theology and Eco-theology, two Latin American derivatives of liberation theology (LT). After the collapse of the Soviet Union and the failure of “real socialism,” the liberation theology advocates in true Marxist fashion attribute the historical role of revolutionary force once represented by the workers to indigenous peoples and nature.

Like LT, the just-released Instrumentum laboris does not base its musings on the Revelation of God in the Bible and Tradition. God is revealed by the supposed “oppression” of the Amazon region by modernity. Thus, from a simple geographical and cultural area, the Amazon region becomes a “privileged interlocutor,” a “theological place,” “an epiphanic place” and a “source of God’s revelation (No. 2, 18 and 19).

From a theological point of view, the Instrumentum laboris recommends the teaching of Indian Theology “in all educational institutions” for “a better and greater understanding of indigenous spirituality.” It invites the faithful to “take into consideration myths, traditions, symbols, knowledge, rites and original celebrations” (No. 98). It repeats all the postulates of Indian theology throughout the document. Thus, the “seeds of the Word” are present not only in the aboriginal people’s ancestral beliefs, but they have “grown and given fruit” (No. 120) so that the Church, instead of her traditional evangelization that seeks conversion, must limit herself to “dialoguing” with Indians since “the active subject of inculturation are the indigenous peoples themselves” (No. 122).

In this intercultural dialogue, the Church must also enrich herself with clearly pagan and/or pantheistic elements of beliefs such as “faith in God the Father-Mother Creator,” “relations with ancestors,” “communion and harmony with the earth” (No. 121) and connection with “the various spiritual forces” (No. 13). Not even witchcraft is sidelined by this “enrichment.”

According to the document, “The richness of the flora and fauna of the forest contains real ‘living pharmacopeias’ and unexplored genetic principles” (No. 86). In this context, “Indigenous rituals and ceremonies are essential for integral health because they integrate the different cycles of human life and nature. They create harmony and balance between human beings and the cosmos. They protect life from the evils that can be caused by both humans and other living beings. They help to cure diseases that damage the environment, human life and other living beings” (No. 87).

On the ecclesiological level, the Instrumentum laboris is a real earthquake that undermines the Church’s hierarchical structure given by Divine mandate. In the name of “incarnation” in the Amazon culture, the document invites the faithful to reconsider “the idea that the exercise of jurisdiction (power of government) must be connected in all areas (sacramental, judicial, administrative) and permanently to the Sacrament of Order” (No. 127). Thus, the Synod’s working document inconceivably calls into question a doctrine of Faith that makes the distinction in the structure of the Church between clergy and laity. This truth has been affirmed since the First Council of Nicaea and is based on the essential difference between the common priesthood of the faithful and the ministerial priesthood of clerics. The latter is rooted in the apostolic succession and endowed with sacred power.

Along with this watering down of the Catholic priesthood into something similar to a Protestant pastor, there comes a call to reconsider the obligatory nature of celibacy. Even worse, the document calls for identifying what kind of “official ministry” can be conferred on women (§ 3). Indeed, Cardinal Joseph-Albert Malula, from Zaire, and Most Rev. Samuel Ruiz, of the Diocese of Chiapas, must be stirring in their graves upon seeing that the projects they tried to achieve in life (which the Vatican quickly rejected) are now proposed by a Synod, which according to its organizers, has a certain universal dimension.

From an ecological point of view, the Instrumentum laboris represents the Church’s acceptance of the deification of nature as promoted by United Nations conferences on the environment.

Already in 1972, official UN documents claimed that man has mismanaged natural resources mainly due to “a certain philosophical conception of the world.” While “pantheistic theories … attributed part of the divinity to living beings … scientific discoveries led to … a kind of desacralization of natural beings.” This concept is best justified by the reaffirmation “in the Judeo-Christian conceptions according to which God created man in his image and gave him the earth to subdue.” Conversely, the UN said, the practice of ancestor worship “constituted a bulwark for the environment, since trees or watercourses were protected and revered as a reincarnation of ancestors” (Aspects éducatifs, sociaux et culturels des problèmes de l’environnement et questions de l’information, UN General Assembly, Stockholm, June 5-6 1972, A/CONF.48.9, p. 8 & 9).

In the closing speech of the Eco 92 Earth Summit conference in Rio de Janeiro, the then-UN Secretary-General, Boutros Boutros-Ghali declared that “To the ancients, the Nile was a god to be venerated, as was the Rhine, an infinite source of European myths, or the Amazonian forest, the mother of forests. Throughout the world, nature was the abode of the divinities that gave the forest, the desert or the mountains a personality which commanded worship and respect. The Earth had a soul. To find that soul again, to give it new life, that is the essence of Rio [the Intergovernmental Conference].” (A / CONF.151 / 26, vol. IV, p. 76).

This neo-pagan UN agenda is now proposed by a Synodal Assembly of the Catholic Church!

Citing a document from Bolivia, the Instrumentum laboris states that, “the forest is not a resource to be exploited, it is a being or more beings with which to relate” (No. 23). The document continues by stating that “The life of the Amazon communities still unaffected by the influence of Western civilization [sic], is reflected in the beliefs and rituals regarding the action of spirits, of the divinity – called in so many names – with and in the territory, with and in relation to nature. This cosmo-vision is summarized in the ‘mantra’ of Francis: ‘everything is connected’” (No. 25).

From the socio-economic point of view, the Instrumentum laboris is an apology for communism, disguised as “communitarianism.” Moreover, it is the worst form of communism: the collectivism of small communities. According to the document, the aborigines’ experience of “good living” (sumak kawsay) assumes that “there is an intercommunication between the whole cosmos, in which no one excludes or is excluded.” The explanatory note on the indigenous word refers to a declaration by various indigenous entities titled “The Cry of the Sumak Kawsay in Amazonia.” The statement claims that the word “is an oldest and newest Word” (with a capital W signifying a Divine Revelation) which proposes “a communitarian lifestyle with one and the same FEELING, THINKING AND ACTING” (capital letters also from the original).

This phrase calls to mind the 1976 denunciation of Plinio Corrêa de Oliveira that denounced indigenous tribalism as a new and even more radical stage of the Anarchist Revolution:

“Structuralism sees in tribal life an illusory synthesis between the height of individual liberty and of consentaneous collectivism, in which the latter ends up devouring liberty. In this collectivism, the various “I’s” or the individual persons, with their intelligence, will, and sensibility, and consequently with their characteristic and conflictual ways of being, merge and dissolve in the collective personality of the tribe, which generates one thought, one will, and one style of being intensely common to all.”

The Instrumentum laboris is nothing short of an invitation for humanity to take a fatal step towards the final abyss of the anti-Christian Revolution.

This entry was posted in Uncategorized and tagged Amazon Synod (2019). Bookmark the permalink.