In the Aftermath of the Mass Killings in the US, a few thoughts.

Comment: In an ideal world there would be no need to fear we may be gunned down as we go about our lives. There would be no discussion on whether we have the right, or not, to carry weapons with which to defend ourselves and our loved ones from hate-filled murderers who shoot, stab and kill at random. But this is not an ideal world, as we all well know. At the same rate as greed, selfishness, intolerance and aggressive pride increase, so do evil acts of mass killings and violence explode all around us.

Whilst the rest of the world (notably Europe) blames the USA for the ongoing mass shootings of innocent bystanders by crazed assassins due to its tolerant gun laws, perhaps we should take a look at the “beam in our own eye” first. Nor should we forget these important points below when considering if we should continue to allow ourselves and our families to be vulnerable targets to any would-be assassin:

“36 But they said: Nothing. Then said he unto them: But now he that hath a purse, let him take it, and likewise a purse; and he that hath not, let him sell his coat, and buy a sword.”

“2263 The legitimate defence of persons and societies is not an exception to the prohibition against the murder of the innocent that constitutes intentional killing…..

2264 Love toward oneself remains a fundamental principle of morality. Therefore it is legitimate to insist on respect for one’s own right to life. Someone who defends his life is not guilty of murder even if he is forced to deal his aggressor a lethal blow….

2265 Legitimate defence can be not only a right but a grave duty for one who is responsible for the lives of others. The defence of the common good requires that an unjust aggressor be rendered unable to cause harm. For this reason, those who legitimately hold authority also have the right to use arms to repel aggressors against the civil community entrusted to their responsibility.”

(3) Gun prohibition in Europe, for instance, has done nothing to put a stop to rising crimes of extreme violence and murders in our cities in recent times. (Example: Last year crime rates for such acts of violence in London, notably knife attacks, surpassed that of New York, and continue to increase!)

(4) The crux of the matter is… Donald Trump, guns, immigrants, racism, etc., in fact, everyone and everything is getting blamed for the recent killings except the real culprit – ungodliness. Yet have we not also abandoned God and our Christian heritage in Europe through our making of increasingly ungodly laws and our worldliness? Without the cornerstone of Christendom on which “the house” (the West) was built, strong and upright, it will corrode, topple, and eventually fall. Before our very eyes!

Why Is America Killing Itself? God Knows!

by Michael J. Matt, Editor at THE REMNANT

In the aftermath of the El Paso shooting. (Photo: Ivan Pierre Aguirre)

It’s mourning in America again.  Two mass shootings within 24 hours over the weekend—one in Texas and the other in Illinois. The death toll has risen to 31, with dozens more in hospital.

Murdered Americans lying in the streets mean one thing to too many unprincipled American politicians: A political opportunity.

Democratic presidential hopeful, Beto O’Rourke, didn’t miss a beat.  Hours after the shooting in El Paso, he took it upon himself to unleash a televised tirade against Donald Trump—the “racist” who, according to O’Rourke, is personally responsible for the murder of 20 Americans in El Paso:

EDITOR’S UPDATE: Since we posted this article yesterday, the following video was taken down from YouTube. It is my hope that this might mean Beto has had a run-in with the Secret Service in the wake of his inflammatory and dangerous rhetoric against the President of the United States.  Here in a nutshell, is what Beto said, as summed up by Patrick Buchanan in his excellent new article “Exploiting Massacres to Raise Poll Ratings”:

Railed Beto, Trump “is a racist and he stokes racism in this country … and it leads to violence. … We have a president with white nationalist views in the United States today.” He called Trump’s language about Mexican immigrants “reminiscent of something you might hear in the Third Reich.” Asked on Sunday by CNN’s Jake Tapper if he believes the president is a “white nationalist,” Beto eagerly assented: “Yes, I do.”

If dangerous rhetoric incites violence, one wonders why this dog whistle to every psycho Trump hater with a deer rifle didn’t land this irresponsible buffoon in jail.

I guess anything goes on CNN these days. They’ve been broadcasting a 24-hour rant against Trump and the NRA ever since the shootings. It’s almost as if this is tailor made for them, since the deranged shooters in both cases were white. They say they care about the victims of gun violence and I’m sure some of them do, but they also seem positively fixated on the skin color of the shooter.

For them, these brutal acts of senseless violence seem to serve a political agenda, which may explain the comparative silence over at CNN when a rash of shootings in Chicago over the very same weekend left 66 shot and 12 dead.

Do all black lives matter to CNN, or just those taken by white killers?

Some 260 murders in Chicago so far in 2019, and nothing from CNN or Beto about the rise of hate crimes in the Windy City and how it’s all Trump’s fault.  Perhaps this is because in the Chicago massacres the black-to-white shooter/victim ratio doesn’t fit their racist narrative.

Regardless, these acts of violence are more than deplorable. And I disagree with President Trump when he suggests mental illness is the problem. Something far worse than any illness of the mind would seem to be at work here, and it has little to do with guns and everything to do with a sickness of the soul. 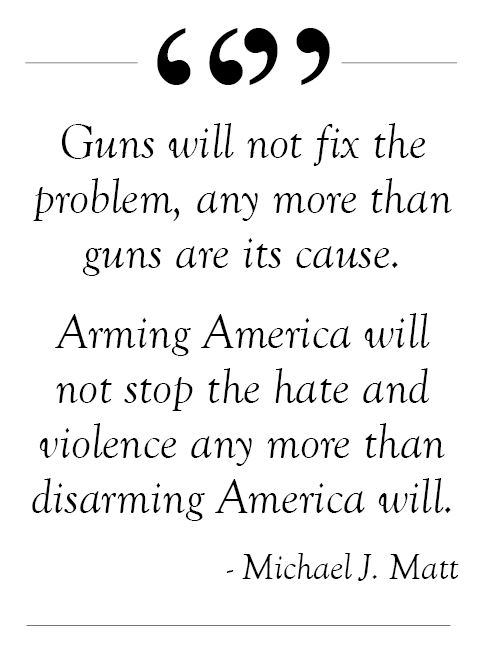 I have been a gun owner and a hunter all my life. I have a permit to carry. I worked as an armed guard for a couple of years out of college and carried a gun to work every day. I believe in the Second Amendment.

That said, guns will not fix the problem, any more than guns are its cause.

Fifty years ago, everyone had easy access to guns. We got them as gifts at Christmas and birthdays. They were part of our lives, our culture, our way of life—and yet nobody was out shooting up schools or slaughtering innocent people at Wal-Mart.

Well, that’s the question every serious journalist and commentator should be asking. But they’re not. Why not? Because they’re not allowed to bring God or logic into the national conversation, at least not over at CNN.

Blame the guns. Blame the president. Blame the cops. But never ask the obvious questions:

Why did gun violence explode into our lives only after God had been banished from public schools?

Why did gun violence explode into our lives only after abortion was legalized? (In the state of Illinois alone, nearly 40,000 abortions take place every year; that’s an average of over 100 babies per day.)

Again, don’t ask that question. Half the country will call it hate speech and the other half will dismiss it as the unenlightened babble of the Dark Ages. We’re a progressive society. Can’t you tell?

Broken families, war on morality, abortion, ubiquitous pornography, violent video games, violent movies, violent music, banishing God — none of this has anything to do with gun violence in America. Nothing! Nada! And to suggest otherwise is probably against the law or will be soon enough.

Just blame the guns, play the race card and duck your head.

This entry was posted in Uncategorized and tagged Abortion, CNN, Donald Trump, Gun control, Rights of self-defence, The Remnant. Bookmark the permalink.

1 Response to In the Aftermath of the Mass Killings in the US, a few thoughts.