Comment  This is a reblog from the website of our old team-mate and friend, Brother Burrito. It is an account of an event that happened to him some time ago as a young doctor, and the challenging circumstances he had to confront in which the “Hand of God” can be clearly seen. It is also an amazing story of the love, courage and sacrifice of a young Irish mother who put the life of her unborn baby before her own. 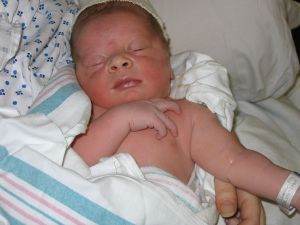 It is not uncommon for middle grade anaesthetists to be overwhelmed by simultaneous calls upon their time, especially out of hours. Thus it was in the early 90s that I was busy in A&E with some critically ill punter who needed admission to ITU, when I got urgently bleeped to labour ward for a top-urgent caesarean section.

Such cases are always of the highest priority. The mother, the baby, or both are at risk of losing their lives, or suffering life-long disability in consequence. However, I couldn’t just leave the super-sick guy in the resus’ room to take his chances with the very junior doctors present there. What was I to do?

My junior colleague was busy in theatre, and was not experienced enough to relieve me anyway. My Consultant was 20 minutes away. I let labour ward know that it would be at least 20 minutes until I got there, and that they should move the mother into theatre and prep for immediate operation. I dispatched my technician ahead of me to get everything ready for a rapid sequence induction of general anaesthesia. Meanwhile, I awaited the arrival of my boss, pacing up and down like an expectant father.

She arrived running. Very little time was wasted on hand-over, thankfully. I really had to be elsewhere. I scooted out of the casualty department, crossed two car parks, negotiated some builder’s shuttering and the obstetric block’s security door, then rode up four floors in the lift. I still had to run 3/4 of the way around the labour ward floor to get to the  theatre, and then I saw what I saw.

A caesarean section operation was in progress: the mother was supine upon the operating table, screaming and sobbing. The baby was screaming too, but healthily, lying upside down upon its resuscitaire, with a paediatrician in attendance.  Two surgeons and a scrub nurse were standing by the mother’s lower abdomen, and a surgical pack was being firmly pressed into the wound there.

The most obviously wrong thing about this picture was the presence of a man, dressed in the style of Bob the builder, whose unconscious body was slumped insensate over the mother’s chest, with his arms dangling to the floor.

I must admit to being a bit surprised by all of this.

The seemingly seven foot tall African surgeon, of very dark skin and a gleaming pearly-white smile let me know the score with his kindly deep bass voice (and I paraphrase from memory):

“This mother was so concerned for the well-being of her unborn child that she demanded that I perform the caesarean without anaesthetic, which I did. Her husband held her down, in accordance with her wishes. I infiltrated local anaesthetic into the wound as I went, but there was not perfect analgesia.  I delivered Baby safely, but have since awaited your arrival”.

This was a scenario I had never encountered before, nor since.

The only practical option then was to put mum to sleep and let the operation be finished safely and well. The first step was to remove her husband’s prostrate body from across her ribcage so that she could breathe properly. We placed his fainted form upon the floor in the recovery position and tasked a spare midwife to recover him.

Then I did the needful. Mum woke up about half an hour later in the usual pain and confusion that follows an operation under general anaesthetic.

I told her about her healthy baby son, and her eyes lit up joyously.

What I didn’t say was how I had just witnessed the greatest possible act of courage by a woman: She had been willing to sacrifice herself, her comfort and her very life, for the sake of her unborn child.

This is a true story, and I am willing to endure torture in defence of its veracity. So much nonsense is bandied about nowadays about how little worth an unborn child has. This mother’s practical witness demonstrates how much hogwash that presumed worthlessness is.

The mother and father were both Irish Catholics. The surgeon was a Ghanaian Catholic too. No coincidence, I suggest.

This entry was posted in Uncategorized and tagged Catholic Spirit, Life issues, Sacrifice. Bookmark the permalink.