Angel of God, My Guardian Dear 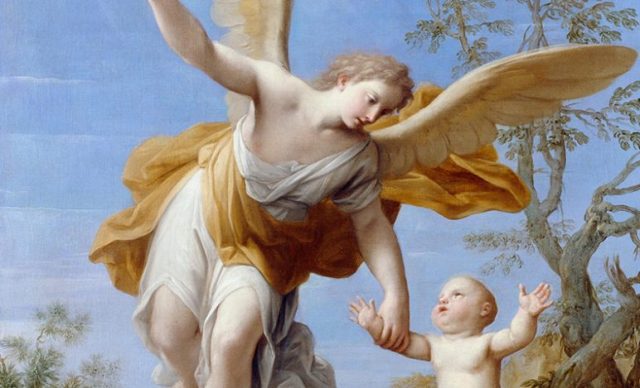 THE SPIRITS WHO GUARD US

Today is a very special day: for we honor our holy and powerful guardian angels. There are many testimonies of holy saints, such as Saint Gemma Galgani and the great Saint Dominic who were favored with a particular ability to converse and interact with their angel guardians.

But given the assault which is occurring to our priests, especially at this Synod, perhaps it would profit us to recount the lovely story of Saint Thomas Aquinas, which we take from  “All About The Angels”, by Father Paul O’Sullivan, made available by Mariann Bartold’s KIC Publishing.

Saint Thomas Girded by Angels with the Cincture of Purity

When St. Thomas Aquinas, who came of a very noble and illustrious family —royal blood flowed in his veins—joined the Dominican Order, his family was furious at his action. His brothers, who were officers in the army of Emperor Frederick, seized him and put him in prison in one of the family castles.

Here they did their best to persuade him to leave the Order and cast off the white habit, a course which he calmly but firmly refused to adopt. His captors then tore the habit from his shoulders and threw the pieces with contempt on the floor. The Saint quietly picked up the fragments of his habit and folded them reverently. The two brothers then planned a truly diabolical method of attack. They contrived to introduce into the prison a beautiful but abandoned woman, with the promise of a large reward if she could succeed in shaking the virtue and resolution of their brother. The very first words of the treacherous visitor opened the eyes of Thomas to a sense of his danger.

He shuddered, looked up to Heaven, and seizing a blazing brand from the hearth, drove the wretched creature from the room. Then, trembling at the thought of the danger he had escaped, he traced a cross on the wall with the smoldering brand and, kneeling down, made an act of intense gratitude for his deliverance and a fervent consecration of his whole being to God.

“We have come from God”

While thus praying, he fell into an ecstatic sleep, during which two Angels from Heaven appeared lo him, and girded him with a miraculous cord, saying at the same time these words: “We have come from God, to invest thee with the girdle of perpetual chastity. The Lord has heard thy prayer, and that which human frailty could never merit is assured to thee by the irrevocable gift of God.”

This was no dream, but a reality, for the Angels girded him so tightly that the pain awoke St. Thomas from his ecstasy and made him utter an involuntary cry. Some servants ran to the spot, but Thomas, wishing to hide the favor he had received, dismissed them courteously and kept his secret till he was on his deathbed. He then revealed it to his friend and confessor, Brother Reginald, and declared that from that time, the spirit of darkness had never been suffered to approach his person. The girdle was worn by the Saint till his death and is still preserved in the Dominican Convent of Chieri!

The Virtues most loved by the Angels

The virtues in men that please the Angels most are purity, humility and love of God, and these virtues were most eminent in St. Thomas. No wonder then that he attracted the love and affection of these blessed spirits, about whom he has written so marvelously that some think that the Angels themselves came to reveal to him the secrets of their angelic natures. It is only natural to think so since, as they are desirous of helping all their clients who call on them, they would have been much more eager to help him who has for so many reasons been called the Angelic Doctor and who labored so successfully for the Church. (Fr. Paul O’Sullivan, “All about the Angels” . KIC. Kindle Edition)

Remember – Our Lady needs us to obey:  First Saturdays of Reparation, daily rosary, at least 5 mysteries, wear her brown scapular and live your Total Consecration to her Immaculate Heart, offering daily duties in reparation and for the conversion of poor sinners.

1 Response to Angel of God, My Guardian Dear