What’s happening to Catholics in China? 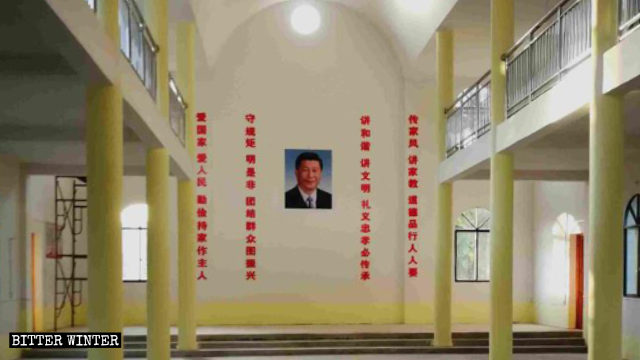 The Vatican changed its stance toward the Church’s presence in China.  What fruits have come from this change?

The following piece has lots of photos at the original page, which you can visit.

Places of worship refusing to be controlled by the state are being shut down, while government-run churches are used to worship the Chinese Communist Party.
by Tang Zhe

A Catholic Church in Ji’an, a prefecture-level city in the southeastern province of Jiangxi, was built this year at the cost of more than one million RMB (over $ 140,000), which had been raised by believers. It was named “The True and Original Source of the Universe” (萬有真原), a reference to the name inscribed in 1711 on a plaque the Kangxi Emperor (Xuanje, 1654–1722) donated to a Catholic church in Beijing. Not long after it opened its doors, the church became the target of the local government’s persecution.

In late September, local officials ordered the congregation to paint over the sign with the name of the church, replace it with “Follow the Party, Obey the Party, and Be Grateful to the Party,” and display the national flag at the entrance.

What has hurt the congregations the most was the removal of a painting of the Virgin Mary with the Christ Child, later discarded into a dark corner of the church. Instead, a portrait of president Xi Jinping was hung in the center of one of the walls, surrounded by propaganda slogans on both sides.

A few days later, officials confiscated the keys to the church and locked all its doors and windows. The congregation lost their place of worship.

The same month, a Catholic meeting venue that is not part of the Chinese Patriotic Catholic Association in Jiangxi’s Poyang county was ordered to cease religious activities. Local officials threatened to revoke retirement pensions of elderly congregation members if another meeting were to be held. The church’s cross, a painting of the Virgin Mary, and religious couplets were removed, and portraits of Xi Jinping and Mao Zedong were displayed instead.

May God help our brothers and sisters.

This entry was posted in Uncategorized and tagged Catholic Church in China, Christian Persecution. Bookmark the permalink.

11 Responses to What’s happening to Catholics in China?