Miraculous Medal: Are You Wearing Yours? #RueduBac 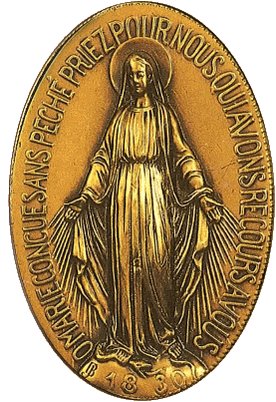 From Rorate Caeli:
Along with the Brown Scapular, another significant item Catholics should wear is the Miraculous Medal. From the Catholic encyclopedia:

“The devotion commonly known as that of the Miraculous Medal owes its origin to Zoe Labouré, a member of the Daughters of Charity of St. Vincent de Paul, known in religion as Sister Catherine [Note: She was subsequently canonized], to whom the Blessed Virgin Mary appeared three separate times in the year 1830, at the mother-house of the community at Paris. The first of these apparitions occurred 18 July, the second 27 November, and the third a short time later.”

On the second occasion, Sister Catherine records that the Blessed Virgin appeared as if standing on a globe, and bearing a globe in her hands. As if from rings set with precious stones dazzling rays of light were emitted from her fingers. These, she said, were symbols of the graces which would be bestowed on all who asked for them. Sister Catherine adds that around the figure appeared an oval frame bearing in golden letters the words “O Mary, conceived without sin, pray for us who have recourse to thee”; on the back appeared the letter M, surmounted by a cross, with a crossbar beneath it, and under all the Sacred Hearts of Jesus and Mary, the former surrounded by a crown of thorns, and the latter pierced by a sword.

At the second and third of these visions a command was given to have a medal struck after the model revealed, and a promise of great graces was made to those who wear it when blessed. After careful investigation, M. Aladel, the spiritual director of Sister Catherine, obtained the approval of Mgr. de Quelen, Archbishop of Paris, and on 30 June, 1832, the first medals were struck and with their distribution the devotion spread rapidly.

One of the most remarkable facts recorded in connection with the Miraculous Medal is the conversion of a Jew, Alphonse Ratisbonne of Strasburg, who had resisted the appeals of a friend to enter the Church. M. Ratisbonne consented, somewhat reluctantly, to wear the medal, and being in Rome, he entered, by chance, the church of Sant’ Andrea delle Fratte and beheld in a vision the Blessed Virgin exactly as she is represented on the medal; his conversion speedily followed. This fact has received ecclesiastical sanction, and is recorded in the office of the feast of the Miraculous Medal.

In 1847, M. Etienne, superior-general of the Congregation of the Mission, obtained from Pope Pius IX the privilege of establishing in the schools of the Sisters of Charity a confraternity under the title of the Immaculate Conception, with all the indulgences attached to a similar society established for its students at Rome by the Society of Jesus. This confraternity adopted the Miraculous Medal as its badge, and the members, known as the Children of Mary, wear it attached to a blue ribbon. On 23 July, 1894, Pope Leo XIII, after a careful examination of all the facts by the Sacred Congregation of Rites, instituted a feast, with a special Office and Mass, of the Manifestation of the Immaculate Virgin under the title of the Miraculous Medal, to be celebrated yearly on 27 November by the Priests of the Congregation of the Mission, under the rite of a double of the second class. For ordinaries and religious communities who may ask the privilege of celebrating the festival, its rank is to be that of a double major feast.

A further decree, dated 7 September, 1894, permits any priest to say the Mass proper to the feast in any chapel attached to a house of the Sisters of Charity.