The TLM and Catechesis 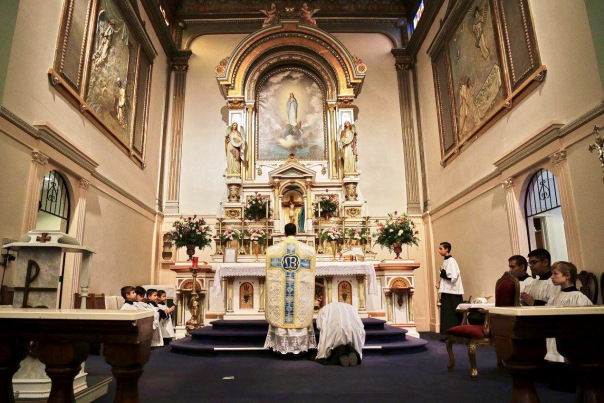 The Editor of the online journal First Things, has taken to attending the Traditional Latin Mass. In the final part of a long editorial, he explains what he sees as the pros and cons of the two forms of Mass. The article is interesting and perceptive, but I would like to take up a couple of his observations, with which I disagree—while agreeing with much else. These are the things he says about the capacity of each form to convey the message of the gospel, which I will deal with in this article, and their potential to act as centers of community, which deserves separate treatment.

On the first issue Reno says, of the older form:

It ­presumes a well-catechized congregation. By contrast, the use of the vernacular, the more fulsome lectionary, and the clear articulation by the priest of all the elements of the liturgy make the Ordinary Form more effective as a means for inculcating into the faithful the basic teachings of the Church about the nature of God and the role of Christ as the sacrament of our salvation.

At one level, Reno’s assertions seem undeniable. If the prayers and readings are in one’s own language, their message will be easier to grasp, right? Well, not so fast.

When Communion in the hand was permitted, bishops were told by the Congregation for Divine Worship: ‘it is, above all, necessary that an adequate catechesis prepares the way so that the faithful will understand the significance of the action and will perform it with the respect due to the sacrament. The result of this catechesis should be to remove any suggestion of wavering on the part of the Church in its faith in the eucharistic presence.’

When females were allowed to serve at the Altar, the same Congregation had a parallel worry, insisting that it ‘must be clearly explained to the faithful’, to wit, that ministries open to women are very different from ordained ministries, something which may be far from obvious.

The Congregation was also worried that the sight of lots of lay people bustling about with their ministries at Mass could imply that everyone should be doing something. It begged that ‘catechetical instruction should strive diligently to correct those widespread superficial notions and practices often seen in recent years in this regard.’

Again, should the Faithful draw the theological conclusion apparently indicated by the Reception of Holy Communion under Both Kinds, that reception of the Chalice adds something to reception of the Host? The Congregation pleads that they be headed off from any such conclusion. How? The practice should be ‘preceded and continually accompanied by proper catechesis regarding the dogmatic principles on this matter laid down by the Ecumenical Council of Trent.’

In each case, the fear was that a practice would encourage error, which would have to be countered by a special effort of preaching and formation. In other words, the liturgical practice could potentially form a kind of counter-catechesis.

And that is to say nothing about practices which are contrary to liturgical law. Pope John Paul II was stating the obvious when he observed that ‘in various parts of the Church abuses have occurred, leading to confusion with regard to sound faith and Catholic doctrine concerning this wonderful sacrament.’

Readers can judge for themselves whether the Ordinary Form consistently gets well-catechized congregations. At the Extraordinary Form, however, the liturgy itself can act as a form of catechesis.

The great reverence of the priest and of the other Faithful towards the Blessed Sacrament conveys with great eloquence the teaching, which must enter ones very bones, and not just be accepted as a dry formula, that Our Lord is truly present there. Pope Benedict XVI said that the reception of Holy Communion on the tongue marks the Real Presence with ‘an exclamation point’.

Similarly, the repeated confessions of sinfulness, of the Faithful but particularly of the priest, teaches the congregations very vividly our need for forgiveness and grace, and counters a facile clericalism which views the clergy as sinless.

Examples could be multiplied, but most important of all is perhaps the way the older Mass shows us how to pray. It teaches us to unite our prayers interiorly, in silence, to the great prayer of the Mystical Body of Christ, the Church, which is the perfect and acceptable prayer.

Mr. Reno might like to reflect on why the older Mass has, as he goes on the say, ‘an other-worldly allure that might attract unbelievers’. What does the Extraordinary Form communicate to them? It communicates precisely the message of the Gospel.