The new book, From The Depths Of Our Hearts, has really freaked out some people on the left, including the papalotrous.

On my flight home the other day, I wrote:

I suspect the reaction of the papalotrous is partly due to their opposition not only to celibacy for priests but their opposition to any sort of sexual control. I can’t shake the suspicion that they think that if priestly celibacy isn’t taken down, then it will be much harder to force a change to the CCC on homosexuality. They have to break the nuptial connection of priest and Church in order to weaken the ends of marriage between one man and one woman. Communion for unrepentant adulterers was a step in the right direction when it comes to the nuptial character of Christ and the Church and the Eucharist. Now they have to bust the priesthood down too.

Here is something that had to happen.

(CP&S: Cardinal Sarah sent out three messages via Twitter in French. These can be viewed on Fr Z’s site in addition to this English translation)

Rendering of the three tweets together:

Because of the incessant, nauseating and dishonest controversies that haven’t stopped since the beginning of the week concerning the book ‘From The Depths Of Our Hearts’, this evening I met with Pope Emeritus Benedict XVI.

With Pope Emeritus Benedict XVI we have been able to certify how there is no misunderstanding between us. I came out very happy, full of peace and of courage from this beautiful meeting.

I call upon you to read and to meditate on “From The Depths Of Our Hearts”. I warmly thank my editor, Nicolas Diat, as well as the publisher Fayard, for the precision, probity, seriousness, and professionalism which they have shown. Have a really good read!

So, Card. Sarah met with Benedict.  It seems that Benedict wasn’t deceived.

However, those who hate the content of this book, such as the papalotrous Austen Ivereigh wrote today:

Benedict’s secretary has expressly & repeatedly asked for B not to be billed as co-author and insists B did not co-write intro and conclusion. Yet @mabrumley @IgnatiusPress just ignore him. A Catholic publisher dismissing a 92yo former pope’s wishes and requests? #BraveNewWorld 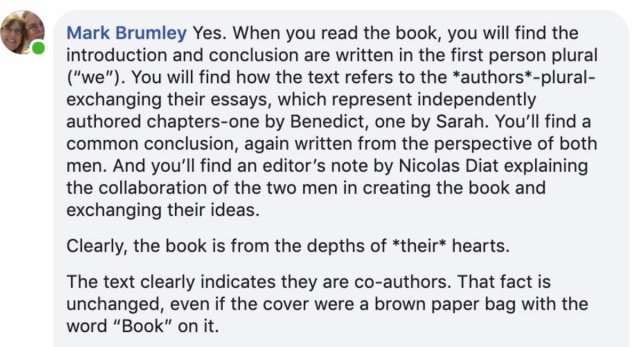 Another question is whether Ignatius Press has legal rights to Benedict’s text. The emeritus pope assigned all those right to the Vatican and apparently neither Benedict nor the Vatican signed a contract.

Okay. Gibson is supposed to be a journalist and not merely a commentator. If he is going to get legalistic, I wonder if he did any research into the question of whether or not it is a violation of the laws of the Vatican City State to slap someone.

In most places that could be assault. I suppose charges could be set aside in true cases of self-defense, of course. That’s a question worth asking. Did I miss coverage of that question?

There is soooo much speculation from these haters of the content of the Sarah/Benedict book, we may as well join them in wild speculation.

More on the Sarah-Benedict meeting over at LifeSiteNews