May, A Very Special Month

May is dedicated to The Blessed Virgin Mary

A short history:  The May devotion in its present form originated at Rome where Father Latomia of the Roman College of the Society of Jesus, to counteract infidelity and immorality among the students, made a vow at the end of the eighteenth century to devote the month of May to Mary. From Rome the practice spread to the other Jesuit colleges and thence to nearly every Catholic church of the Latin rite (Albers, “Bluethenkranze”, IV, 531 sq.). This practice is the oldest instance of a devotion extending over an entire month. Indulgences, three hundred days each day, by assisting at a public function or performing the devotion in private, plenary indulgence on any day of the month or on one of the first eight days of June under the usual conditions (Pius VII, 21 March, 1815, for ten years; 18 June, 1822 in perpetuum). 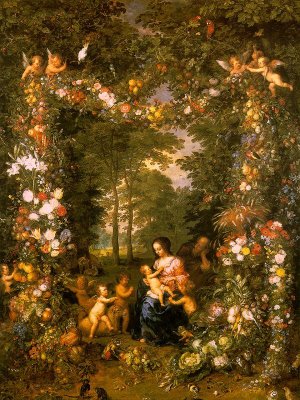 IESUS – MARIA – IOSEPH
Jesus, Lily of the Valleys
Mary, Queen of May
Joseph, Patron of Labourers
Orate pro nobis!
***
Chalice – Lily. The chalice is the lily, stylized and adapted to our use, and which, born from water, is proper for us to take to our lips.
*
The lily, and especially the water-lily, also called lotus or nenuphar, has always had a peculiar place in the symbolism of all religions. It projects its roots to substantial and deep regions, separated from our sight by these fluid, contemplative, mirror-like layers which are the domain of that which is contingent, unstable, of illusion and of this “time”, of this reflection which relates to several circumstances.
*
It is there, from below, that it feeds from this mysterious mud where the hand of the Creator searched and modeled the matter of man. Infixus sum, Psalm LXVIII tells us, in limo profundi and it is from there that Israel “will spring like a lily” (Os. xiv, 6). Whether in Egypt, in Assyria, in Persia, in India, or in China, it is the lily which stands as a support for all gods or which, between its fingers, recreates their souls by opening their nostrils. It is the lily which also has its place in the capitals of columns and in the arms of the candelabra, such a prominent place in the decoration of Ark and Temple.
*
On the elongated stem which it uses to reach the deep, to search for life through moment and accident, it blossoms, in a circle of geometrically composed petals: the flower, the essential and synthetic cup, the central point which bestows perfect meaning and is the supreme center of the calculated dispositions of a concentric universe.
*
Ego flos campi, say the Canticles (ii, 1) et lilium convallium.
*
Paul Claudel
Un poète regarde la croix
*
[RORATE CAELI]
Advertisement

This entry was posted in Uncategorized and tagged May, month of the Blessed Virgin Mary. Bookmark the permalink.

1 Response to May, A Very Special Month