“In Him Was Life” 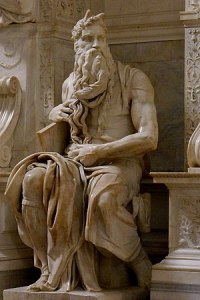 In a letter Sigmund Freud wrote to his friend Edoardo Weiss on April 12, 1933, he reminisced about a visit to the Roman church of San Pietro in Vincoli: “Every day for three lonely weeks of September 1913, I stood in church in front of the statue, studying it, measuring it and drawing it until there dawned on me that understanding which I expressed in my essay.” His obsession with the statue of Moses reflected the anxiety it had caused its sculptor, for—according to tradition—when it was completed Michelangelo struck the statue with his chisel: “Say something!” Genius could not give it the life of which God alone is the author. In a form more accessible to children, Michelangelo was Geppetto wanting his wooden doll to become a real boy. And in more exalted cadences, this was Ezekiel asking, “Can these bones live?”

“In him was life . . .” (John 1:4). At the Last Supper, the youngest apostle had pressed his head against Christ and could hear the beating of the Sacred Heart that had animated all creation. Only God can create life, but he has given his creatures the ability to “procreate.” This seems to have been the ultimate secret that he kept until he left this world in glory, promising to send to his believers his Holy Spirit, the bond of fecund love between him and his Divine Father. In the fourth century, Saint Gregory of Nyssa wrote “. . . he gave this glory to his disciples when he said to them: ‘Receive the Holy Spirit’ (John 20:22). Although he had always possessed it, even before the world existed, he himself received this glory when he put on human nature. Then, when his human nature had been glorified by the Spirit, the glory of the Spirit was passed on to all his kin, beginning with his disciples.”

When people ask if Christ had a sense of humor, remember this: a sense of humor is basically a balanced mind’s perception of imbalance. Unbalanced people laugh at what is not funny. Fanatics, by definition, are a little off kilter, and so they have no sense of humor. As the Perfect Man, Christ had a perfect sense of humor and must have smiled most broadly when he spoke to his gathered followers, the nucleus of his Holy Church, in anticipation of the new Pentecost that completed the symmetry of fifty days after the Resurrection. He told them: “All this I have spoken while still with you. But the Advocate, the Holy Spirit, whom the Father will send in my name, will teach you all things and will remind you of everything I have said to you. Peace I leave with you; my peace I give you. I do not give to you as the world gives. Do not let your hearts be troubled and do not be afraid” (John 14:25-27).