Picking up the Thread of the Narrative 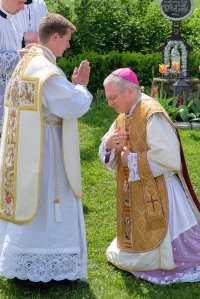 No small number of Catholics are deeply troubled by stories coming out of this period of repression of public church life, which has left most of our people deprived of the sacraments, in a good part of the world for some two months or more. It is something which demands sorting out and that even in a best case scenario, where bishops and priests have guided their people well through this trial. Unfortunately, without much reflection and in a sort of desperation or overconfidence in their discretionary powers, some people and some pastors have grasped at invention, thinking to square the circle, trying to keep upright an anxious model for hygiene while denying baptisms, confirmations, confession, weddings and funerals, and even rendering the reception of Holy Communion an unrecognizable novelty.

With any number of choices, I decided to take my cue for a response to what truly has often been a catastrophe from the measured report of comments by His Eminence Raymond Cardinal Burke reported in Lifesite News. There we find an assessment of the damage to the faith resulting from a number of liturgical accommodations reported here and there during the “Corona Lockdown”. As read elsewhere again in Lifesite News, the Reverend Nicola Bux states, rightly and clearly, that more often than not, when we turn church into a scene which takes its cues from your neighborhood pharmacy, we are dealing with sacrilege. Real damage has been done to people’s sensibilities concerning the Real Presence of Christ in the Eucharist.

My question would be: how do you teach the faith, proclaim the Gospel, lead people to Christ when you have effectively trashed or obscured the meaning of all that is sacred? Maybe more to the point, after so much accommodation, how do you make amends, reparation even, and reestablish church life as it should be? The gloves, the masks, the packaged delivery of Holy Communion, and on and on, cannot help but to have disfigured the Face of Christ. What to do?

I am hoping for the appearance of that prophet sent by God, of many prophetic men and women everywhere in the Catholic world, who will call us to that needed penance whereby we can rightly make reparation. True love, both toward God and neighbor, reveals itself in reverential fear. I have not yet loved enough if I do not profoundly fear offending God and doing harm to those nearest and dearest to me.

Join me in watching and praying for the appearance on the scene of these prophets, who will lead us to make reparation not only for the sacrileges committed during these times of trial, but in many parishes and dioceses, even in monasteries, convents and religious houses now for decades. We seek the beautiful Face of Christ and we extend a hand in supplication to the Mother of God, beseeching Her to intercede for us before the Throne of Her Son. Lord forgive! Mother Mary, help your children in their need!

This entry was posted in Uncategorized and tagged Archbishop Thomas Gullickson, Covid 19, Reparation and Penance, Sacraments of the Church, sacrilege, Swiss Nuncio. Bookmark the permalink.