17th September, The Imprinting of the Holy Stigmata on St Francis, Confessor 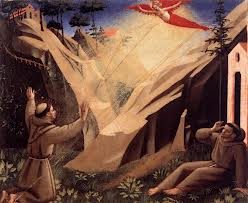 Two years before his death, St. Francis retired to mount Alverno where he began a fast of 40 days in honour of St. Michael the archangel. And lo! in the midst of his meditation he saw a figure like a seraphim with six wings dazzling and burning, whose feet and hands were nailed to a cross. Aware that suffering is incompatible with the immortality of a seraphic spirit, he understood this to mean that he would become more like Jesus and bear his cross after Him (Gospel), not by physical martyrdom, but by a mystical kindling of divine love.

And in order that this crucified love might become an example to us all, five wounds resembling those of Jesus on the cross appeared on his feet, hands and side. From the latter blood flowed abundantly. The facts were so fully authenticated later, that Benedict XI ordered them to be commemorated every year, and Paul V to kindle in the faithful the love of Jesus crucified, extended the feast to the whole Church.

Mihi autem absit gloriari, nisi in cruce Domini nostri Jesu Christi: per quem mihi mundus crucifixus est, et ego mundo. * Voce mea ad Dóminum clamávi: voce mea ad Dóminum deprecátus sum.
But God forbid that I should glory, save in the Cross of our Lord Jesus Christ: by whom the world is crucified to me, and I to the world. I cried to the Lord with my voice: with my voice I made supplication to the Lord. ( Introit: Galatians 6:14, and Psalm 141:2)

Domine Jesu Christe, qui frigescente mundo, ad inflammandum corda nostra tui amoris igne, in carne beatissimi Francisci passionis tuae sacra stigmata renovasti: concede propitius: ut ejus meritis et precibus crucem jugiter feramus, et dignos fructus paenitentiae faciamus.
O Lord Jesus Christ, who when the world was growing cold, in order that our hearts might burn anew with the fire of Thy love, didst in the flesh of the most blessed Francis renew the sacred marks of Thy passion; mercifully grant, that by his merits and prayers, we may ever carry our cross, and bring forth fruits worthy of penance. (Collect)

Deus, qui mira crucis mysteria in beato Francisco Confessore tuo multiformiter demonstrasti: da nobis, quaesumus, devotionis suae semper exempla sectari, et assidua ejusdem crucis meditatione muniri.
O God, who in divers ways, didst show in blessed Francis, Thy confessor, the wonderful mysteries of Thy cross, grant, we beseech Thee, that we may ever follow the example of his devotion, and be strengthened by constant meditation on that same cross. (Postcommunion)

Saint Bonaventure, biographer of Saint Francis of Assisi, wrote that two years before his holy death he had been praying on Mount Alverno in a solitary retreat, where he had gone to fast for forty days in honour of the Archangel Michael. No one ever meditated more than Francis on the Passion of his Lord. During his retreat he beheld in vision a six-winged Seraph attached to a cross, and received at the same time a painful wound of the heart, which seemed to transpierce it. When the vision ended his own hands and feet bore the marks of the angelic crucifixion which he had seen in the vision. He understood by his vision that the soul must come to resemble Christ by the ardours of its interior fire, rather than by any physical, exterior means. We reproduce here a meditation of the saintly 19th century Abbot, Dom Guéranger of Solemnes in France:

The Feast of the Stigmata of Saint Francis, whom we will soon honour again on his feast of October 4th, is not only to glorify a Saint; it commemorates and signifies something which goes beyond the life of any single man, even one of the greatest of the Church. The God-Man never ceases to live on in His Church, and the reproduction of His own mysteries in this Spouse whom He wants to be similar to Himself, is the explanation of history.

In the thirteenth century it seemed that charity, whose divine precept many no longer heeded, concentrated in a few souls the fires which had once sufficed to inflame multitudes. Sanctity shone as brilliantly as ever, but the hour for the cooling of the brazier had struck for the peoples. The Church itself says so today in its liturgy, at the Collect: Lord Jesus Christ, when the world was growing cold, You reproduced the sacred marks of Your passion in the body of the most blessed Francis, in order that Your love might also set our hearts afire.’ The Spouse of Christ had already begun to experience the long series of social defections among the nations, with their denials, treasons, derision, slaps, spittings in the very praetorium, all of which conclude in the legalised separation of society from its Author. The era of the Passion is advanced; the exaltation of the Holy Cross, which for centuries was triumphant in the eyes of the nations, acquires in the sight of heaven, as the Angels look down upon it, the aspect of an ever closer resemblance with the Spouse to the sufferings of her crucified Beloved.

Saint Francis, loved today by all who know of him — and few there are who do not — was like precious marble placed before an expert sculptor. The Holy Spirit chose the flesh of the seraph of Assisi to express His divine thought, thus manifesting to the world the very specific direction He intends to give to souls thereafter. This stigmatization offers a first example, a complete image, of the new labour the divine Spirit is meditating — total union, on the very Cross of Christ itself, of the mystical Body with the divine Head. Francis is the one honoured by this primacy of choice; but after him the sacred sign will be received by others, who also personify the Church. From this time on, the Stigmata of the Lord Jesus will be at all times visible, here and there on this earth.

This entry was posted in Uncategorized and tagged Dom Guéranger of Solemnes, St Bonaventure, St Franics of Assisi, Stigmata. Bookmark the permalink.