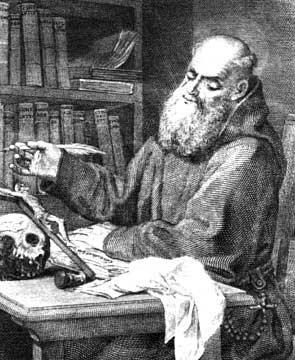 Born in Brindisi in Italy and christened Julius Caesar, the future saint’s father was Guglielmo Rossi, and his mother Elisabetta Massella, both exemplary Christians.

His parents entrusted the boy’s education to the Conventuals of Brindisi where he showed early signs of a shimmering intelligence and a gift for oratory.

When twelve, his father died, and he pursued his studies in Venice with the Clerics of St. Mark, under the supervision of an uncle. In 1575 he was received into the Capuchin Order and was given the name of Lorenzo. Once professed, Brother Lorenzo studied philosophy and theology at the University of Padua.

Lawrence had a prodigious memory, and mastered most of the European languages and Semitic tongues. It is also said that he knew the entire original text of the Bible, a feat deemed miraculous. He is also renowned for his complete refutation of the doctrines of Martin Luther, as well as his work in defense of the Immaculate Conception of Mary of whom he was an ardent devotee, and in whose name he worked all his miracles.

In his lifetime he filled all the posts of his order. As a great preacher, he was invited to preach all over Europe. Always seeking to move hearts, he adapted his preaching to his audience with enormous success. The sermons he left fill no less than eight volumes. Because of his knowledge of Hebrew, Pope Clement VIII assigned him to the instructions of the Jews, and due to his knowledge of the language, and powerful reasoning combined with his great kindliness, brought many into the Faith.

He founded houses in Germany, Austria and Czechoslovakia, despite many obstacles placed by heretics. As the fame of his sanctity preceded him wherever he went, people flocked to hear his sermons.

In 1601 Lawrence served as chaplain for the army of Rudolph II, the Holy Roman Emperor. In this capacity he was present at the battle of Albe-Royal against the Ottoman Turk’s force of 80,000, while the Christian army had 18,000.  Prior to the battle, hesitating at these odds, the leaders sought the holy chaplain’s advice. The saint took full responsibility for the outcome, and in a glowing speech communicated to them his own confidence. Aged and enfeebled, he mounted a horse, and, crucifix in hand, led the charge. The Turks were defeated, but regrouping, attacked again a few days later. Again the chaplain led the attack to complete victory.

O God, who for the glory of your name
and for the salvation of souls
bestowed on the Priest Saint Lawrence of Brindisi
a spirit of counsel and fortitude,
grant, we pray, that in the same spirit,
we may know what must be done
and, through his intercession,
bring it to completion.
Through our Lord Jesus Christ, your Son,
who lives and reigns with you
in the unity of the Holy Spirit,
one God, forever and ever.
Amen.

This entry was posted in Uncategorized and tagged Catholic prayers, Catholic Saints, St Lawrence of Brindisi. Bookmark the permalink.

1 Response to St. Lawrence of Brindisi