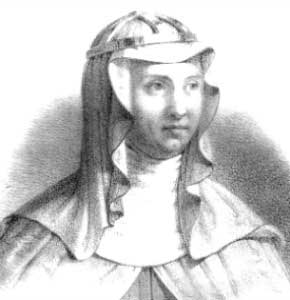 At fourteen she was married to young Ulf Gudmarsson, to whom she was happily married for twenty-eight years and had eight children, four boys and four girls, one of whom was St. Catherine of Sweden.

In 1335, she was appointed lady-in-waiting to King Magnus II’s bride, Blanche of Namur, and she spent years at court trying to reform Magnus’ weak, and at times, wicked ways, and the queen’s often well-meaning, but irresponsible, bend.

Though Bridget’s famous visions were already under way at this time, spanning subjects from personal hygiene to politics, she did not have great success with her royal “charges”, and was often seen as a “dreamer.”

After her husband’s death in 1344, she founded an order of women and another of men to support them spiritually. When her order was established, she traveled to Rome accompanied by her daughter Catherine and some disciples, to seek approval of her Rule. But she was never to return to her native Sweden.

In Rome, she worked to bring back the Papacy, then in the French city of Avignon, to the Eternal City. Her visions and prophecies, dealing with the burning political and religious issues of her time, continued and so increased that, alarmed, she submitted them to the direction of Canon Matthias of Linkoping who pronounced them to be of God. Peter, Prior of Alvastra, recorded these visions in Latin.

Her order was only approved by Pope Urban V in 1370.

In 1373 she made a pilgrimage to Jerusalem, with Catherine and three of her sons. At Naples, Charles, her favorite son, became entangled with Queen Joanna I who wanted to marry him despite both being already married (Joanna thrice). Anguished, Bridget stormed heaven, and Charles, struck by a fever, after two weeks died in his mother’s arms.

Returning from Jerusalem, Bridget, already ailing, received the last rites from her faithful friend, Peter of Alvastra, and died on July 23 at the age of seventy-one.

O Jesus, sweetness of hearts, delight of the spirit, by the bitterness of the vinegar and gall which you did taste on the Cross for Love of us, grant us the grace to receive worthily your Precious Body and Blood during our life and at the hour of our death, that they may serve as a remedy and consolation for our souls. Amen.

(By St Bridget of Sweden)

May the mantle of your peace cover those who are troubled or anxious, and may peace be firmly rooted in our hearts and our world.
Inspire us to act justly and to reverence all God has made.

Bridget, you were a voice for the wounded and weary.
Strengthen what is weak within us.
Calm us into a stillness that heals and listens.
May we grow each day into greater wholeness in mind, body and spirit. Amen.

This entry was posted in Uncategorized and tagged Catholic Saints, St Bridget of Sweden. Bookmark the permalink.

2 Responses to St. Bridget of Sweden