The Holy Martyrs of Walsingham

A recent perusal of the wealth of British Catholic Blogs led me to an author who is undertaking a pilgrimage to Walsingham in the near future. Mention was made, very briefly, of the Walsingham Martyrs.

Last year I too made this pilgrimage with a group of Oblates from the Abbey in which we had all made our Oblation. It was my first time in Walsingham, and we had just two full days to experience the spirituality in this small Norfolk town. Whilst evidence of the Reformation and the Dissolution is patently obvious in the ruins of the Priory, the appearance  of a ‘Martyrs Field’ was intriguing. Now, that there were many Martyrs during these Penal times in incontrovertible, but I was completely ignorant of these brave Catholic men and women who had met their grisly ends at Walsingham.

That the Martyrdom’s at Walsingham where associated with The Pilgrimage of Grace, is I am sure known to many.

e Pilgrimage of Grace was a Tudor rebellion that started in East Yorkshire in 1536. The loss of the monasteries during the dissolution had had a disastrous effect on the populace who, in many cases had relied on these foundations for their work and livelihoods. The rebellion  in Lincoln in 1536 demanded freedom to worship as Catholics and an end to the Dissolution.

Named by its leader, Robert Aske of Aughton, it mustered on the Western edge of the Yorkshire Wolds at Arrass Hill in October when it numbered 10,000 men. It then split into two groups. One went to Royalist Hull which surrendered after a 5 day siege and the other went to York, spending time at Pocklington on the way. York surrendered without a fight as did Royalist Pontefract Castle later. The rebellion attracted people from throughout East Yorkshire. By the time the two groups met again at Doncaster there were said to be 40,000 men assembled to march against Henry VIII. Henry sent his army to Doncaster to face the rebels, led by the Duke of Norfolk. The King’s army was only 8,000 strong and would have fallen had the Duke of Norfolk not, duplicitously, agreed to the leaders demands. Having trusted Norfolk, the Pilgrimage dispersed. Some months later it rose again under new leadership as the King had not acceded to their demands. The original leaders were arrested. Robert Aske was hanged in chains from York Castle and Sir Robert Constable was hanged in chains from the walls of Hull.

Contemporary and modern historians agree that if the rebellion had continued it could have dethroned Henry VIII.

The ‘Walsingham Plot’ took place just before the dissolution of the Augustinian Priory  and the destruction of the Holy House. The plot, which began in November 1536, eventually drew in about thirty conspiritors. They planned to raise the people of north Norfolk, in the same way that the people of Lincolnshire had risen, and in conjunction with the much greater ‘Pilgrimage of Grace’, and then to muster the larger part of East Anglia so as to challenge the reforming policies of Henry VIII. The conspiracy was leaked to London and within days most of the conspiritors had been arrested and taken to Norwich for trial. Twelve of these were sentenced to death, some to be hung, others to be hung, drawn and quartered. Two of them were brought back to Walsingham to be executed; Canon Nicholas Mileham, the sub-prior of Walsingham Priory, and George Guisborough, a yeoman and chorister of Walsingham village. On Wednesday 30th April 1537 both men were hung, drawn and quartered just outside the village in what is now known as ‘Martyrs Field’. Their heads were then placed on the Priory Gatehouse. 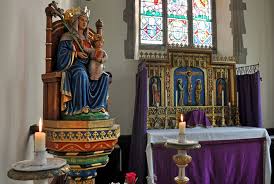 Walsingham was chosen for these brutal executions to impress on the people of Norfolk that the power of the King was unassailable. The image of Our Blessed Lady – that for centuries had been loved and venerated in its Holy House, and where so many prayers had poured forth, was taken to London along with statues of Our Lady of Basingstoke, Caversham, Ipswich, Penrhys, Willesden, Worcester and many others, to the house of the Lord Privy Seal, Thomas Cromwell, at Chelsea Manor, and burnt in his presence. May God forgive them.

The exact number of martyrdom’s that took place is unclear, but it behoves us all, as we set out in peace to attend Holy Mass, our journey’ usually uneventful, that in our green and pleasant land it was not always so, and we owe much to our brave fore bearers who kept the faith alive in our darkest times.

5 Responses to The Holy Martyrs of Walsingham