The Heart of the Church is the Eucharist

By Father Ladis J. Cizik at The Remnant: 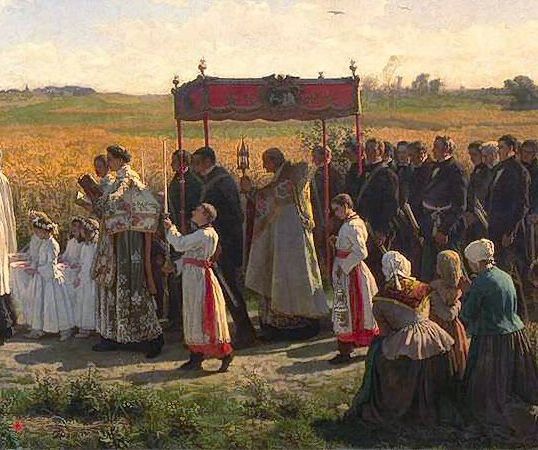 As Catholics we must believe with ALL of our hearts, minds, and souls that at every Holy Sacrifice of the Mass, the validly ordained Priest changes bread and wine into the Body, Blood, Soul and Divinity of Christ, in what is defined as ‘Transubstantiation.’ This is a true MIRACLE that has been done “in remembrance” of Christ since He instituted the Mass at the Last Supper on Holy Thursday. This belief is under attack today.

Sadly, there seems to be many in the last fifty years of Church history who demonstrate by their mannerisms in the presence of the Eucharistic Lord that they do not believe in the Real Presence of Christ in the Eucharist. Traditions that protect belief in the Real Presence in the Traditional Latin Mass communities are no longer present in most Novus Ordo venues, such as: receiving Holy Communion exclusively on the tongue while kneeling; using a Paten under the chin of the communicant to safeguard Particles of the Sacred Host; genuflecting before the Tabernacle; kneeling for exposition of the Blessed Sacrament; receiving Holy Communion only when in ‘a state of grace;’ and showing a decorum of reverence and silence before the Most Blessed Sacrament in the Tabernacle.

As Our Lord did for doubting Thomas, who had to see to believe, God provides proof of our Catholic beliefs in our day and time. Let us consider the ‘Eucharistic Miracle of Lanciano’ where the Sacred Host not only miraculously changed into the Most Holy Body and Blood of Christ, but also miraculously changed into the appearance of human heart tissue and blood. We will also discuss two disturbing modern-day Eucharistic Miracles that also involve human cardiac tissue.

The story of Lanciano can begin at Calvary on Good Friday. It is said that the soldier who pierced the Sacred Heart of Jesus with a lance was a nearly blind Roman centurion by the name of Longinus. Some of the Precious Blood from the wounded side of Christ came into contact with his eyes and he was supernaturally healed, converted to Christianity and is said to have died a martyr.

Today, at Saint Peter’s Basilica in Rome, there is an heroic larger-than-life statue sculpted by Bernini of Saint Longinus, holding his spear outstretched, seemingly proclaiming what could have been his words from Sacred Scripture: “Indeed this man was the Son of God” (Mk 15:39).   The birthplace of Saint Longinus is said to be in Lanciano, Italy. 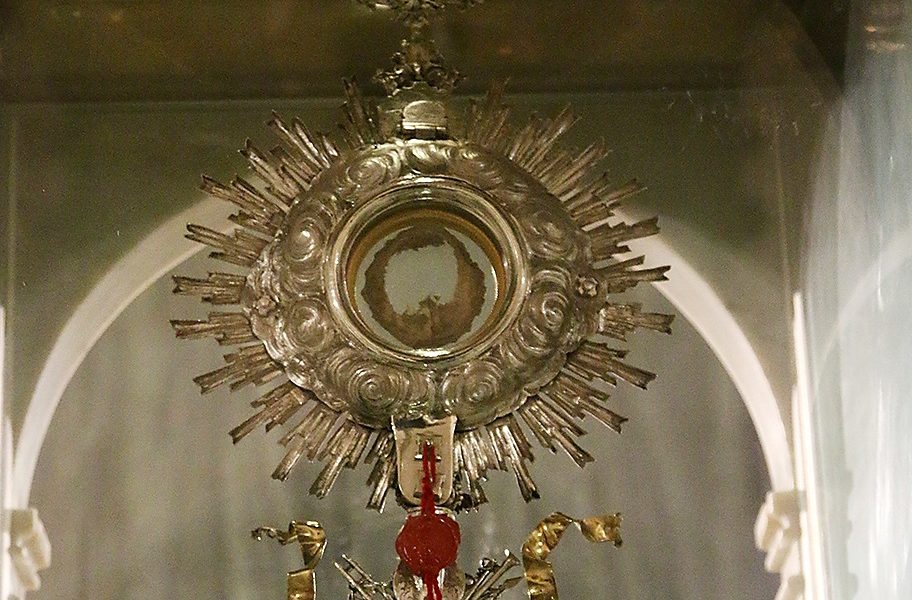 Lanciano is also the home of the world-renowned and Church-approved “Eucharistic Miracle of Lanciano.”   Heaven responded to an eighth century Priest who had doubts about the Real Presence of Christ in the Eucharist when, at the words of Consecration, the appearance of bread changed to Flesh and the sight of Blood replaced the appearance of wine. In recent times, a scientific investigation of the Eucharistic Miracle revealed that the Host is a thin cross-section of a human heart, consisting of living cardiac tissue. No human hand could have cut such an expert cross-section of the human heart, excluding the possibility of fraud.

The blood type of this Sacred Heart of Christ matches the blood type of the Precious Blood (AB positive) which has the chemical composition of living blood. Scientists could also not explain why the Flesh and Blood did not decay after over 1,000 years. This Eucharistic Miracle can still be seen and venerated today in Lanciano, Italy at the Church of San Francesco in Piazza Plebiscito.

It is also interesting to note that the Blood in the Chalice soon divided into five clots of irregular size and shape, reminiscent of the Five Wounds of Christ. It was discovered that the combined weight of all five portions of Blood equaled the individual weight of any one of them. This was a miraculous confirmation of Catholic Church teaching that Jesus is equally Present in the smallest particle of a Host as He is in a whole Host. This affirms that everyone MUST safeguard even the smallest single particle of the Sacred Host.

In recent times, there were two Church-approved Eucharistic Miracles that are signs for our troubled times. In 2008, in Sokolka, Poland, the Consecrated Host changed its physical appearance to Flesh and Blood.   Laboratory analysis confirmed that the flesh was human cardiac tissue. But this time, unlike Lanciano many centuries ago; instead of tissue from a vibrant heart, the tissue in Sokolka was from a Heart that was dying. In addition, in 2013 in Legnica, Poland a Consecrated Host changed in appearance. It was medically examined and found to contain fragmented parts of tissue similar to human heart muscle which bore signs of distress.

Perhaps these recent Eucharistic Miracles evidencing trauma to the Sacred Heart of Jesus are a warning that the Mystical Body of Christ, the Church, is dying today for a lack of the One True Faith in the hearts of many of its members. We need to strengthen the Traditional Catholic Faith, especially in regard to the Real Presence of Christ in the Eucharist, in ALL members of the Church.

The Society of Saint Pius X (SSPX) addressed the question of ‘how can God allow a Eucharistic Miracle to happen in the context of the New Mass’ in their online newsletter (hyperlink to: https://sspx.org/en/news-events/news/new-eucharistic-miracle-poland). Of the Novus Ordo Mass, the SSPX article notes that: “… we do not say that all the Masses celebrated with this rite are invalid.” They continue: “In fact, Church history shows that Eucharistic Miracles – which consist precisely in the appearance of other species – often happen because of doubt or irreverence. At Lanciano, the priest doubted the Real Presence.” 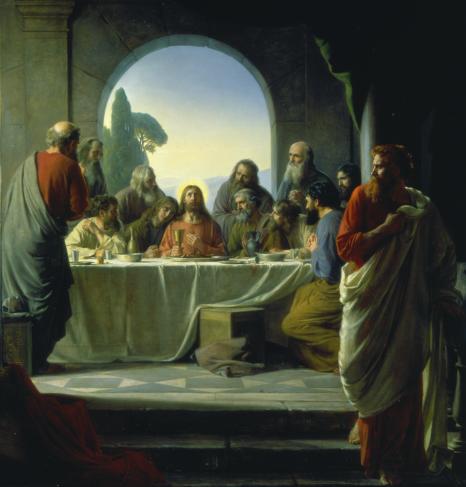 There are over 150 Eucharistic Miracles that have taken place since the time of Christ (hyperlink to http://www.therealpresence.org/eucharst/mir/engl_mir.htm ). Of these Church-approved Eucharistic Miracles, all of those so investigated have the same Blood Type: AB positive. AB Positive is that blood type which is most prevalent in the Middle East, where Jesus lived. AB positive is also the blood type on the Shroud of Turin. Almighty God is surely using the Precious Body and Blood of Jesus Christ to write straight through the crooked lines of history, affirming both the Real Presence of Christ in the Eucharist and the unique status of the Catholic Church as the One True Church founded by Christ.

The thousands of groupings of Protestants that denominated from the Catholic Church have no such Eucharistic Miracles because they do not have validly ordained Priests and thus do not have the Eucharist.   Their bread and wine remain just bread and wine no matter what words that their ministers pronounce. When Protestant groups separated from the Catholic Church they lost the fullness of the One True Faith founded by Christ and, no matter how sincere they may be, they do NOT have the Most Blessed Sacrament.   Hence, the Traditions that protect belief in the Real Presence found throughout the Catholic Church for centuries, prior to the last fifty years, were rejected by the Protestant denominations. We should not follow the path of Protestants.

Catholics take John Chapter Six literally: “Except you eat the Flesh of the Son of Man and drink His Blood, you shall not have life in you … For My Flesh is meat indeed: and My Blood is drink indeed” (Jn 6:54-56). Many of the disciples could not accept this, including Judas, who would betray Jesus over his lack of belief in the Real Presence of Christ in the Eucharist (Jn 6: 65).   Do not follow the path of Judas.

The Heart of the Church is the Eucharist. Do not suffer any attacks on this Most Sacred Heart. Know your Traditional Catholic Faith, love this Faith, and share it with others. That will bring you peace of heart in this life, and one day happiness forever in the life of the world to come.

3 Responses to The Heart of the Church is the Eucharist