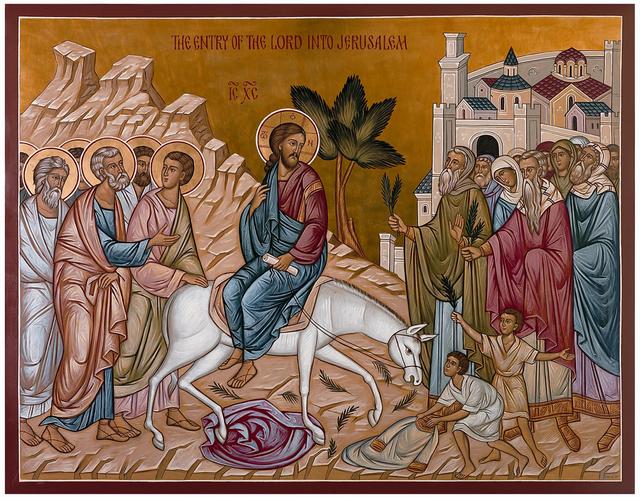 CP&S has previously presented sermons by Father Michael Chua, now of the parish of Jesus Caritas in the Archdiocese of Kuala Lumpur in Malaysia.

Father has prepared an exceptionally good sermon for today, Palm Sunday. He speaks of the two “processions” described in the two Gospel readings we have today.  One is an exaltation, where Christ rides from the Mount of Olives to Jerusalem on a donkey and is acclaimed by the disciples along the way. The second “procession” is one of emptying, where our Lord proceeds from the Praetorium to the utter humiliation of Calvary.

It’s interesting that Christ came down a mountain for exaltation but went up a mountain to His abasement.

Father ties all this in with a meditation on the hymn (which pre-dated St Paul)  in his Epistle today to the Philippians about how Christ emptied himself to be finally exalted,  with the suggestion that we need to do much the same in our daily lives. He even gives us a pointer (involving leaving little notes to ourselves in our two front pockets, no less) on how we may achieve this, as suggested by a late eighteenth century Polish rabbi, Rabbi Bunim of P’shiskha.

… but the two processions also provide us with a greater contrast. They take different directions – literally, there is a downward movement, from the top of the Mount of Olives to the gates of the City of Jerusalem; and then there is an upward movement, from the Praetorium to the Hill of Calvary. Figuratively, these two directions point to something much more profound than movement between geographical and archaeological localities. It speaks of the vocation and mission of Christ. St Paul, in the beautiful hymn we just heard in the second reading written to the Philippians, provides us with the two major themes of the path chosen by Jesus, his descent and ascent point to the emptying and the exaltation. In this V shaped piece of poetry, St Paul maps the coming to earth of Jesus Christ, his hard hit at the rock bottom of his death, and God’s raising him again so that all creation sees who he is and has been all along. In His humiliation He was exalted; in His exaltation He would be humbled.

It’s a minor masterpiece in my opinion. Please read it all at Father’s own blog.

…we remember once again the promise of Palm Sunday, and we remember that this world and universe was created for our sake. And never, never, forget that it is for our sake that the Son chose to humble and empty Himself so that we may be filled with everlasting life. With that assurance, let us accompany Jesus to the cross.