On February 22nd the Church celebrates the ancient feast day of the Chair of St. Peter. Since early times, the Roman Church has had a special commemoration of the primatial authority of St. Peter and the Chair symbolises the seat from which the Pope exercises this authority.

“We shall find in the Gospel that Jesus Christ, willing to begin the mystery of unity in His Church, among all His disciples chose twelve; but that, willing to consummate the mystery of unity in the same Church, among the twelve He chose one. He called His disciples, said the Gospel; here are all; and among them He chose twelve. Here is the first separation, and the Apostles chosen. And these are the names of the twelve Apostles: the first, Simon, who is called Peter. (Mt. 10, 1-2)” – [Excerpted from The See of St. Peter, Jacques Bossuet.]

Unfortunately, this is how Pope Francis celebrated the feast commemorating Peter’s authority over the whole Church, watching a circus show of skimpily dressed artists… 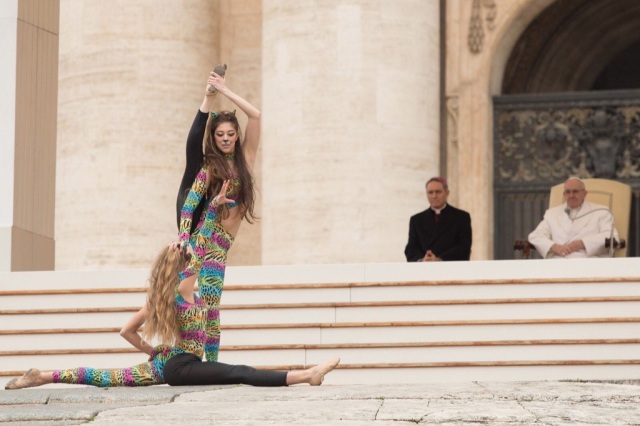 Claire Chretien on LifeSiteNews asks: “Whose idea was today’s performance? It seems like a strange way to commemorate a Catholic feast day dedicated to the pope’s authority and sacred duties.” Indeed!

But inside the Basilica of St Peter, he to whom Our Lord Jesus Christ entrusted the ‘keys’ to the One Holy Catholic and Apostolic Church to safeguard for all time, the statue of St. Peter was decked out in fine robes befitting of this significant feast.

From The New Liturgical Movement:

“The feast of St Peter’s Chair is not only the commemoration of his ministry as chief of the Apostles, but also the feast of a relic long reputed to be his actual throne. Although it never attained to the popularity of the Veil of St Veronica, the Vatican Basilica’s relic par excellence in the High Middle Ages, it was regularly seen and venerated by the faithful, being first explicitly named “the Chair of St Peter” in 1237. Before the long period of the Popes’ residence in Avignon, (during which many medieval customs of the Papal liturgy disappeared,) the Pope was enthroned on the relic for part of his coronation ceremony, and used it as his liturgical throne in the Basilica on the feast of February 22. Its veneration continued through the Renaissance and the Counter-Reformation periods, but since 1666, it has been kept within Bernini’s Cathedra Petri at the back of the Vatican Basilica, and very rarely brought out. The very magnificence of the sculpture, and its presence as the visual culmination of the church, has overwhelmed its purpose as a reliquary; all the more so since the relic itself cannot be seen within it, and has so rarely been removed from it for viewing. It was last exposed in 1867, at the behest of Blessed Pope Pius IX, during the celebrations of the eighteenth centennial of the martyrdoms of Ss Peter and Paul. A copy (pictured below) is displayed in the treasury of St Peter’s, but with little to indicate the prominence which the original formerly held.”

Let us pray that Pope Francis will take greater care in fulfilling the mission bestowed upon him.